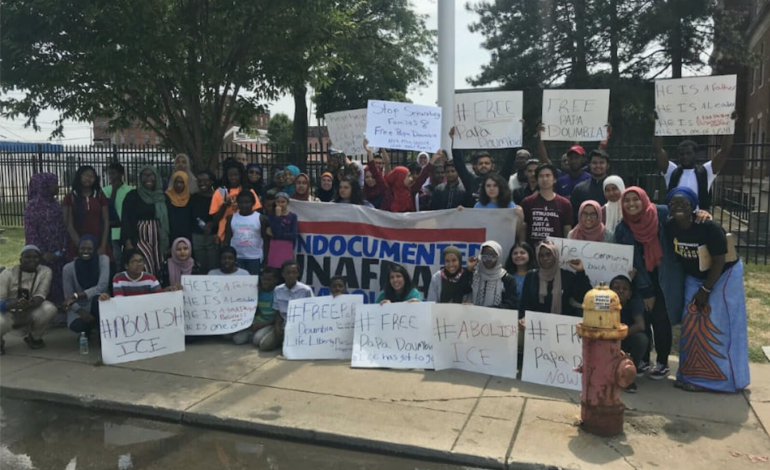 DETROIT — The Detroit branch of the Immigration and Customs Enforcement agency (ICE) has detained a Brighton-area father and business owner for the last two weeks.

Fanta Doumbia told The AANews that her father, Banny Doumbia, originally from Ivory Coast, West Africa, was detained at his regular check-in at ICE on Friday, Aug. 3.

“This man has been here for almost 30 years,” she said. “He’s been here longer than he was in the country he was born in.”

Doumbia said the sudden detention of her father, who has been “under supervision” by ICE for the past 14 years and attends every one of the regular ICE check-in and home-visit appointments, shocked and confused the family.

“Why would you detain someone who’s always at his appointment, who misses his Friday prayer to wait for ICE to come do a home visit, someone who is fully compliant and not a flight risk?” she asked. “What’s the point of holding him in there? It’s so complex, but we don’t understand.”

“On Aug. 3, Banny Doumbia was arrested by ICE as a convicted aggravated felon and unlawfully present citizen of the Ivory Coast,” ICE spokesman Khaalid Walls said in a statement to The AANews. “He is currently subject to an administrative removal order. ICE released him on an order of supervision in January 2004 because the agency was unable to obtain a travel document from his home country to effect his removal.

“Doumbia has multiple federal felony convictions for offenses including theft and bank fraud,” the statement continued. “He will now remain in ICE custody pending removal from the U.S.”

Fanta Doumbia told The AANews her father committed those crimes in 1999, when he first arrived in the U.S., and served time in prison from 2000 to 2004.

She said ICE told the family he’s being held over a travel document and not because of his previous felonies for which he’d already served his time.

“I don’t like the way they’re trying to smear my dad’s name,” she said.

She said her father’s confinement affects the family’s finances heavily since he is the sole breadwinner.

“He’s a home owner,” she said. “All of his children are in college — he is the one who pays for all of that.”

Banny Doumbia’s four children are all American citizens. Fanta will graduate with a master’s degree in social work from University of Michigan in December, while her sister Nambintou will graduate with her bachelors’ in sociology and African American studies with high honors from Wayne State. Assita, the second-born daughter, will begin her first year at Henry Ford College in September. The youngest child, 10-year-old Maedou, will continue his primary education.

“Don’t I, as a U.S. citizen, deserve to have my father home?” Fanta Doumbia asked. “It breaks our heart that our father, who encouraged us to go to school and excel high, will not be present at our graduation.”

She said the family is currently dealing with a bill from DTE with a “shut-off” notice that she can’t pay because the bill is in her father’s name..

“Our dad granted us the privilege to not have to worry about those things and to focus on our studies,” she said. “All of our hard work is going to have to be put on hold because we’re going to have to start thinking about finances.”

She added that she and her sister Nambintou are considering taking their last semester of college off to help support their mother and siblings.

Doumbia described her father’s presence in the community as a leader with two businesses, a garage service and car service which have employed many people.

She said she feels like ICE has been targeting the African community in the Metro Detroit area.

“Our community is starting to get smaller and smaller,” she said. “My uncle and aunt were detained and deported this year.”

Doumbia told The AANews that her father was originally detained at the Monroe County Jail, but has now been transferred to a detention center in Battle Creek, which has more strict visitation policies.

“When he was in Monroe it was already stressful, because we could only visit him two people at a time for thirty minutes on Saturday and Sunday,” she said.

She said the new detention center wouldn’t allow in-person visits and that the family was instructed to create an online account to have formal video-chat visits with Banny Doumbia.

“The system says that when immigrants are detained it’s not like prison, but what is this?” she asked.

Doumbia said her mother, Mariame, who is also under ICE supervision, is worried about being detained and deported at one of her own meetings.

“It has caused her anxiety so high that she is unable to sleep at night,” she said.

The family, along with other local activists, held a protest at ICE’s Detroit office on Friday, Aug. 10, demanding Banny Doumbia’s release.

Doumbia said around 100-150 people participated in the protest. Rashida Tlaib, who is running unopposed for state representative in Michigan’s 13th district, also attended.