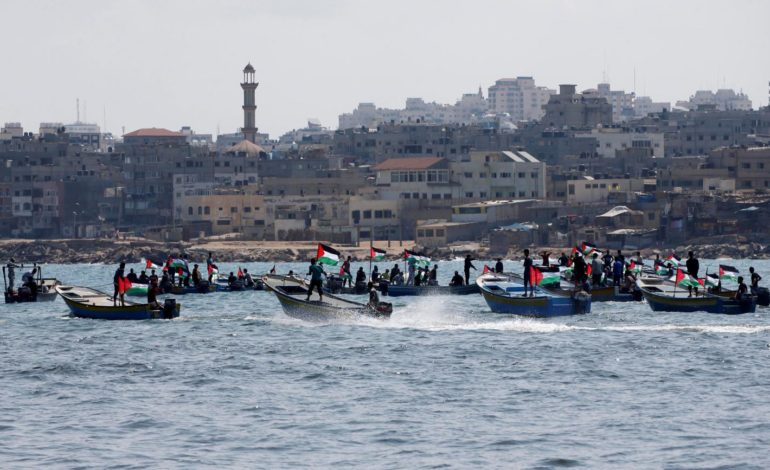 Boats off the Gaza coast carry Palestinians wounded in a Gaza Strip confrontations. They were hoping to break Israel’s maritime blockade on Gaza to Cyprus, but were intercepted by Israeli naval vessel - Reuters

When Mike Treen, the national director of the “Unite Union” in New Zealand arrived at the airport in the capital, Auckland, on August 1, a group of people were anxiously waiting for him at the terminal with Palestinian flags and flowers. They hugged him, chanted for Palestinian freedom and performed the customary native Haka dance.

For them, Mike, as all of those who set sail aboard the Freedom Flotilla to Gaza last July, were heroes.

But the truth is Mike Treen and his comrades were not the only heroes for braving the sea with the aim of breaking the hermetic Israeli military blockade on the impoverished and isolated Gaza Strip. Without those who were present at the Auckland airport upon Mike’s arrival and without the thousands of supporters all across the world who have mobilized as a community — held numerous meetings, raised funds, created a powerful media discourse and so on — Treen’s attempted trip to Gaza would not have been possible in the first place.

The first boats to successfully break the Gaza siege, in October, 2008, were the “Free Gaza” and the “Liberty.” They carried 44 people from 17 countries. The activists wanted to push their countries to acknowledge the illegality of the Israeli blockade on Gaza and to, eventually, challenge the siege.

Their triumphant arrival in Gaza 10 years ago marked a historic moment for the international solidarity movement, a moment, perhaps, unparalleled. Since then, Israel has launched several massive and deadly wars on Gaza. The first war took place merely weeks after the arrival of the first boats, followed by another war in 2012 and, the deadliest of them all, in 2014. The siege grew tighter.

Also, since then, many attempts have been made at breaking the siege. Between 2008 and 2016, 31 boats have sailed to Gaza from many destinations, all intercepted, their cargo seized and their passengers mistreated. The most tragic of these incidents was in May 2010 when the Israeli navy attacked the “Mavi Marmara” ship — which sailed alongside other boats — killing 10 activists and wounding many more.

Even then, the stream of solidarity boats continued to arrive, not only unhindered by the fear of Israeli retribution, but also stronger in their resolve. Palestinians consider the killed activists as “martyrs” to be added to their own growing list of martyrs.

However, none of the boats made it to Gaza; so why keep on trying?

Last May, I arrived in New Zealand as part of a book tour that took me to other countries as well. However, in New Zealand, a relatively small Pacific island with a population that does not exceed 5 million people, the solidarity with Palestine was exceptional.

I asked about the strong Palestine solidarity work in New Zealand, inquiring with the coordinator for “Kia Ora Gaza”, Roger Fowler, who, at the time, was busy with final preparations for the Freedom Flotilla.

In New Zealand, he said, “For many years support for the Palestinian struggle lingered, often perceived as being too distant and falsely portrayed as being ‘too complicated.’ But the global outrage at Israel’s murderous attack on the “Mavi Marmara”-led humanitarian flotilla to Gaza in 2010 was a major turning-point that changed all that.”

Fowler, himself, along with other New Zealand activists joined the “Lifeline to Gaza” convoy soon after the attack on the “Mavi Marmara”, reaching Gaza with three ambulances packed with badly needed medicine, as the Israeli siege also deprived the Strip of hospital equipment and urgently needed medicine. Coordinating all of this was not a simple task as it also needed to be streamlined with the global efforts for the convoy, which included the dispatching of 140 other ambulances and 300 activists arriving from 30 countries.

“There were many moving scenes as Palestinians learned how far we had come from to offer solidarity,” Fowler told me. “Their Israel overlords had told the Palestinians for years that nobody cared about them, which is a big line.”

I also spoke with Mike Treen upon his return from his Gaza sea journey. Treen is a seasoned activist who works daily at defending the rights of workers from across the country. He sees his struggle for workers’ rights in New Zealand as part and parcel of his global solidarity outlook as well.

“In my role as part of the union movement in this country, I was also able to explain (to New Zealanders) that innocent working people (in Gaza) are the victims of this siege and that Israel has driven unemployment to over 50 percent for working people — one of the highest rates in the world,” he told me.

Treen, just like Fowler, understands that the boat solidarity is not merely an issue of providing urgently needed supplies, but as a well-coordinated effort at exposing the evils of the Israeli blockade.

“Unless Israel is directly bombing Gaza, the siege and its hideous human implications simply drop off the radar of public consciousness,” he said.

And this is precisely the real mission of the Gaza flotillas: While Israel wants to normalize the Gaza siege as it is currently normalizing its occupation and Apartheid regimes, the solidarity movement has created a counter discourse that constantly foils Israeli plans.

In other words, whether the boats arrive on the Gaza coast or are hijacked by the Israeli navy, it makes little difference.

The power and effectiveness of this kind of solidarity goes even beyond Gaza and Palestine.

“Our involvement in international solidarity endeavors such as the Freedom Flotillas has, in turn, sparked a resurgence in other important elements of building the strength of the world-wide movement for justice,” Fowler told me, soon after Treen’s return to New Zealand.

Mike Treen also has his work cut out for him as he is now busy engaging the media and various communities in his own country, sharing his experiences on the boat, which led to his arrest, beating, tasering and deportation.

And like the horrific Apartheid regime in South Africa, the Israeli Apartheid will collapse, too, because Palestinians continue to resist and because millions of people, like Mike and Roger, are standing by their side.