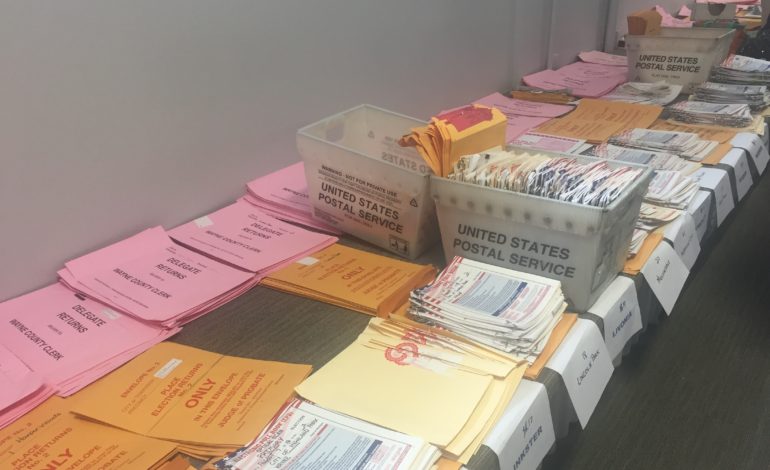 DETROIT – More than 40 voters, elected officials and candidates crowded into a small room inside the Renalti Building on Monday, Aug. 13, to demand answers to the problems experienced by Wayne County voters during the August 7 primary election.

The Wayne County Board of Canvassers convened a meeting to discuss the problems experienced by Wayne County voters on election day. At least 14 polling places in Metro Detroit during the primary elections experienced power outages while others ran out of ballots.

The power outages were explained by storm damage the night before the election.

“Right now our main focus is on getting crew assigned to work on restoring remaining polling places for the vote today,” DTE Executive Director Ryan Stowe said on Election Day. “We came on this morning with about 14 sites still without power; we’ve been able to restore five sites so far. So, we’re doing everything we can working with local communities to… get our crews out there and get it restored.”

The complaints at the meeting included last minute changes at voting stations, power outages and the results of the race being incorrectly displayed on the ElectionSource website. ElectionSource is the company that provides the voting equipment for Wayne County elections, as well others around the country.

Jeff DeLongchamp, the owner, president and CEO of ElectionSource, was present at the board meeting to answer for some of the problems.

“Our site actually has no connection to the actual voting process,” DeLongchamp said. “This is a display website.”

DeLongchamp said that his company’s website displays unofficial results in a similar way to what news agencies do on Election Night. The problem occurred when the site experienced an unprecedented amount of data that DeLongchamp described as “a record breaking amount of data.”

DeLongchamp said that the turnout was “10 times” what ElectionSource anticipated it would be for the primary election. While ElectionSource’s website attempted to report the abnormally high number of votes, a glitch occurred that displayed incorrect information.

“Our system and our website have no ability to change or to count additional results, at all,” DeLongchamp said. “The system was vetted and we have found the error and we were able to correct it.”

DeLongchamp said the company was completely at fault for the display errors and assured the voters it would not happen again.

Other problems were also brought up during the public comments portion of the meeting.

“We’ve all been contacted by voters who dealt with more than the ElectionSource issue,” said State Rep. Sherry Gay-Dagnogo (D-Detroit). “People were directed to go to a different poll without any notification. When you look at the power outage, you look at the glitches, you look at those inflated numbers, I think this is an opportunity to educate our constituents about the difference between the Wayne County clerk and the city clerk. We have a responsibility to do that because we have been contacted by our constituents and to be quiet about that would be an issue.”

The Michigan Secretary of State’s office recognized one of the problems the night of the election and sent out a tweet addressing the issue.

“Polls close at 8 p.m. All voters in line by 8 p.m. will be able to vote and should not leave the polling place,” the tweet read. “Some precincts have reported running low on ballots. Voters can’t be turned away due to lack of ballots. Clerks will provide more ballots to precincts as needed.”

“Something went wrong election night,” Ware said. “There is a big concern for what has happened. We don’t have people that believe in the voting system. We have people calling us and now they’re wondering if their vote counts.”

In a letter from the House Detroit Caucus to the Michigan Board of State Canvassers, the Caucus demanded an audit into the results of the primary election. Gay-Dagnogo released the contents of the letter.

“I call upon you in your official capacity to immediately begin an audit of the August 2018 primary election results across our state, using representative random sampling, to ensure that voting efficacy and confidence is preserved,” part of the letter reads. “The audit process should be transparent and comprehensive, designed in consultation with independent election experts, and the final report should be released to the public.

The Wayne County Board of Canvassers have until August 21 to certify the County’s primary election results.