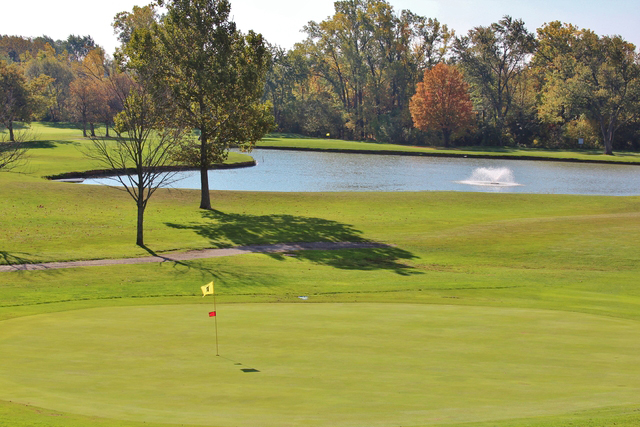 DEARBORN HEIGHTS  – The city is moving forward with the purchase of the Warren Valley Golf Course from Wayne County, despite objections from a newly elected City Council member who claimed the city’s financial condition doesn’t allow for its upkeep. While many residents want to keep the course, they and Councilman Bill Bazzi demanded answers from the mayor about how the city would sustain the course and balance the city’s budget.

The City Council voted unanimously on June 13, 2017 following months of heated deliberations between residents and city and county officials, to purchase from Wayne County the 36-hole golf course, built by world-renowned Scottish architect Donald Ross in 1922.

“Detroit went bankrupt because of the long-term debt, in large part caused by the unfunded liabilities and pensions. Nowhere in the [financial] statement does it appear that Dearborn Heights has the funds to spare to the golf course.” – Councilman Bill Bazzi

With an outpouring of support by residents who consider the property a “national landmark”, the city bought the 250-acre floodplain on the Rouge River for $1.8 million. Otherwise, it would’ve been sold to real estate developer Dela Management, which planned to turn the property into a subdivision of 200 luxury homes. Dearborn Heights City Council members debate the purchase of the golf course in an open meeting, August 14 – Photo by The AANews

City and school officials cited environmental, infrastructure and financial burdens. They were worried the development would put homes at risk of flooding due to the structure of its nature-constructed retention ponds, lower property values, overcrowd a school district already near capacity and overwhelm residents on water bills.

However, at an August 14 City Council meeting, Councilman Bazzi proposed a resolution for the city to reconsider the purchase, citing a city budget too thin to support the purchase and maintenance of the golf course and its banquet center. He stressed that he doesn’t support the development project and that the city has control over zoning and could limit its potential use.

Bazzi pressed Mayor Dan Paletko on how he intends to address the city’s budget deficit, asked for assurances that the course won’t later be sold and if there was a business plan for the course.

“It is our duty as members of the City Council to ensure the stability and financial security of our city,” Bazzi said.

In analyzing “alarming” city audit reports dating back to 2012, Bazzi said he found that the city is unable to pay about $207 million in benefits, liabilities and employee pensions, with about a $3.7 million surplus.

“The city of Detroit went bankrupt because of the long-term debt, in large part caused by the unfunded liabilities and pensions,” he cautioned. “Nowhere in the [financial] statement does it appear that the city of Dearborn Heights has the funds to spare to the golf course.”

He added that it would take an additional $1 million to bring the golf course on par with state regulations and that it takes about $40,000 a month just to cut grass city-wide, a service the city can’t afford on its own and has had to contract out.

“If we can barely afford to cut our grass throughout the city, how are we going to afford cut grass at the golf course,” he added, estimating the monthly cost to be about $50,000.

The city also can’t afford to keep the City Hall open on Friday or “maintain sub-par parks” due to lack of funds, he said.

Having less cash on hand would also mean that the city would be able to borrow less money at a higher interest rate in the future and could force the city to raise water rates – again.

Bazzi told The AANews that although he knew it wouldn’t pass, he introduced the resolution to highlight the city’s lack of transparency regarding finances.

He raised questions regarding non-city related items found on the city’s check registry, which the mayor vehemently denies.

“The previous company that managed the golf course could not sustain the continuous losses and ultimately opted out of renewing their contract,” Bazzi said at the council meeting.

A riled Paletko, who touted that he’s a certified public accountant, rejected Bazzi’s allegations and said he’s, “not a financial genius.”

In a letter distributed to residents, Paletko said Bazzi “misled the public” and spread “lies!”

The mayor outlined a budget surplus of about $10 million accumulated from the last five fiscal years and said a $1.8 million purchase won’t break the bank. He added that the city liability and pension plans are above the 80 percent funding required by the state, at 87.5 percent for police and fire department retirees and 81.3 percent for general government employees. Most neighboring cities are at about 60 percent funding.

For healthcare or post-employment benefits, the mayor explained that until a recent decision by the Government Accounting Standard Board, nearly all governments, including Dearborn Heights’, followed a “pay-as-you-go” plan. The state is asking all cities to plan to save 40 percent of funds for such liabilities by 2048.

“Dearborn Heights has been fiscally sound and I believe we will come up with a plan for healthcare that will exceed the 40 percent in 30 years,” Paletko wrote.

Councilman Dave Abdullah said he was in favor of the city purchasing property and keeping it as a golf course, because retracting the purchase would ensure the city would lose control of its destiny.

He pointed out that a $1.8 million sale price is a “steal” for 250 acres and that it would be “absolutely nuts” for the city not to move forward with the opportunity. He also doesn’t think it would need $1 million to bring it up to code.

“We will do everything within our power to keep it as a viability running golf course, which will raise our values and protect our basements,” he said.

Councilwoman Lisa Hicks Clayton, who called the golf course a “gem”, said she’s worried about the legal ramifications of canceling the purchasing agreement.

“I am pleased that the Council is against canceling the purchase of the golf course. However, I believe that there are many important financial issues brought forth by Councilman Bazzi’s request.” – Resident Lisa Oshanski

Most residents who shared their opinions voiced strong support for purchasing the land and keeping it as a golf course, but raised concerns about keeping any development off the course and about contractor accountability to help mitigate the financial decline. Bazzi and some attendees asked the Council to pass ordinances ensuring the property would remain zoned for recreational use only. However, Paletko and Abdullah said ordinances could be easily rescinded and placing conditions before a final sale could delay the purchasing process.

The purchase could be made final in two weeks, as the golf course awaits a liquor license to be renewed, according to Paletko.

Bazzi also echoed the Public Works Department’s concerns that the city has been hiring contractors who have personal ties with city officials.

“I am pleased […] that the Council in general is against canceling the purchase of the golf course,” resident Lisa Oshanski said. “However, I believe that there are many important financial issues brought forth by Councilman Bazzi’s request, and that includes a diligence that we need on all costs.”

She suggested that the city’s financial stability could be improved by revisions that include hiring temporary seasonal workers to cut grass, instead of vendors who bill the city for an amount just under what’s needed for the Council to approve.

Resident Nada Saab told the council that in July, heavy rain caused sewage backup that resulted in her basement flooding with up to five inches of sewer water. It was the second incident in five years and cost her family up to $15,000 in fixes.

She blamed the city for neglecting the maintenance of the sewer system and said she was concerned that building on the golf course would escalate the flooding issues.

“We cannot afford these losses every few years,” She said. “We are concerned about our health and the value of our houses.”

Councilman Ray Muscat stressed the need for better quality control and higher standards from contractors, like not damaging driveways while making road repairs.

“We can’t keep throwing good money at a bad job,” he said.

In the end, the Council – including Bazzi – voted in favor of moving forward with purchasing the golf course.