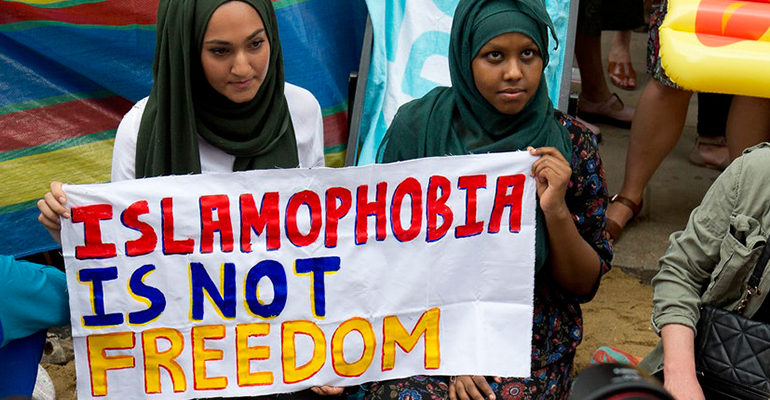 Donald Trump’s travel ban is wreaking havoc on Muslim families, forcing some Americans to leave the U.S. for countries in the midst of devastating wars.

Donald Trump’s travel ban, recently upheld by the Supreme Court, is wreaking havoc on Muslim families, forcing some Americans to leave the United States for countries in the midst of devastating wars in order to reunite with loved ones. The resilience ― and, among some Americans, popularity ― of the travel ban is emblematic of how enshrined Islamophobia has become in American culture. Even our highest court of justice has endorsed a discriminatory law rooted in misconceptions about the instability, oppression and violence of the Middle East and the Islamic faith.

While many people blame these persistent misconceptions on mass-media depictions of Arabs and Muslims, that’s not where they begin. We need to examine the pervasiveness of anti-Arab and anti-Muslim information in the American education system ― and, in particular, in textbooks.

Most Americans’ exposure to the Middle East and Islam starts with what they learn in high school history class. World history textbooks in the United States only allocate around 3 percent of space to discussions of these topics. And the story those textbooks tell in that limited space is a disturbing one. My research on world history textbooks used across the country finds that sections about Islam and the Middle East advance a “rise and fall” narrative. That story goes like this: In the medieval period, the Middle East was a flourishing and advanced civilization, but due to an inability to modernize, the region has subsequently declined into chaos, oppression and violence. This sensationalized version of history reduces the region to a bygone society and fails to account for the vibrant and dynamic contemporary reality of the Middle East. American history textbooks similarly tend to degrade Arabs and Muslims by situating them as foreign and antithetical to the American national narrative. While Arabs and Muslims have been integral members of the United States since before the country’s inception, American history textbooks strip U.S. history of its Arab and Muslim influences. These textbooks fail to acknowledge the significant contributions of Arab and Muslim Americans to all aspects of American life, from sports to technology to government. Students don’t learn that there would be no Apple iPhones or Macbooks without the genius and innovation of an Arab American, Steve Jobs. Students aren’t taught that Muhammad Ali was motivated by his Muslim faith to dedicate his life to social justice and civil rights.

In failing to tell this part of the American story, these educational materials construct a national identity that alienates Arab and Muslim Americans. Instead, both world history and U.S. history textbooks portray Arabs and Muslims as the undemocratic and tyrannical people that the United States strives to defeat in order to secure democracy and peace throughout the world. They tell stories about “[t]he ever-volatile Middle Eastern pot” that “continued to boil ominously”, describing Iranian hostage takers as “a howling mob of rabidly anti-American Muslim militants.” This framing leads students to view the Middle East as a tempestuous, threatening and mysterious region in a constant state of turbulence.

This is not to say that there is not real violence in the Middle East and that students need to learn about it. However, they must be taught the whole truth: The full story of how colonial powers split the region along largely arbitrary borders, the full account of many women’s agency and strength and the full appreciation of the expansive breadth of rich cultures, languages and religions in the region.

These textbook portrayals of Arabs and Muslims are not neutral, apolitical truths. Rather, the decisions about what information to include — and what to omit — are part of larger debates over what students should learn about themselves and others. As a for-profit industry, textbook production is bound to economic and political forces that influence the content and distribution of every textbook. The best way for publishers to increase their profits is by tailoring their textbooks to appeal to large markets like Texas, where a state committee approves a list of textbooks from which school districts can choose. Nineteen states, mostly concentrated in the South and West, use this statewide textbook adoption system. Although the textbook selection committee is only mandated to evaluate textbooks for factual correctness and compliance with the state’s social studies standards, in reality the committee assesses how closely the narratives put forth in the textbooks conform to its members’ ideological and religious values. A photo of a 2014 world history textbook.

In Texas, the Christian right has managed to amass considerable influence in the textbook adoption process through political appointments and elections to the textbook selection committee. Because textbook publishers wish to secure spots on Texas’ statewide list of approved textbooks, publishers tailor their textbook content to align with the views of these powerful Christian stakeholders, many of whom see Arabs and Muslims as incompatible with American values.

High school textbooks are an important mechanism for forming young students’ attitudes about the world and the lessons they’re learning about Arabs and Muslims are inaccurate and intolerant. These messages come with the clout and authority of a textbook, which most young people consider to be neutral and objective. While these sources are in fact not neutral or apolitical, there is enormous power in them being presented and perceived as such. For Arab and Muslim American students, using textbooks that portray them and people like them as violent and inherently un-American can have a negative effect on how they view themselves and their own communities.

These messages come with the clout and authority of a textbook, which most young people consider to be neutral and objective.

And then there’s the extra-curricular effects of teaching young people a false narrative about Arabs and Muslims. Hate crimes committed against Arabs and Muslims in the United States have reached an all-time high. In 2016, the number of anti-Muslim assaults surpassed post-9/11 levels. Attacks against Arabs increased by more than 200 percent in 2015. Since 2001, Arabs and Muslims in the United States have become scapegoats for the inexcusable actions of a minority of extremists who justify their attacks using the name of Islam. The persistence of anti-Arab and anti-Muslim bigotry and violent backlash since 9/11 prompts the question: How have these negative attitudes become so entrenched in American public discourse? The prevalence of anti-Muslim and anti-Arab information in educational material may certainly be a factor.

We have the opportunity to reshape that narrative, however. Because the textbook production and adoption processes are pervious to political pressure, organized local and national efforts demanding more accurate and positive representations of Arabs and Muslims may bring about much-needed change in textbooks. If you’re a parent, read your child’s textbooks. You should know what they’re learning and what, in some cases, you’re paying for. Call your state’s Board or Department of Education, which is often responsible for selecting textbooks, and express any concerns you have about your child’s textbook. Attend textbook adoption hearings and even consider applying to serve on your state’s textbook adoption committee. Write to textbook publishers explaining your observations about textbook content.

If we want to begin to combat Islamophobia and xenophobia, we must start with the source: Our children’s education. American students deserve to know the dynamic and nuanced history of a region and a faith that have been misrepresented for too long. If they don’t, the travel ban will only just the beginning of the ruinous consequences of Islamophobia on our country.