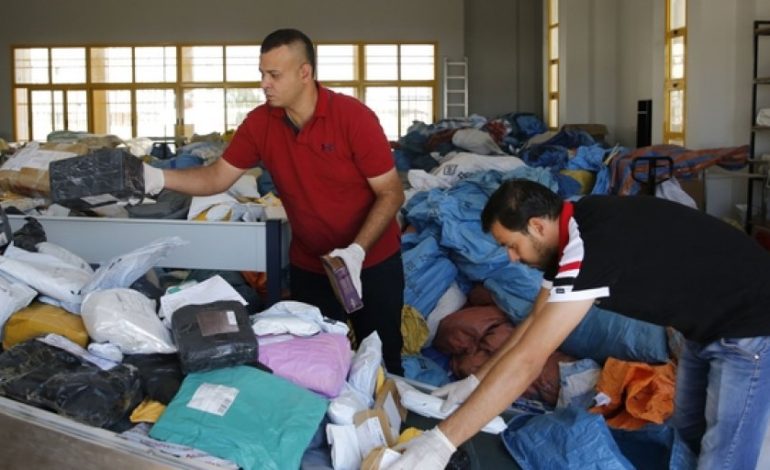 Palestinian postal workers sift through eight years worth of undelivered mail held by Israel, at the post office in the West Bank city of Jericho - AP

It is almost comical that recently Israel finally decided to release more than 10 tons of mail that it has prevented from reaching Palestinians in the West Bank, much of which was sent eight years ago. Not eight weeks or months, but years. In the U.S., many people become irritated when their Amazon packages arrive late on the third day, instead of within the two days promised.

The “Coordinator of Government Activities in the Territories”, a branch of the Israeli occupation forces that manages civilian affairs in the occupied Palestinian territories, said that this belated delivery of mail that includes letters, gifts, medicines and even a wheelchair, was a one-time “confidence-building”, “goodwill measure.” How kind and generous for them to do so.

This is yet another illustration of the astronomical degree to which Israel maintains domination over all aspects of Palestinian life, whether in the West Bank, Gaza, Jerusalem or within Israel itself. Unfortunately, the inability to receive mail is among the more trivial outcomes of Israeli occupation and oppression of Palestinians. On a daily basis, they must endure countless forms of repression that not only damage their quality of life, but also violate their most fundamental human rights and freedoms.

Obviously, humans need water and food to survive and thrive and Israel’s subjugation of Palestinians occurs even at this most basic level. Not only does it maintain vast control of these resources to enrich itself, but also to prevent Palestinians from thriving. A Palestinian population that struggles to survive, let alone prosper, cannot effectively challenge the occupation.

It is therefore no surprise that Israel consumes 86 percent of the water resources in the West Bank. The average Palestinian water consumption for domestic, commercial and industrial use in the West Bank in 2014 was 79 liters per person per day, while the Israeli average was 287 liters. The World Health Organization (WHO) recommends at least 100 liters per day, and that is only for domestic use.

Despite this massive inequality and the abundance of water that it enjoys, Israel shamefully double-dips into Palestinian resources: Palestinians in the West Bank are forced to buy back their own water from Israel to meet their needs. In Gaza, the situation is even worse. At least 96 percent of water there is undrinkable and much of this crisis is due to Israeli assaults, which have destroyed water production and wastewater treatment infrastructure, and the Israeli blockade, which prevents the importation of materials and other items needed to develop such infrastructure. As a result, Palestinians in Gaza are forced to rely on private suppliers who desalinize or decontaminate water, but this costs six times as much as regular water.

It is also no coincidence that “Area C” in the West Bank, the designated area where Israel maintains full control of security and land management, contains the majority of land that is suitable for agriculture and farming. In fact, access to Area C would add at least $700 million in value to the Palestinian economy, which is about 7 percent of the Gross Domestic Product (GDP). As is the case with water, Israel also double-dips with agriculture: In some situations Palestinians have no choice but to buy Israeli produce grown on their own stolen land.

In Gaza, about 35 percent of agricultural land lies within the militarized border buffer zone that Israel has imposed and is inaccessible to Palestinians, so many farmers find it very difficult to make a living. As part of its siege on Gaza, Israel also has previously banned or continues to ban the entry of numerous food items into Gaza, including cows, goats, chickens, fresh meat, nuts, potato chips, dried fruit and others.

Israel also restricts the freedom of movement of Palestinians, particularly those living in Gaza. Due to the total Israeli siege, almost two million Palestinians in Gaza are confined to about 140 square miles, unable to travel to the rest of the occupied Palestinian territories, let alone the rest of the world. Tragically, even those who are in desperate need for medical treatment unavailable in Gaza are often denied permission to travel elsewhere for care (last year, Israel approved a record-low percentage of medical travel permits – 54 percent). Many of these people have died as a result.

In the West Bank, Israel maintains full control over all entry and exit points, and Palestinians cannot go in or out without Israeli permission. Within the West Bank, travel is also restricted. As of January 2017, there were at least 98 permanent checkpoints; and according to the U.N., there was an average of 327 flying checkpoints (temporary, random checkpoints) per month for nine months in 2017, in flagrant violation of international law concerning the freedom of movement. As a result, travel between different points in the West Bank can take 10 times longer than normal. As with Gaza, medical patients in the West Bank have died as a result of these restrictions; in just one example in 2015, a 65 year-old Palestinian women with respiratory problems died due to road closures that prevented her from reaching a hospital in time.

Even the Palestinian citizens of Israel face similar restrictions. Despite being Israeli citizens, these Palestinians are barred from living in 68 percent of Israeli towns due to so-called “admissions committees”, which allow residents of small towns to prevent individuals “who do not suit the lifestyle and social fabric of the community” from residing in these towns. In other words, towns can discriminate against Palestinians and engage in a legal form of racial segregation.

The denial of the human rights to water, food, freedom of movement and healthcare are only some of the ways in which Israel has deprived Palestinians of their dignity and exercised total control over their lives, but they are some of the most consequential. From restricting their freedom to protest or fly the Palestinian flag, to home demolitions, land confiscation and even limiting their access to decent Internet and telecommunications, the list goes on and on.
One would be hard-pressed to find any other state in the world that engages in such tyrannical behavior against people under its control, especially for as long as it has – 70 years and counting. Israeli propaganda has been effective in portraying itself as a democratic and pluralistic state that respects human rights, but the few examples above prove that this is far from the truth. The reality of Israeli crimes must be exposed to the world and Israel must be held accountable. Otherwise, it will continue to operate with impunity as an apartheid state.