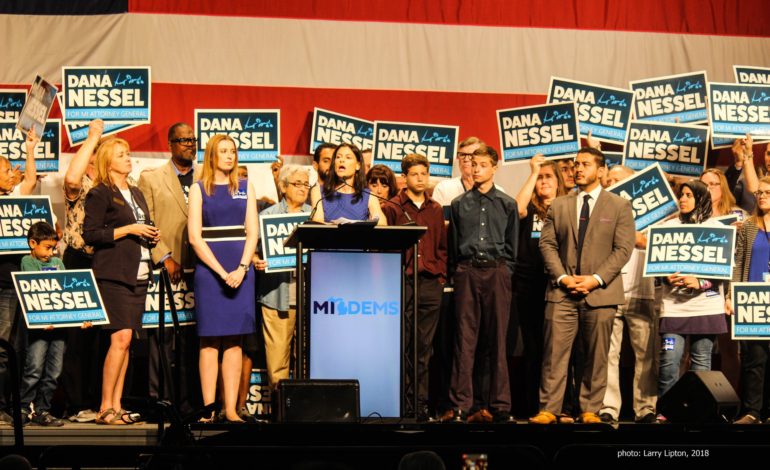 LANSING – Michigan voters are gearing up to elect candidates for governor, attorney general and secretary of state, among others, on November 6.

Following the primary elections, which saw the defeat of progressive candidate Abdul El-Sayed to his rival and establishment Democrat, Gretchen Whitmer, elected officials and Arab Americans are urging Democratic-leaning voters to unite in backing Whitmer and to build the “blue wave” they hope will wash away a conservative majority in Lansing.

However, many wondered if the largely progressive Arab American community would come out to the polls to vote for Whitmer, as they did for El-Sayed.

Party members made their nomination ticket official at the Michigan Democratic Nomination Convention in Lansing on August 25 and 26, officially nominating Whitmer for governor, Garlin Gilchrist II to be her running mate, Dana Nessel for attorney general and Jocelyn Benson for secretary of state. Democrats also chose Megan Cavanagh and Samuel Bagenstos for Michigan Supreme Court and nominated candidates for state-wide university board of trustee positions.

An endorsement nomination convention took place in April, but over the weekend the party threw its official support behind candidates to appear on the November ballot. At the well-attended convention, candidates and officials cautioned against a repeat of the 2016 presidential election, partly blaming party division for President Trump’s victory.

This time around, the focus was on unifying the Democratic vote surrounding issues facing working class and poor families, as well as defeating Republican gubernatorial candidate Bill Schuette.

Trump has been outspoken in endorsing Schuette, tweeting last September that the state’s current attorney general “will be a fantastic governor.”

El-Sayed, who earned 30 percent of the vote (340,560) in the primaries and whose race brought an unprecedented number of Arab Americans to the polls, issued a strong endorsement of Whitmer.

“We have a responsibility to make sure that the likes of Bill Schuette never sees the inside of the governor’s office,” he said. “Let’s make sure that Gretchen and Garlin get elected.”

The former head of the Detroit Health Department immediately set the tone for party unity in his concession speech on election night.

At the same time, some officials warned against being presumptuous about an easy Democratic victory.

“I want a blue wave, but that blue wave isn’t going to happen if we keep talking about it,” U.S. Rep. Debbie Dingell (D-Dearborn) told the audience. “It’s going to happen when we take nothing for granted and roll up our sleeves.”

“We can’t win just by running against Donald Trump and Bill Schuette,” Kildee said. “We saw what happened two years ago. I’ll tell you, my friends, I don’t know about you, but I’m just exhausted by noble defeat.” State Rep. Abdullah Hammoud (D-Dearborn), who rallied Arab Americans at the convention behind Whitmer, told The AANews candidates are paying more attention to the Arab American communities because of their increasing political maturity and strength, pertaining to their ability to garner resources and unify votes.

“We can no longer have an anti-Republican agenda,” Hammoud said. “Whether its Stacey Abrams or Abdul El-Sayed, people are attracted to ideals like a $15 an hour minimum wage or being environmentally conscious.”

Abrams, a former State House leader, won her Democratic primary in Georgia in May, becoming the first Black woman to receive a nomination for governor from a major party.

Hammoud added that while Democratic leaders are often the first ones to propose a compromise with Republicans, he said it’s no longer sufficient that Democrats “play defense.”

Still, Hammoud said Democrats have a “good shot” at flipping the state House blue, especially given that more Democrats showed up at the polls in the primaries than Republicans.

About 53 percent of Michigan voters chose Democratic candidate and 46.5 percent voted for Republicans.

In Dearborn, El-Sayed received 63.6 percent of the vote. In the city’s east and Southend precincts, where a high concentration of Arab Americans reside, about 29.8 percent of registered voters came out to the polls, voting heavily Democratic and for El-Sayed.

“The blue wave is not a given,” Hammoud said. “But it is being created.” Sam Baydoun, a Dearborn-based realtor who won the Democratic primary for a Wayne County Commission seat, told The AANews more candidates are visiting the Arab and Yemeni American caucuses due to their elevated leverage in swaying election results.

“Abdul El-Sayed’s involvement in the campaign brought to the spotlight the effectiveness of the Arab American vote,” he said. “His performance really put us on the political map in Michigan.”

Baydoun said that although many Arab Americans who supported Bernie Sanders’ campaign and contributed to his 2016 primary victory in Michigan did not vote for Hillary Clinton in large numbers in the general election, he believes Trump’s victory is enough for them to learn from their mistakes.

“Because of the extreme measures the Trump administration has tried to institute, including his immigration stance, it has really energized a lot of people and compelled them to vote Democrat because of policies,” he said.

Aman Fidama, a Yemeni American voter, said although Arab Americans came out to the polls in large numbers due to El-Sayed’s race, most “understand the consequences” of having Schuette – with attached strings leading to Trump – in the governor’s seat.

Fidama said she and many Democrats will be voting for Whitmer, not only because she’s “a safe bet” but also based on her political experience and message of inclusivity when talking about issues concerning Michigan, like shutting down the Embridge Line 5 oil pipeline in the Straits of Mackinac and bringing justice to Flint.

“This election is bigger than any one of us, it’s about all of us,” Whitmer told the convention crowd. “We are the ones that can do this.”

Ali Baleed Almaklani, president of the Yemeni American Benevolent Association, told The AANews that candidates from across Michigan’s 14 Congressional districts visited the Arab and Yemeni American caucuses, whose members, especially youth, were more engaged than ever following the primary election.

“[Candidates] pay attention to you when they see that your community votes,” Almaklani said, adding that he believes Arab Americans will stand behind Whitmer in November.

The caucuses are now focused on registering as many voters as possible before the October 9 deadline.

“We can’t just complain,” he said. “We broke a record in the primary and hope well do it again in November.”

He added that the rub is hoping the candidates won’t turn their backs on the immigrant community and ignore phone calls if elected.