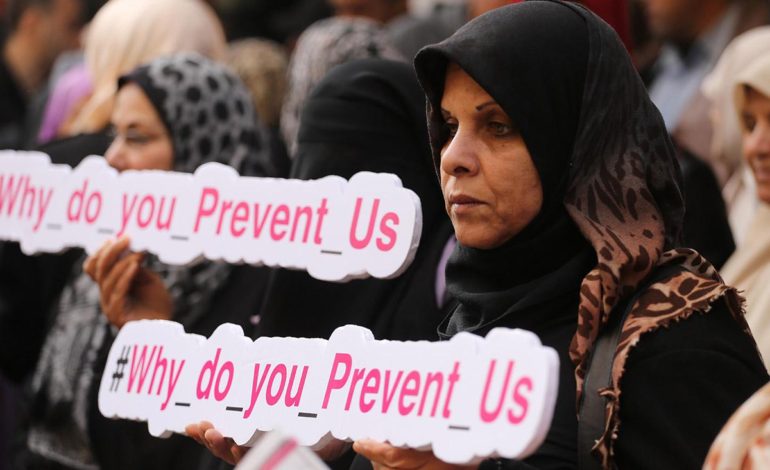 Hanan al-Khoudari, a Gaza resident, resorted to Facebook in a cry for help when Israeli authorities rejected her request to accompany her 3-year-old son, Louay, to his chemotherapy treatment in East Jerusalem.

The boy is suffering from an “aggressive soft tissue sarcoma.” Israeli authorities then justified their decision based on a vague claim that one of Hannan’s relatives is a “Hamas operative.”

The rights group Gisha reported that the state remains unwilling to define precisely what it means to be a “Hamas operative.” Even if an explanation is offered, denying gravely ill Palestinians from receiving life-saving treatment remains an immoral and illegal act.

“The state is sentencing the petitioners to death or a lifetime of suffering,” said Muna Haddad, an advocate with Gisha. By “petitioners”, she was referring to seven Gaza women who were denied access to urgent medical treatment by Israel, which required them to leave the besieged Gaza Strip.

The suffering of Gaza women rarely makes headlines. When Palestinian women are not invisible in Western media coverage, they are seen as hapless victims of circumstances beyond their control.

The fact that a woman from Gaza is “sentenced to death” simply because a male relative is shunned by Israel is quite typical behavior from a country that oddly presents itself internationally as an oasis for equality and women rights.

In truth, Palestinian women are hardly bystanders in the collective victimization. They deserve to be made visible and understood within the larger context of the Israeli occupation of Palestine.

The seven women who petitioned the Israeli court, and the story of Hanan al-Khoudari, are but a small representation of thousands of women who are suffering in Gaza without legal advocates or media coverage.

I spoke to several of these women — whose suffering is only matched by their incredible resilience — who deserve more than mere recognition, but an urgent remedy as well.

Shaima Tayseer Ibrahim, 19, from the town of Rafah in southern Gaza, can hardly speak. Her brain tumor has affected her mobility and her ability to express herself. Yet, she is determined to pursue her degree in Basic Education at Al-Quds Open University in Rafah, in the southern Gaza Strip.

The pain that this 19-year-old is enduring is extraordinary even by the standards of poor, isolated Gaza. She is the oldest of five children in a family that fell into poverty following the Israeli siege. Her father is retired and the family has been struggling but, nevertheless, Shaima has been determined to get an education.

She was engaged to be married after her graduation from university. Hope still has a way of making it into the hearts of the Palestinians of Gaza and Shaima was hoping for a brighter future for herself and her family.

But March 12 changed all of that.

On that day, Shaima was diagnosed with an aggressive brain cancer. Just before her first surgery at Al-Makassed Hospital in Jerusalem on April 4, her fiancé broke off the engagement.

The surgery left Shaima with partial paralysis. She speaks and moves with great difficulty. But there was more bad news; further tests in a Gaza hospital showed that the tumor was not fully removed and it must be quickly extracted before it spreads any further.

To make matters worse, on August 12, the Ministry of Health in Gaza announced that it would no longer be able to treat cancer patients in the Israel-besieged enclave.

Shaima is now fighting for her life as she awaits Israeli permission to cross the Beit Hanoun checkpoint (called the Erez Crossing by Israel) to the West Bank, through Israel, for an urgent surgery.

Many Gazans have perished that way, waiting for pieces of paper, a permission, that never materialized. Shaima, however, remains hopeful, while her whole family constantly prays that their eldest daughter prevails in her fight against cancer and resumes her pursuit of a university degree.

On the other side of Gaza, Dwlat Fawzi Younis, 33, from Beit Hanoun is living a similar experience. Dwlat, however also looks after a family of 11, including her nephews and her gravely ill father.

She had to become the main breadwinner of her family when her father, 55, suffered kidney failure and was unable to work.

She would look after the entire family with the money she earned as a hairdresser. Her brothers and sisters are all unemployed. She used to help them, too, whenever she could.

Dwlat is a strong person; she has always been that way. Perhaps it was her experience on November 3, 2006, that strengthened her resolve. An Israeli soldier shot her while she was protesting with a group of women against the Israeli attack and destruction of the historic Umm Al-Nasr mosque in Beit Hanoun. Two women were killed that day. Dwlat was hit by a bullet in her pelvis, but she survived.

After months of treatment, she recovered and resumed her daily struggle. She also never missed a chance to raise her voice in solidarity with her people at protests.

On May 14, when the United States officially transferred its embassy from Tel Aviv to Jerusalem, 60 Palestinian protesters were killed and nearly 3,000 were wounded at the Gaza-Israel fence. Dwlat was shot in her right thigh, the bullet penetrating the bone and cutting through the artery.

Her health has deteriorated quickly since then and she is now unable to work. But Israel still has not approved her application to be transferred to Al-Makassed Hospital in Jerusalem to receive treatment.

Yet, Dwlat insists she will continue to be an active and empowered member of the Gaza community, even if it means joining the protests along the Gaza fence on crutches.

In truth, these women embody the remarkable spirit and courage of every Palestinian woman living under Israeli occupation and siege in the West Bank and Gaza.

They endure and persist, despite the massive price they pay, and continue the struggle of generations of courageous Palestinian women who came before them.