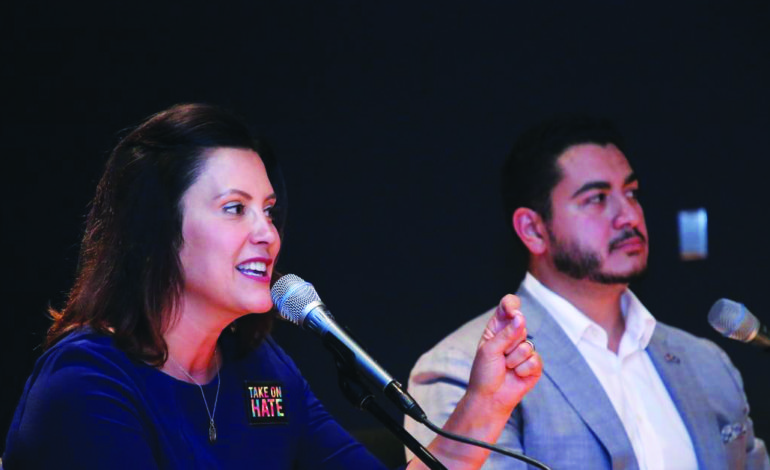 DEARBORN — At a town hall meeting on Monday Aug. 27 at the Arab American National Museum (AANM) in Dearborn, Democratic gubernatorial nominee Gretchen Whitmer and her running mate, Garlin Gilchrist, joined forces with Abdul El-Sayed, the runner-up for the nomination, to speak with Arab Americans and Metro Detroit community members.

The capacity crowd in the museum’s downstairs auditorium applauded the three as they took the stage.

“He was the first one to call Gretchen [Whitmer] and jump on board to give his support,” Michigan State University Trustee Brian Mosallam said when he introduced El-Sayed.

Before introducing Whitmer, El-Sayed recounted his college graduation in 2007, where he received his first recommendation to run for office from Bill Clinton. He said the former president encouraged him to run for office, citing El-Sayed’s “gift for communicating.”

He also told them, “Because of the work that you did, the effort that you put in and the turn out this community showed, we earned more votes than the winner of any other primary election in the last 40 years.” El-Sayed thanked the Dearborn community for its support of himself, a Muslim American, in the primary and encouraged voters to work to bring Whitmer to victory in the Nov. 6 general election.

El-Sayed said that at his concession he told the crowd, “Don’t you dare Abdul-or-bust me”, referring to the 2016 movement of Bernie Sanders supporters who used the slogan “Bernie or Bust” and refused to vote for Hillary Clinton in the presidential election.

He assured the crowd that Whitmer and Gilchrist stand for the same issues he’s committed to and said when it comes to who he’s going to vote for in the November election, the choice is obvious.

The crowd broke into laughter.

“No, I’m serious,” he continued. “The fact of the matter is we don’t have a choice in 2018, because the choice for us is about whether or not we are willing to do exactly what we did in this primary: To stand up and force them all to hear our voices or to stay home and allow them to make decisions on top of us.”

Whitmer said she was grateful for a united front after the primaries.

“One of the things that [El-Sayed] and I talked about,” she said, “even when we were having some of those debates, was that the things that unite us are a heck of a lot more powerful and important than anything that we disagreed about in the primary.

“No matter who it was that brought you out to that primary,” she added, “we all have a lot to do yet because the job is not done. And we don’t quit until the job is done.”

Whitmer said though she’s proud to be a Michigander, she’s also disappointed in the opportunities available for Michigan families today versus what existed in the past, saying people from around the world used to come to Michigan for good jobs with enough pay for people to retire, to be able to travel roads safely with affordable insurance and have quality public education and clean water. “Today’s families deserve no less than that Michigan,” she said, “but we are dangerously behind on all fronts because our leaders have not made the investments that make this the place that kids stay and our families can get ahead. That is going to change.”

Whitmer introduced Gilchrist as her running mate, whom she said is a man of “high integrity” and is someone she thinks will work hard for the state of Michigan.

“We have a lot of work to do,”Gilchrist said, “and that means we have to muster the energy to do it.”

He said his energy comes from being the product of people who had a “generational dream” to solve problems for “people tomorrow.”

Gilchrist told the crowd he doesn’t gamble, because he likes to “stack the odds.”

“The way we stack the odds in elections is by making sure our allies mobilize to the maximum,” he said. “If we all take the responsibility to step up and to commit to having conversations with every person we’re connected to, those odds will be in our favor in November. We cannot afford for future generations of Michiganders from every community and from all walks of life to have toss-up odds.”

He said after the record-breaking turnout in the primaries, he expects to see the same during the Nov. 6 election.

“It’s time for us to have generational turnout in November,” he said.