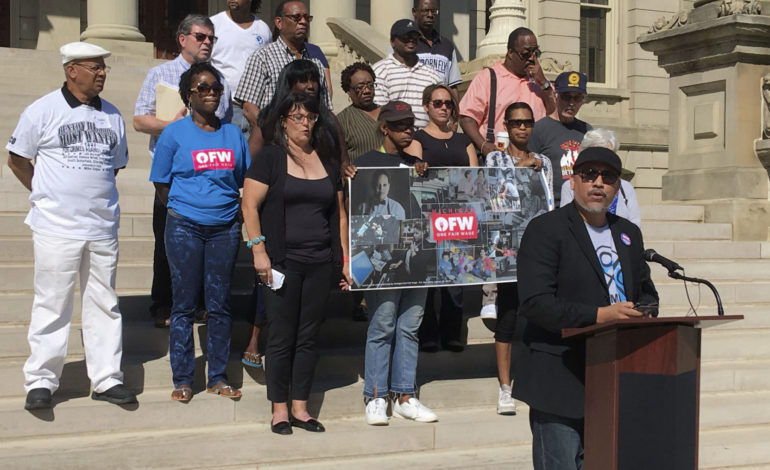 Pete Vargas, campaign manager for the One Fair Wage ballot initiative that would raise Michigan's minimum wage, speaks at a news conference on Tuesday, Sept. 4, 2018, on the steps of the State Capitol in Lansing - Photo by AP

LANSING — On Wednesday, state lawmakers adopted proposals to raise Michigan’s minimum wage and require employers to offer paid sick leave, keeping the citizen-initiated proposals off the November ballot and making it easier for the GOP-majority legislature to amend them after the elections.

The proposals that Michigan’s Senate and House adopted would gradually raise Michigan’s minimum wage to $12 an hour by 2022, including for tipped workers, and required paid sick leave for employees. They were brought by committees that required thousands of signatures to put the initiatives on the ballot: Michigan One Fair Wage and MI Time to Care, respectively.

Democrats are de facto supporters of the proposals. However, most Democratic lawmakers in the House and Senate voted against them, fearing their Republican colleagues passed the laws with the intention of later killing them during the lame-duck session between the general elections and when the newly elected senators and representatives assume office in January.

They say the move puts the measure at the will of Republican legislators, who share the interest of corporations, and away from the hundreds of thousands of voters who signed petitions.

The Michigan League for Public Policy’s Gilda Jacobs said the proposals’ passing is something that should usually be celebrated, but that the league will “push for a gubernatorial veto of any efforts to water these policies down.”

“Sadly, this legislative action was not based on the merits of these public policies or the thousands and thousands of workers who will benefit from them,” Jacobs said. “From the mouths of the Senate Republicans themselves, this move is part of a plan to adopt the proposals—keeping them off the ballot in November—and then amend them later to change their intent and impact.”

All Democratic senators voted “no” on the measures, while some Democrats in the House voted both in favor of them and others against.

State Sen. David Knezek (D-Dearborn Heights) told The AANews he voted against the proposals because he recognizes that his GOP counterparts’ intentions are to amend the proposals’ language to ultimately take away key provisions meant to protect people.

He said the move to adopt the proposals is “unconstitutional” because it “undermines the will of the people.”

“For years, I’ve been fighting for increasing the minimum wage,” Knezek said. “But not just to be able to pat ourselves on the back and two weeks later to gut the language.”

He added that he’s concerned about imminent amendments to the proposals’ language that could change how sick leave is administered or the requirement of having to compensate restaurant workers who rely on tips.

However, his greatest fear is that Republican legislators would kill the entire measures by a simply majority vote, he said.

Knezek said the key to safeguarding the proposals is for Democrats to turn out in large numbers and elect legislators who fight for workers’ wages.

Democratic lawmakers are now tasked with standing united in preserving the adopted language, he added.

State Rep. Sylvia Santana (D-Detroit) told The AANews she voted against the proposals because while she agrees with their underlying values, they are enacted with “special interests” in mind and without taking “people’s voices” into consideration.

“They’re not allowing the process to play out as it should,” she said. “It’s a bait and switch tactic.”

She added that it’s going to take a “blue wave” in Lansing to help preserve the provisions in the ballot measures.

In a statement, Santana reiterated her commitment to the values of earning a fair wage and said she stands by the ideas included in the ballot proposals.

“Since these initiatives passed with overwhelming support, the people of Michigan expect that their government will honor their wishes and not gut the legislation that they have long been fighting for,” she said.

However, State Rep. Abdullah Hammoud (D-Dearborn) told The AANews that while Democrats would ideally liked to have Michiganders vote for the proposals on the ballot, he voted in favor of adopting the proposals because he recognized it would pass by a majority Republican vote and wanted to have a say in securing a higher wage for workers.

Hammoud said he will “fight tooth and nail” to protect the provisions and to make sure that they’re not drastically amended or cut during lame-duck sessions.

He credited his Republican colleagues for crossing party lines and voting based on typically Democratic values, saying a better outcome requires both parties to work together.