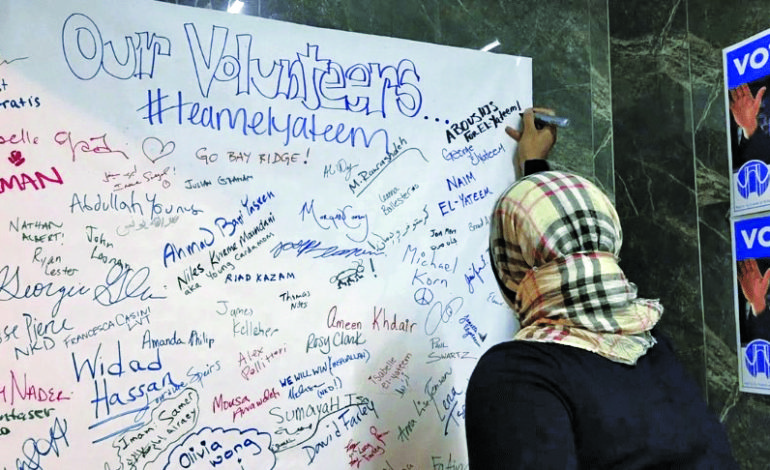 A supporter signs a volunteer board

BROOKLYN, NY — Ahmed Mansour’s film “Brooklyn, Inshallah” documents Khader El-Yateem’s 2017 campaign for New York City Council. Not only did El-Yateem’s position as a Lutheran pastor make him distinguishable from other candidates, his identity as a Palestinian American immigrant did so as well. From that, he was even subjected to Islamophobic remarks while being visibly non Muslim.

Historically, there has never been an Arab American member of the New York City Council. This has made it difficult for Arab Americans residing in Brooklyn to trust the Democratic process. Less than 300 of the 40,000 Arab Americans in the area voted prior to El-Yateem’s campaign. On Election Day 2017, 3,000 Arab Americans voted for him. Though El-Yateem did not win the election, the campaign itself was galvanizing. It even drew support from the likes of Abeer Qawwas, a prominent community organizer, and political activist Linda Sarsour. Sarsour initially introduced Mansour to El-Yateem, but when filming started, the community was hostile. While shooting in Brooklyn’s Bay Ridge neighborhood, Mansour was often asked to put away his camera for the first few weeks— but this hostility was justified. After gaining the trust of the locals, he was informed that the very neighborhood he was shooting in was wiretapped following the September 11 attacks. This experience was not only traumatic but inflicted an internalized sense of racism and Islamophobia within the people of Bay Ridge.

During shooting, Mansour observed the community’s growth. And though El-Yateem finished second in the primary to Justin Brannan, it was only by 8 percent. This victory in itself was a game changer. Currently, the people of Bay Ridge Brooklyn continue to raise awareness of the importance of the Arab American vote. El-Yateem’s campaign was only a push that put this trust in the Democratic process back in motion.