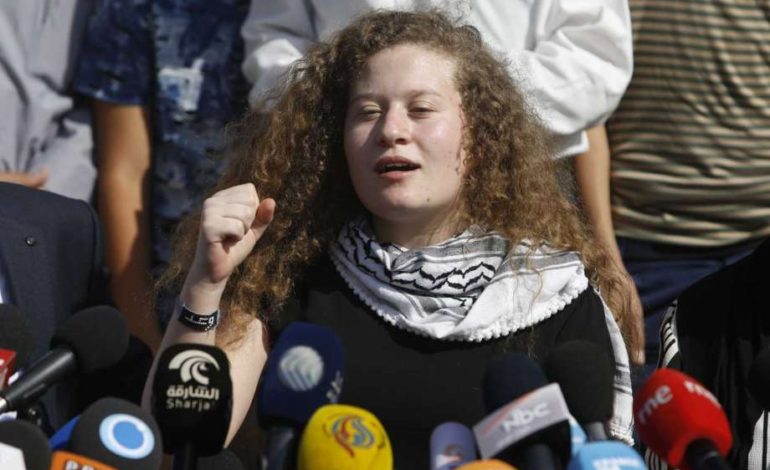 DEARBORN — Famed Palestinian activist Ahed Tamimi, held at an Israeli jail at 16 for slapping an Israeli officer, will be the keynote speaker at the Arab American Civil Rights League’s (ACRL) seventh annual Fight for Justice Gala on October 11 at the Ford Community and Performing Arts Center.

If Tamimi, who had previously been denied entry to the U.S., is denied entry again, she’ll be addressing the audience via a live video feed, said ACRL Board Chairman Nasser Beydoun. However, the ACRL is working on obtaining a visa for her.

Tamimi, 17, is from the village of Nabi Salih in Palestine’s West Bank. She has become best known for appearances in images and videos in which she confronts Israeli soldiers. Her supporters consider her a symbol of resistance and a courageous advocate for Palestinian independence.

“She is obviously someone who has been of international interest over the course of her activism,” said ACRL Executive Director Rula Aoun. “Following her release, she is someone we consider as an inspirational figure against oppression and racism, and [her speech] would be line with our theme for the gala: ‘Injustice anywhere is an injustice to all.'”

Last December, she was detained by Israeli authorities for slapping a soldier. The incident was recorded on video and went viral, sparking international interest and debate. Tamimi was sentenced to eight months in prison and released on July 29.

Tamimi has been described as one of the new symbols of Palestinian resistance to Israeli military occupation in Palestine’s West Bank.

At 11-years-old, she was commended for her courage by Palestinian President Mahmoud Abbas for attempting to intervene during her mother’s arrest in August 2012.

By 2012, she had become an internationally recognized figure. She has been compared to Malala Yousafzai, Che Guevara and even Joan of Arc. Her face now appears on T-shirts. Two Italian artists painted her face on the giant wall that separates Israel from the West Bank (they were subsequently arrested and told they had three days to leave the country).

Nelson Mandela’s grandson has also invited her to South Africa to receive an award for her bravery.

Wayne County Executive Warren Evans will be awarded at the gala, “for his ethical leadership and diverse representation in government.”