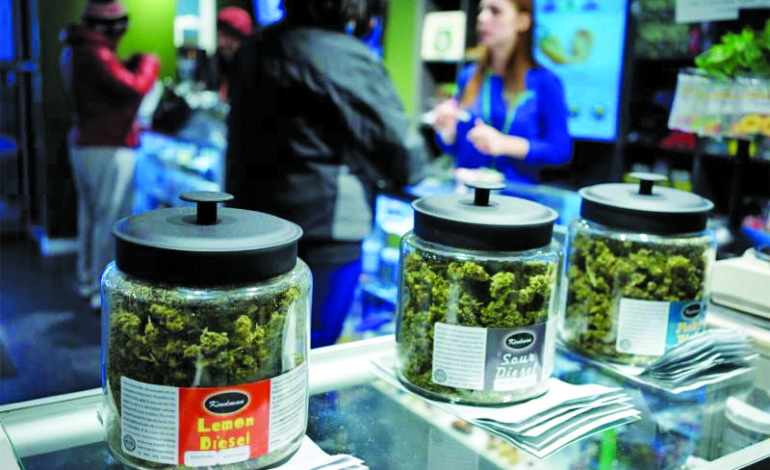 Customers at a marijuana shop in Denver, Colorado - Reuters

LANSING — A recent survey by the Detroit News and WDIV-TV found that Michigan voters favor a recreational marijuana initiative on the ballot this November.

The new poll of 600 Michiganders suggests marijuana Proposal 1 would pass comfortably nine weeks before the election, while Proposal 2, to end gerrymandering, was split in thirds with 38 percent supportive, 31 percent opposed and the remaining 31 percent undecided.

Though there is some criticism from the Michigan Republican Party and conservative groups, a vocal citizen opponent group has not surfaced.

More than 56 percent of those participating in the poll reported support of marijuana legalization, while 38 percent were opposed, with just 6 percent undecided. Forty-three percent of participants identified themselves as Democrats, while 37 percent described themselves as Republicans and 20 percent as independents.

The Detroit News reported that age appeared to be the most prevalent factor, rather than partisanship.

37 percent of participants over the age of 65 supported recreational legalization while 79 percent of people aged 18-29 supported the proposal, with about 72 percent support from those aged 30-39.

There was a margin of error of plus or minus 4 percentage point for the poll.

The poll started before language on the ballot for the marijuana proposal was finalized by the Board of State Canvassers.

Pollster Richard Czuba from Lansing-based Glengariff Group Inc. told the Detroit News it was interesting to him that the numbers in the poll have been so consistent.

“There are hardly any undecided people left on this issue,” he said. “It’s baked into the electorate.”

Czuba also told the News he thinks a third of those polled simply didn’t know what gerrymandering is and that his group has a lot of work to do educating voters, with less than 60 days until the election.

Some Michigan voters support creating an independent commission to redraw legislative and Congressional district boundaries, but based on the survey the initiative seems to lack the kind of support organizers would normally hope to gain before launching a campaign.

The poll showed stark partisan differences on Proposal 2. The proposed commission would include four Democrats, four Republicans, and five independents overseen by the secretary of state.

According to the poll, Democrats mostly support the concept, while independent voters were split evenly and only 20 percent of Republicans support it.

The poll did not ask voters about Proposal 3, which was sent to the ballot last week, and would allow no-reason absentee voting, straight-ticket voting and expand registration options.