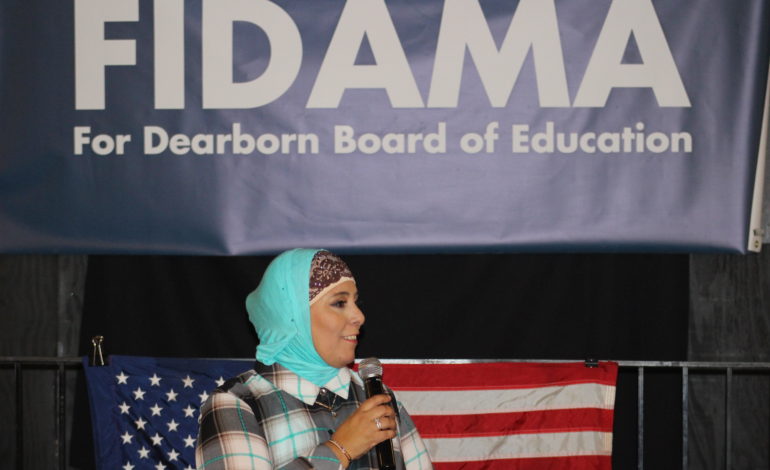 Aman Fidama speaks to supporters at a fundraiser in Dearborn, September 10 - Photos by The AANews

DEARBORN – More than half of the candidates running for two seats on the Dearborn Board of Education are of Arab origin, with one of them – Aman (Amy) Fidama – being the first Yemeni American woman to run for office in Michigan.

Two six-year seats are up for grabs and voters will determine who’ll fill them on November 6.

“On November 6, we all have an important decision to make, a decision that will impact the future of our children and of generations to come,” Fidama told the crowd at her first fundraising dinner.

The Dearborn Board of Education oversees administration of the K-12 public schools and Henry Ford College.

At a fundraiser on September 10 at La Pita Banquet Hall in Dearborn, Fidama told The AANews she was not running with breaking that precedent in mind, but that mainly and most importantly she is running because she “cares about education, Dearborn schools and the children.” Supporters of Aman (Amy) Fidama gathering at LaPita Banquet Hall in Dearborn on September 10. – Photo by The AANews

However, Fidama said she’s excited to have taken the “courage” to run and to have paved a path for other Yemeni American women to seek public office.

Fidama was born and raised in Dearborn. She is married to Walid Fidama and both have raised a family of eight girls. Five have completed high school in the district and attended or are attending Henry Ford College. The other three are currently enrolled in Dearborn Public Schools.

“I want to give back to the community and be involved in advancing  and improving our children’s lives,” Fidama said. “What the district gave to my kids, I want to pass along to the next generation.”

While she said the current condition of Dearborn’s schools is in good shape and that current school board is “on top of everything”, she’d like to bring more attention to upgrading school infrastructure, making schools safer, encouraging parents participation in PTA and continue to be fiscally responsible.

When asked about safety, Fidama said she believes the schools today are relatively safe, but that the district should increase its active shooter preparation and have a robust plan in case of an incident.

“You can never be safe enough” she said. “Healthy kids mean healthy learning.”

Surrounded by a crowd of supporters, Fidama, a community activist for more than 25 years, said she hopes the public will elect a candidate who deeply cares about the children, schools and the city.

“We all believe in Dearborn and the opportunities that it presents to our children and their children,” Fidama told the crowd that filled the banquet hall. “Our children are our future and the schools have a big impact on their lives. This is why we choose to live in Dearborn in the first place.”

Sam Beydoun, a candidate for the Wayne County Commission, said Fidama is making history and encourages the empowerment of women everywhere.

“Amy will be a strong voice for all the students in our district,” he said.

Mohamed Ali Saleh Mohamed, a supporter of Fidama, told The AANews he believes that although other Arabs will be on the ballots for the same position, Fidama is the candidate who’s most relatable, honest and willing to go above and beyond to help our children.

Mohamed said he’s proud that a handful of Arab Americans are running, a vast leap from a time when but a few Arab Americans were enrolled in the schools.

Mohamed was one of two Yemenis to graduate from Fordson High School in 1978. At that time, Lebanese Americans made up about 10 percent of the school and there were maybe eight Yemeni Americans enrolled, he said.

When Mohamed came back from touring six years with the army, it was Fidama’s father who met him at the airport and introduced him to the community.

“Her dad helped a lot of people,” he said.