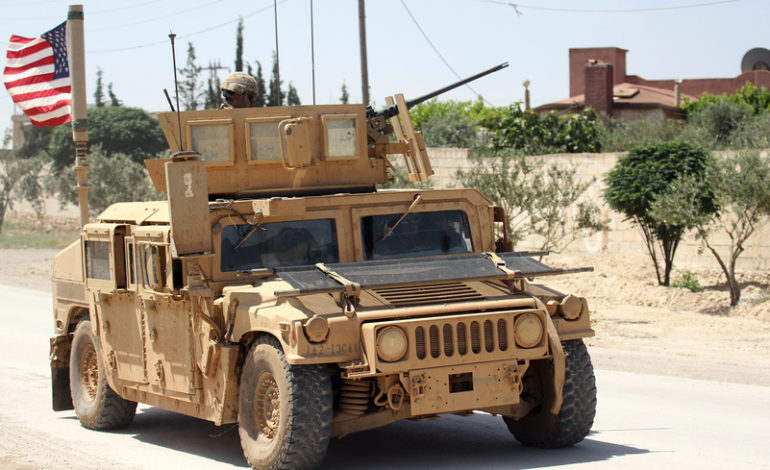 AMMAN — A Syrian rebel commander said on Thursday rare military exercises with U.S. Marines in southern Syria sent a strong message to Russia and Iran that the Americans and the rebels intend to stay and confront any threats to their presence.

Colonel Muhanad al Talaa, commander of the Pentagon-backed Maghawir al Thawra group, told Reuters the eight days of drills that ended this week at the U.S. military outpost in Tanf were the first such exercises with live-fire air and ground assault, involving hundreds of U.S. troops and rebel fighters.

“These exercises have a big importance and have beefed up the defenses of the area and raised the combat capabilities and morale and that of civilians in the area,” Talaa told Reuters by phone from Tanf, near Syria’s borders with Jordan and Iraq.

A U.S. military spokesman said the exercises were a show of force and that the Pentagon had notified Moscow through “deconfliction” channels to prevent “miscommunication or escalate tension.”

“The exercise was conducted to reinforce our capabilities and ensure we are ready to respond to any threat to our forces within our area of operations,” Colonel Sean Ryan told Reuters in an email response to a question on the exercises.

Russia and the Syrian government have repeatedly called on Washington to pull out its troops from Tanf base, where it has declared a 55 km (35 mile)-radius “deconfliction zone” off-limits to others.

Rebels say hundreds of U.S. Marines arrived this month in Tanf to join special operations troops already based in the garrison and participate in the drills, amid heightened U.S.-Russian tensions in Syria and a naval buildup in the Mediterranean.

The “deconfliction zone” has become a safe haven for at least 50,000 civilians who live in the Rukban camp that lies within it. In August Russia’s defense ministry  repeated an accusation that Washington has been harboring ISIS militants within the zone.

“We are staying whether the Russians or Iranians want or not,” the rebel commander said.

The outpost, surrounded by desert, was established during the battles against ISIS militants who used to control eastern Syria bordering Iraq.

After ISIS militants were driven out, U.S.-led coalition warplanes struck Iranian-backed militias on several occasions to prevent them advancing, in what Washington has described as self-defense.

Tanf lies on the strategic Damascus-Baghdad highway, once a major supply route for Iranian weapons into Syria.

Control of the area has long been a goal of the Syrian government and its Russian and Iranian allies.

“The American position has changed completely toward the Iranians,” Talaa said. “Before it was just putting a line to the Iranians not to approach the areas.”

“If Tehran does not respond to the demands of the Americans there is a big likelihood they will be hit,” he said. “It’s inevitable the Iranians leave Syria. This should happen quickly and in a decisive way.”

Turkey works with Russia on Idlib amid lull in air strikes

Turkey, a major player on the Syrian theater, has said it is working with Russia and Iran to stabilize Syria’s rebel-held Idlib region, indicating continued efforts to avoid a Syrian government offensive in the area, where Ankara failed to secure a ceasefire last week.

Damascus, backed by Russia and Iran, has been preparing a major assault to recover the region. The United Nations has warned this could trigger a humanitarian catastrophe in an area where 3 million people live.

Idlib is part of an arc of territory at the Turkish border representing the last major area held by insurgents who have fought President Bashar al-Assad through more than seven years of war. Assad has vowed to recover “every inch” of Syria.

Turkey, which backs the anti-Assad opposition, has been warning Assad and his allies against attacking Idlib. It has reinforced 12 military observation posts in the region and stepped up arms shipments to allied rebels.

France’s foreign minister said on Wednesday that the indiscriminate bombing of Syria’s Idlib region by Russian, Syrian and Iranian forces could amount to war crimes.

“The hypothesis of war crimes can not be excluded … once one begins to indiscriminately bomb civilian populations and hospitals,” Jean-Yves Le Drian told lawmakers.

On Wednesday, top German officials  called for concerted global efforts to prevent chemical weapons being used in Syria, as conservative chancellor Angela Merkel said Germany could not simply look away if such attacks took place.

Foreign Minister Heiko Maas said diplomacy was the top priority to prevent the use of chemical weapons in Syria, but Defense Minister Ursula von der Leyen said a “credible deterrent” was also needed.

The German government said it was in talks with the United States and other allies about possible participation in military intervention in the event of such an attack in Idlib, the last major rebel-held enclave, which is under heavy bombardment.