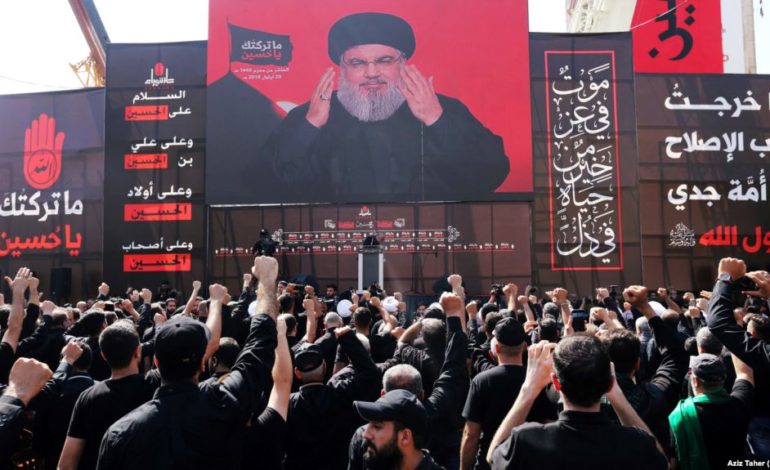 Lebanon's Hezbollah leader Sayyed Hassan Nasrallah gestures as he addresses his supporters via a screen during last day of Ashura, in Beirut, Lebanon September 20, 2018. REUTERS

BEIRUT — The leader of Lebanon’s Hezbollah said on Thursday, Sept. 20, that his group had obtained precision rockets despite Israeli strikes in recent years aimed at cutting the supply route through Syria.

“No matter what you do to cut the route, the matter is over and the resistance possesses precision and non-precision rockets and weapons capabilities,” Sayyed Hassan Nasrallah said, addressing Israel in a broadcast speech.

“If Israel imposes a war on Lebanon, Israel will face a fate and a reality it has never expected on any day,” he added.

Israel regards Hezbollah as the biggest threat on its borders and has said that it has carried out repeated strikes in Syria to prevent it getting arms deliveries from Iran.

Hezbollah will stay in Syria until further notice

On Wednesday, Nasrallah, a key Damascus ally, said that his group will keep its military presence in Syria until further notice, commending the Idlib Russian-Turkish agreement as a step toward reaching a political solution in the country.

“We will stay there (in Syria) even after the settlement in Idlib,” Nasrallah said in a televised address. “Our presence there is linked to the need and the consent of the Syrian leadership.”

Hezbollah has provided vital support to Syria’s military in the seven-year war across the border, helping it regain swathes of the country.

“The quietness of the fronts and less number of threats… will naturally affect the current numbers (of Hezbollah fighters),” Nasrallah said.

“No one can force us out of Syria,” he vowed. “We will stay there until further notice.”

Nasrallah commended the outcome of the Iranian, Russian and Turkish diplomacy to spare Idlib a military offensive that could have led to a catastrophic humanitarian situation.

On Monday, Russian and Turkey agreed to exclude the military solution in Idlib in favor of enforcing a new demilitarized zone in Syria’s Idlib region from which “radical” rebels will be required to withdraw by the middle of next month.

“The outcome (of the diplomatic efforts) is good and reasonable, but depends on results,” Nasrallah said, describing the agreement as a step towards reaching a political solution to the more than seven-year conflict.

Russia, the biggest outside backer of Syrian President Bashar al-Assad in his fight against rebels, has been preparing for an offensive on the city of Idlib, which is controlled by rebels and now home to about 3 million people.

The United Nations had warned such an attack would create a humanitarian catastrophe in Idlib province, where about 3 million people live.

The Idlib region and adjoining territory north of Aleppo represent the opposition’s last big foothold in Syria. Assad has recovered most of the areas once held by the rebels, with decisive military support from Iran and Russia.

Two ex-ministers snub judge after being charged over Beirut blast