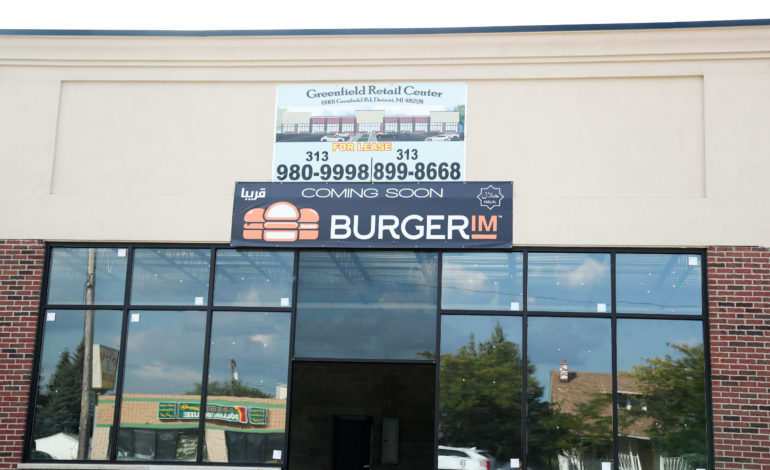 Burgerim, an Israeli franchise, to open on Greenfield Rd. in Dearborn neighborhood - Photo by The AANews

DEARBORN — Walk on the border of Dearborn and Detroit, near Warren Avenue and Greenfield Road, and you’ll be surprised by a sign announcing the upcoming opening of Burgerim, a local branch of a franchise that entered the fast food world in 2015 and is owned by Israeli restaurant entrepreneur Oren Loni.

Following an investigation, The AANews spoke to the local franchise’s owner, Sam Zahr, who said he obtained a license from the company to open several Burgerim restaurants in Michigan.

The name Burgerim is Hebrew for “many burgers.”

Zahr, who is of Lebanese origin, denied knowing of the chain’s Israeli roots, explaining that Burgerim is an American company and said he has a right to open the restaurant as a U.S. citizen. He said he did not violate any laws and expressed dissatisfaction that people are raising doubts about his new investment.

“We must avoid discrimination against others,” he told The AANews. “We are in a multicultural and secular country and it is pointless to build our actions and convictions on the basis of religious affiliation of our neighbors, whether they are Jews, Christians or followers of any other religion.”

He criticized skeptics, saying community members are too often “jealous of the successes of others and seek to destroy them by all means” and that Arab Americans should instead support each other to enhance their successes.

“I think we as a community should be open to others, including Jews,” said Mohammed Saidawi, co-owner of the strip mall where the burger joint is located. “We welcome everyone. In the end, we all have rights and we have to live with each other.

“We respect all sects from all ethnic and religious backgrounds and we have no problem with the Jewish community in the United States,” he added. “Nor will we discriminate against anyone, whether a person or a business.”

Amer Zahr, a Palestinian activist and associate law professor at the university of Detroit Mercy, who is not related to Sam Zahr, told The AANews it’s important to open a dialogue with the strip mall and restaurant’s owners so they can more clearly understand the reasons behind why the Boycott, Divest and Sanction (BDS) movement is becoming increasingly popular.

“We are not boycotting Jewish companies or Jews,” he said, “but boycotting Israeli businesses that support the economy of the Jewish state, which is suppressing Palestinian people. If they do not respond to the dialogue, we have to encourage our community to boycott the restaurant; and I think that the people of our community have enough reasons to abide by that boycott. What Israel did to the Palestinians and the Lebanese is no secret to anyone.”