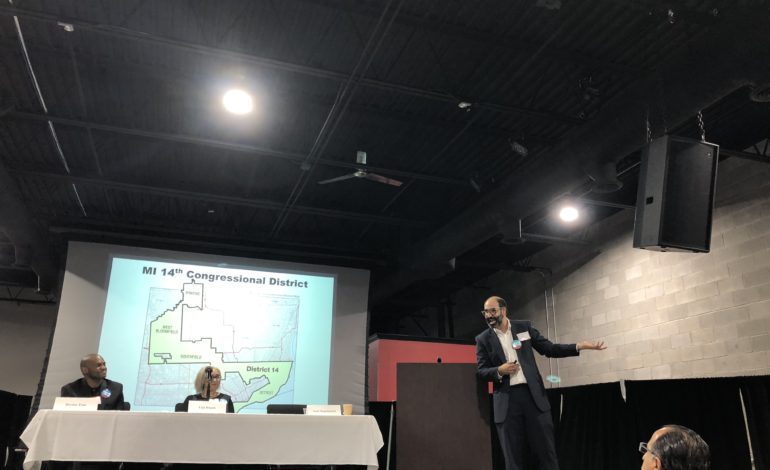 DEARBORN — On Thursday, Sept. 20, Emgage, an organization which encourages muslim Americans to engage in local and national politics, hosted a town hall meeting at the Arab American National Museum’s Annex to educate the community on gerrymandering.

Voters Not Politicians, a nonpartisan group working to pass Proposal 2 on gerrymandering, co-hosted the event with Emgage, giving educational speeches on what gerrymandering is and why the group hopes to eradicate it.

The proposal, if passed, would shift the responsibility of redistricting to a commission made up of volunteer registered Michigan voters.

“Voters should choose their politicians,” Amir Baghdadchi, one of the event’s panelists, said. “not the other way around.”

He said they way politicians draw district lines is specifically to “give themselves an unfair advantage.”

“They want to manipulate the outcome,” he said.

Baghdadchi suggested that this commission would be the solution to the issue of manipulation of district lines by politicians and lobbyists. “We’re going to create a solution,” said panelist and Detroit attorney Dorian Tyus. “By going around the state and asking individuals about what they want to see as it pertains to the commission.

“All voting maps will be drawn by a through a compromise of Democrats, Republicans and independents,” he added.

Tyus said the Independent Citizen’s Redistricting Commission would be fair, impartial and transparent. Made up of 13 individuals, the commission is to include four Democrats, four Republicans and five independent or third party voters.

All registered voters who are not connected to a partisan political group or interest are eligible to become a part of the commission.

The panel encouraged attendees to become involved in spreading the word about Proposal 2 on social media and to volunteer for canvassing.

Baghdadchi said the commission would be formed after January 1, 2020 and applicants would be randomly chosen.

“Thirteen amazing citizens [will be] a part of this commission and you could be one of them,” Baghdadchi said.