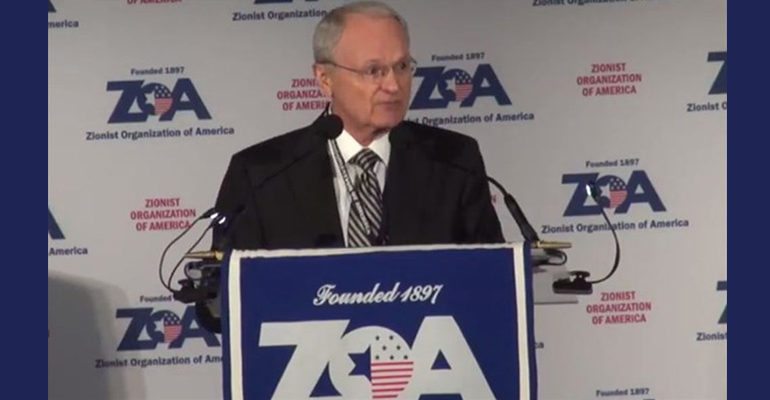 Mort Klein, national president of Zionist Organization of America double down on his racist "filthy Arab" tweet and refuses to back down.

Facing criticism over his use of the slur “filthy Arab” in a tweet last week, Zionist Organization of America national president Morton Klein repeated the phrase in a voicemail to the Forward — and pointedly refused to back down.

Klein asserted in the lengthy voicemail that he had meant that “Arab murderers are filthy Arabs,” and that he had been referring to the Palestinian killer of Israeli-American Ari Fuld in the offensive tweet, which he has not deleted. Klein also issued a new tweet Monday night apologizing “if anyone mistakenly interpreted” his original tweet, writing that he had been referring to “Arab murderers,” and not Arabs in general.

“When you use that language so casually, ‘filthy Arab,’ it’s not just speaking about the act of murder,” said James Zogby, president of the Arab-American Institute. “It indicates an attitude towards the group itself… ‘Filthy Arab’ says he doesn’t like Arabs, and therefore he feels very comfortable with using language to describe Arabs that I think is rather unseemly, period.”

The American-Arab Anti-Discrimination Committee’s national legal and policy director, Abed Ayoub, called Klein a “racist and a bigot” in a statement to the Forward, and called for him to be “shunned by Jewish organizations and pushed to the fringes where he belongs.”

Despite the criticism, Jewish groups have, so far, remained all but silent.

The Anti-Defamation League, which emphasizes its work opposing hate speech of all forms, did not respond to multiple requests for comment last week. The holiday of Sukkot, which falls on Monday and Tuesday of this year, means that many Jewish organizations’ offices were closed Monday, when the Forward broke the story of Klein’s tweet.

Ken Bob, national president of Ameinu, a small liberal pro-Israel group, said that Klein should not use the phrase “filthy Arab.”

“If he wants to criticize the acts of a particular person, he should do so,” Bob said. “We don’t want people making derogatory statements generalizing about Jews and we should not do the same about Arabs.”

In his voicemail left with the Forward, Klein said that when he had written the tweet he had been “overwrought with grief” over the murder of Fuld, who he had known.

The initial tweet, which was posted September 16, was directed at the pro-Palestinian website Electronic Intifada, and asked: “where is your condemnation of the evil murders by your filthy Arab Islamist despicable brethren.”

The ZOA is a member of the Conference of Presidents of Major American Jewish Organizations, members of which are party to a secret agreement not to attack each other in public. The Forward first revealed the existence of the secret agreement in a report this past March.

Online, young Jewish activists have been increasingly critical of the mainstream organization’s silence on Klein’s slurs. Yonah Lieberman, a leader of the upstart anti-establishment Jewish activist group IfNotNow, asked on Twitter if left-leaning members of the Conference of Presidents would ask for the expulsion of Klein’s ZOA from the organization.

“Every day you don’t speak out against Mort is a stain on your organization,” Lieberman wrote.

By Josh Nathan-Kazis, a writer for the Forward Jewish Weekly. This article appeared first at: The Forward