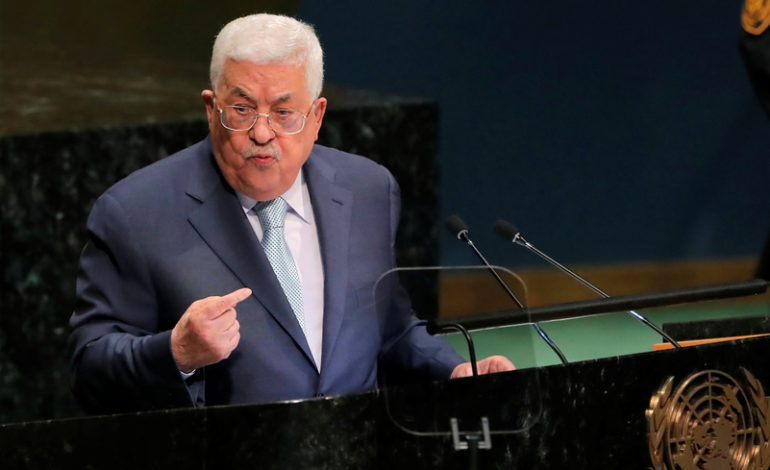 UNITED NATIONS —  On Thursday, Palestinian President Mahmoud Abbas called on the United States to reverse its recognition of Jerusalem as Israel’s capital and cuts in aid to the Palestinians, saying these had undermined the two-state solution to the conflict.

“With all of these decisions, this administration has reneged on all previous U.S. commitments and has undermined the two-state solution,” Abbas said in his address to the annual gathering of world leaders at the United Nations. “I renew my call to President Trump to rescind his decisions and decrees regarding Jerusalem, refugees and settlements.”

The last Israeli-Palestinian peace talks collapsed in 2014 and there are doubts that President Trump can secure what he has called the “ultimate deal” since he recognized Jerusalem as Israel’s capital in December and moved the U.S. Embassy there in May.

The Palestinians want to establish a state in the West Bank and the Gaza Strip, with East Jerusalem as its capital.

Abbas said the United States could no longer be the sole mediator.

“The U.S. acts as a mediator; however now we view the U.S. with new eyes,”Abbas said. The U.S. cannot be a mediator single-handedly.”

Israeli Defense Minister Avigdor Lieberman criticized Abbas’ speech, saying, “Instead of responding to the outstretched hand of Israel and the United States, the only thing that interests (him) is to settle scores and drive the region toward confrontation.”

Palestinians are boycotting Washington’s peace efforts after Trump broke with long-standing U.S. policy by recognizing Jerusalem as Israel’s capital and moving the American Embassy to the contested city.

Netanyahu, who said he was not surprised by Trump’s initial comments on the two-state solution, devoted the majority of his U.N. address to Iran.

Netanyahu said the Iran nuclear deal, which he deeply opposes, had the unintended consequence of bringing Israel and many Arab states closer over their shared mistrust of Iran.

“By empowering Iran, it brought Israel and many Arab states closer together than ever before … in an intimacy and friendship that I have not seen in my lifetime and would have been unimaginable a few years ago,” he said. “…Israel deeply values these new friendships and I hope the day will soon arrive when Israel will be able to expand peace, a formal peace, beyond Egypt and Jordan, to other Arab neighbors, including the Palestinians.”

“There was nothing new in Abbas’s speech,” said Hani al-Masri, a political analyst in Ramallah. “He repeated his known positions and he just kept threatening, without making decisions.”

Speaking in Gaza, Qassem said Trump’s decisions to recognize Jerusalem as the capital of Israel and to move the U.S. Embassy to the city “shows that he underestimates the Palestinian stance and that is caused by the weakness of the official Palestinian stance represented by President Abbas.”