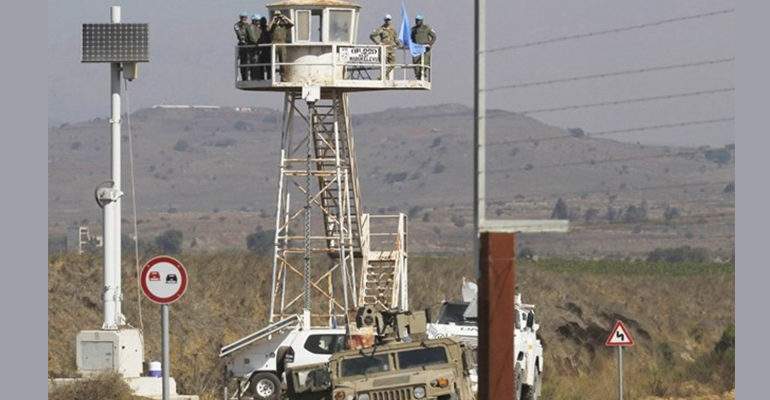 UN troops standing on a watch tower during a visit by Israeli Defense Minister Avigdor Lieberman to the Israel-Syria border Quneitra crossing in the annexed-Golan Heights on Thursday, September 27.

Israel is ready to reopen a crossing point into the Syrian-controlled Golan Heights now that Syrian government forces have regained control from rebels, according to Israeli Minister of War Avigdor Lieberman.

But Lieberman, on a visit to the Israeli-occupied side of the Quneitra crossing on Thursday, said any resumption of operations at the facility depended on the government of Syria.

Lieberman referred to the United Nations Disengagement Observer Force, whose monitoring operations in a demilitarized zone established in 1974 between the Israeli-occupied Golan and the Syrian sector were disrupted by Syria’s civil war.

“At the moment, the ball is in the Syrian court,” Lieberman said.

Military police from Russia, a major ally of Syrian President Bashar al-Assad, have been patrolling on the Syrian side of Quneitra, where Lieberman said Syrian police and customs officials were also present.

In the past, Lieberman said, traffic through Quneitra mainly comprised shipments into Syria of apples grown by Druze farmers on the Israeli-controlled Golan — and the entry of brides for partners on both sides of the armistice line.

Israel occupied the Golan Heights in the 1967 Middle East war and attacked Syria again on the strategic plateau in a 1973 conflict.