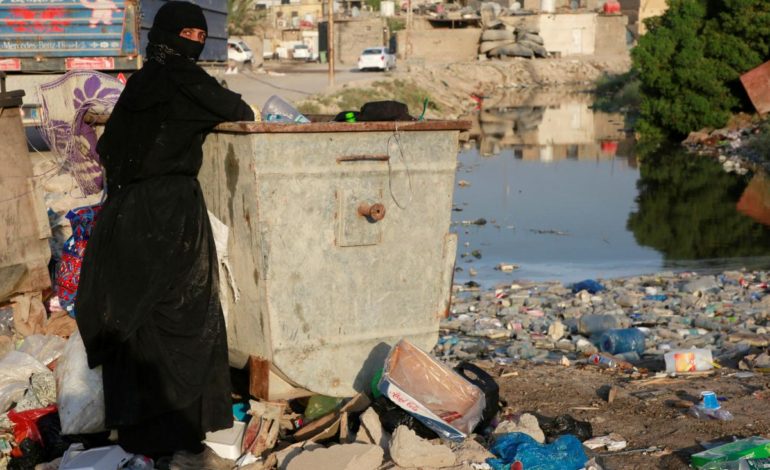 A woman gathers garbage near one of the rivers extending to Shatt al-Arab in Basra, Iraq September 10, 2018. Basra residents say salt seeping into the water supply has made it undrinkable and sent hundreds to a hospital - Reuters

BASRA, Iraq — Once dubbed the “Venice of the Middle East” for its canals, Iraq’s crumbling port city of Basra is slowly dying of thirst.

Crisscrossed waterways that earned it comparisons with the Italian city are now filthy pools of stagnant water.

Its vibrant freshwater lifeline, the Shatt-al-Arab river that runs through it, is now so polluted it threatens the lives of the more than 4 million inhabitants of Iraq’s second city.

“It now causes death; it is highly polluted,” said Shukri al-Hassan, marine science lecturer at Basra University. “Different pollutants can be found in the river, including germs, chemicals [and] toxic algae, coupled with unprecedented concentrations of salt almost like that of seawater, rather, it is indeed seawater.”

According to Hassan, contamination levels of Shatt-al-Arab have increased four-fold over the past 10 years and are increasing, putting more and more people at risk.

Many contrast their impoverishment with the oil wealth the province provides to the federal government’s coffers.

State officials blame a public funding crisis wrought by years of low oil prices for the hardship in a city that was a magnet for Middle Eastern tourists until the early 1980s.

Local resident Raad Shabout Dhahar said the water crisis is just one of many problems that have left his 17-member family, including two wives, his mother and 14 daughters, in despair.

Located where the Euphrates and Tigris rivers merge near the Gulf at Iraq’s marshy southern tip, Basra is one of the few cities in the Middle East without an effective water treatment system.

It had an advanced sanitary infrastructure in the 1960s, but that broke down decades ago, turning waterways into cesspools whose stench is compounded by the hot desert climate.

Much of Iraq suffered destruction in a string of ruinous wars since the 1980s. But Basra was especially hard hit as a city on the front line of the war with Iran, only a few dozen kilometers across the Shatt-al-Arab delta to the east.

The city has yet to recover.

Some 90,000 people have been admitted to hospital, according to the head of Basra’s health department, Riyadh Abdull Amir, with as many as 4,000 a day seeking treating this month.

To improve water supply, the central government is building a major water treatment plant and a desalination complex thanks to a Japanese loan.

The project was expected to be completed by the end of the year, but the departure of Japanese experts due to threats during protests has delayed the process.