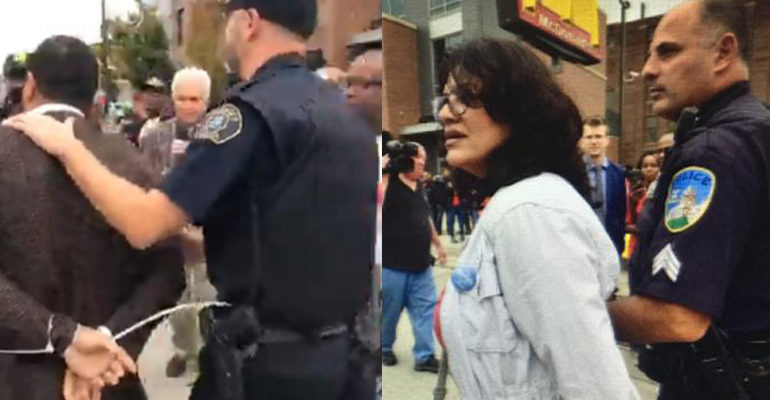 Rashida Tlaib, the expected replacement for former U.S. Rep. John Conyers and Abdul El-Sayed, former democratic candidate for governor, were arrested at a pro-labor rally in Detroit Tuesday afternoon, October 2, with 16 other protesters.

DETROIT — During a pro-labor rally in Detroit Tuesday afternoon, Rashida Tlaib, the expected replacement for former U.S. Rep. John Conyers and Abdul El-Sayed, former Democratic candidate for governor, were arrested on Tuesday, October 2, with 16 other protesters.

The protest, part of a national walkout of fast-food workers organized by Fight for $15, garnered hundreds of participants in Detroit.

When asked if she expected she could possibly be arrested Tuesday in an interview with the AANews, Tlaib said she was no stranger to civil disobedience. “I have trespassed on property, and I disrupted then-candidate Trump,” she said. The march and strike portion of the event began at Woodward and Warren park near Wayne State University.

“[Today] we got into the street,” Tlaib said. “The Q-line got halted, the traffic didn’t know where to go. We just walked right into Woodward and started marching.”

Tlaib, El-Sayed and others set up a table in the middle of Woodward Ave. just past Canfield St.

“Basically in front of McDonalds, we set up kind of a boardroom table, sat around and said we’re ready to negotiate,” she said. “We just sat down in the middle of Woodward with folding chairs and we yelled out ‘Shut it down, shut it down.’ We basically wouldn’t move and [police] forced us to move.”

Tlaib said 14 of the protesters arrested today were women, citing that around 52 percent of fast-food workers are women.

“It was a majority of women of color at the table,” she said.

Tlaib said she heard from women at the rally who struggle with being sexually assaulted at work and finding care for their children.

“I kept getting cheerful,” Tlaib said, “because watching the incredible array of workers wanting to organize a union was very empowering today.”

Tlaib said some of the police officers placing her under arrest told her they agreed with the cause of the protest.

“A couple of them said ‘we’re actually on your side, we get it,’” she said. “It was kind of all a blur, I know one officer said it was disorderly conduct.” Abdul El-Sayed took to Facebook Live after his release from detention.

“I was with 16 other people who didn’t have nearly the kind of privilege that I have,” he said in the video. “These are people putting their bodies on the line because they’re fighting for access to something as simple as the right to a fair wage for the work that they do.”

“If we’re not willing to put our own bodies on the line in service of that fight then we have to ask ourselves whether or not the words mean anything,” El-Sayed said.

El-Sayed told the AANews it hadn’t crossed his mind that he could be arrested before the rally Tuesday.

“Folks were there getting arrested and I was right there,” he said. “I thought ‘if I run away from this right now then everything I believe in and I talk about, I’m not really putting my body where my mouth is,’ so I stood my ground and got arrested.”

“I’m privileged enough not to have to work for the minimum wage,” El-Sayed added. “But I believe we who have privilege have a responsibility to stand and make sure that people without those privileges have their rights respected. That means the right to a strong, real minimum wage that protects access to the basic dignities of life.”

“We don’t always look behind the counter and ask, ‘who is this person, what is their life and what do they deserve?'” he said.

Earlier Tuesday at another Fight for $15 rally in Flint, a pickup truck drove into a group of protesters. Eight people were injured and hospitalized.

Police said that the incident was accidental and the driver cooperated with the investigation but not in custody.