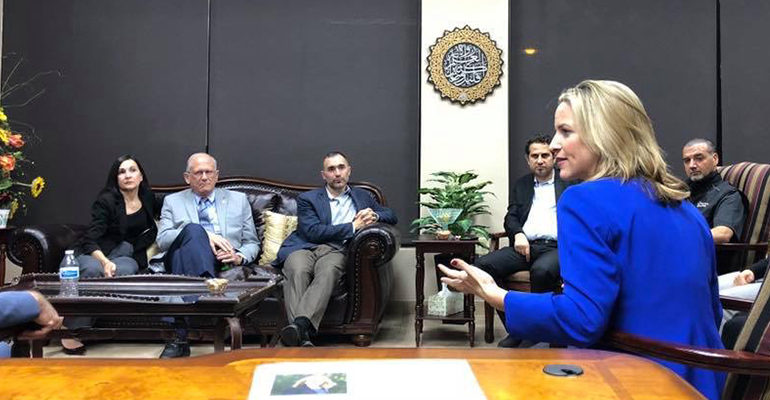 Jocelyn Benson made a campaign stop at The AANews offices in Dearborn, where she met with local business owners, organization leaders, law enforcement officers and court officials, among others.

DEARBORN – Jocelyn Benson sees the secretary of state as the chief guardian of our democratic process.

Benson, a former dean of the Wayne State University Law School, is the Democratic candidate for Michigan’s secretary of state.

On September 28, Benson made a campaign stop at The AANews offices in Dearborn, where she met with local business owners, organization leaders, law enforcement and court officials, among others, to discuss the Arab American community’s concerns and her plans for improving the Secretary of State (SoS) office in Lansing and its branches state wide.

She explained that whether it’s healthcare, education, jobs, small business, or fixing roads – everything voters want impacted in their lives comes down to, “our use of democracy and our access to the vote.”

Benson’s dedication to protecting voting rights began with the Southern Poverty Law Center in Montgomery, Alabama, where she worked as an investigative journalist. She said she was inspired to work to ensure that everyone had the right to vote.

In 2004, she moved to Michigan to work for U.S. Appellate Judge Damon Keith in Detroit. Around that time, at 27-years-old, she began teaching election law at Wayne State University.

Her research duties were to analyze the importance and need for translated election material, including ballots in Dearborn, and their potential to increase turnout and engagement.

As a faculty member, Benson also wrote a book called “State Secretaries of State: Guardians of the Democratic Process”, in which she interviewed secretaries of state from around the country. In doing so, Benson said she understood the magnitude of work that need to be done to modernize the SoS office in Michigan, including ensuring people can vote absentee without reason, vote early or register to vote online.

With respect to elections, Benson said Michigan still does it like, “1932 with a piece of paper, when you had to mail it in.” Jocelyn Benson, Democratic candidate for Michigan Secretary of State, at The Arab American News, Friday, September 28 – Photos by The AANews

Benson said she’s better prepared for the job than in 2010. She became dean of the WSU Law School in 2012, where she “ran an institution, froze tuition, cut a budget, did more with less […] increased employment rates and demonstrated how she can lead institutions with success.”

Benson has also since married a U.S. Army veteran. She said an experience with her husband and a failed election system was pivotal in her decision to run again.

In 2012, when her husband was deployed to Afghanistan, Benson said they did everything right to get his ballot in in time for the August primary elections. They were dismayed to see his ballot returned in the mail and stamped “undeliverable.”

“The system failed,” Benson said. “Because of our laws and policies, his vote was blocked.”

She said that many other states have other options to return a ballot more effectively and still counts as long as its postmarked by election day. She has since heard many similar stories from families across the state.

What Benson described as “real threats to the security of our elections” that emerged from the 2016 presidential election also motivated her to run again.

She also said the secretary of state election is critical this year.

“Because the question will be whether or not we have a secretary of state that will be prepared from day one to secure our elections,” she said, “and that we have a democracy and have better protections in place, where we know that we can trust the results of the election to be an accurate reflection of the will of the people.”

Benson promises to have you in and out of branch offices in 30 minutes or less.

Put simply, Benson said she wants to be a secretary of state who saves people time, saves their money and protects their votes.

Chiefly, she plans to implement a 30-minute guarantee, where customers can get in and out of a branch office in 30 minutes or less.

If she wins, Benson said she plans to spend one day each month working at a branch office unannounced and promised to make Dearborn her first stop in January.

“I want to experience the office through the eyes of not just the consumer but also the workers, get behind the desk and see what they’re dealing with,” she said.

She added that her campaign team has met with Dan Gilbert and Quicken Loans, who have won national awards for great customer service, about ways to train SoS employees in customer service.

Benson said she heard in great detail about the bad service at the Dearborn SoS branch, including descriptions of rude attendees and lines that take about three hours, compared to branches in neighboring cities.

She also heard concerns about the Dearborn branch not being able to accommodate the largely Arab American customer base after the retirement of an Arab American branch manager.

“You need to have the office reflect the community,” she said.

Benson said she’ll prioritize voters’ privacy and securing technology around the privacy of their records, including building firewalls to protect data.

She told The AANews that the optical scan machines Michigan uses provides one of the most secure voting systems in the nation.

To secure elections, she promised to create an Election Security Task Force that would continually advise her on how to ensure the state has the best ideas in election security.

Where Benson said she sees election fraud occurring is in the signature gather process in which people gather signature for petitions and deceive voters about what it’s for.

Benson said she feels like she’s been running for the seat for 10 years.

But in the last few weeks until Election Day, Benson said voters have not been paying attention to the SoS race.

Benson said that an external polling shows her leading the Republican opponent, Mary Lang, vice chairwoman of the Eastern Michigan University Board of Regents, by 10-15 points, while her own campaign polling show the race is a bit tighter.

What’s more, internal polls show that once voters hear about her preparation for the position and her plans to make the branch offices more efficient, they support her overwhelmingly

She is now communicating with voters her ideas and what’s at stake, while listening to their issues and ideas as well, she said.

The Election Day is Tuesday, November 6.