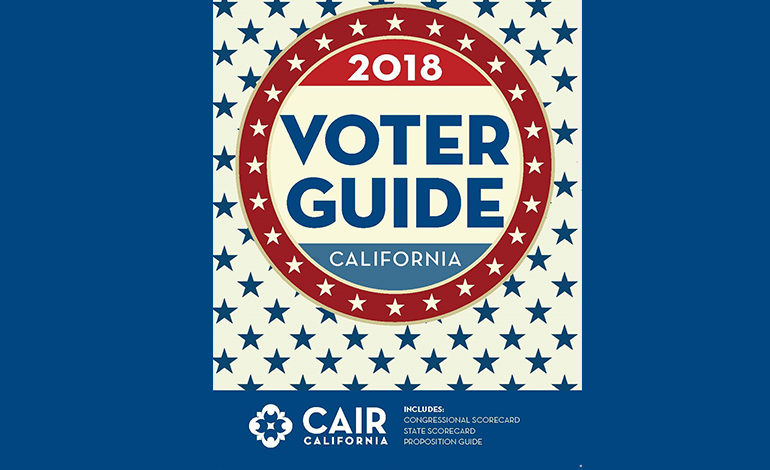 SAN FRANCISCO – With less than a month until the 2018 midterm elections, the California chapter of the Council on American-Islamic Relations (CAIR-CA) released a “California Voter Guide”, which offers resources to assist California Muslims and allies as they prepare to vote in the November election.

The scorecards reflect the voting performance of California’s members of Congress and the votes of State Assembly members and senators.

The votes of each legislator were rated positive or negative depending on how closely their votes on relevant legislation correlated with civil rights and social justice priorities identified by CAIR-CA.

The guide also includes CAIR-CA’s recommendations on the state’s 11 ballot propositions. As a nonprofit, nonpartisan organization, CAIR-CA cannot campaign for or against specific candidates for office, but is able to endorse ballot measures.

“The voter guide is part of CAIR’s overall mission to educate, empower and build political power for Muslims across California,” said Sameena Usman, government relations coordinator of the San Francisco-Bay Area office of CAIR. “As we work to address issues unique to our community under an administration set on pushing us even further to the margins of society, it’s more important than ever that we’re informed before we arrive at the ballot box. As the midterms approach, our elected officials should know: Californian Muslims are paying attention.”

The voter guide is available online, with hard copies available at CAIR-CA offices. Hard copies are set for distribution at mosques throughout California.

The voter guide is part of CAIR-CA’s voter empowerment and mobilization efforts. In addition to the distribution of the voter guide, CAIR-CA’s efforts include a voter engagement campaign, which includes voter registration and education tables and hosting candidates’ forums at local mosques.

Nationwide, CAIR has launched a number of similar Muslim voter empowerment efforts in this election cycle.