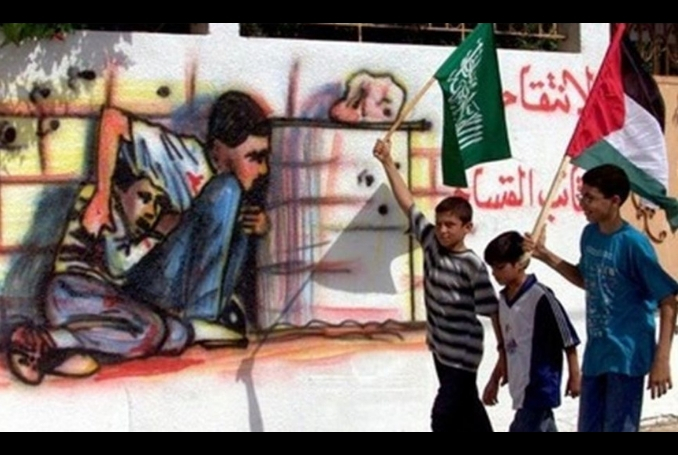 As the frail body of 12-year-old Nassir Al-Mosabeh fell to the ground on Friday, September 28, history was repeating itself in a most tragic way.

Little Nassir was not just another number, a “martyr” to be exalted by equally poor refugees in Gaza, or vilified by Israel and its tireless hasbara machine. He was much more than that.

The stream of blood that poured out from his head wound on that terrible afternoon drew a line in time that travelled back 18 years. Almost 18-years to the day separates Nassir’s recent murder and the Israeli army killing of Mohammed Al-Durrah, also 12, on September 30, 2000. Between these dates, hundreds of Palestinian children have perished in similar ways.

Young as they were, Mohammed died while crouching by the side of his father. 18 years later, Nassir walked to the Gaza fence, stared at the face of an Israeli snipers and chanted free Palestine before he was shot and killed

Reports by the rights’ group, B’tselem, are rife with statistics: 954 Palestinian children were killed between the Second Intifada in 2000 and Israel’s war on Gaza, the so-called Operation Cast Lead in 2008. In the latter war alone, 345 children were reportedly killed, in addition to another 367 child fatalities reported in Israel’s latest war, “Protective Edge” of 2014.

But Mohammed and Nassir — and thousands like them — are not mere numbers; they have more in common than simply being the ill-fated victims of trigger-happy Israeli soldiers.

In that single line of blood that links Nassir al-Mosabeh and Mohammed al-Durrah, there is a narrative so compelling, yet often neglected. The two 12-year-old boys looked so much alike — small, handsome, dark skinned refugees, whose families were driven from villages that were destroyed in 1948 to make room for today’s Israel. A picture of 12-year-old Palestinian boy Nassir al-Mosabeh, who was killed during a protest at the Israel-Gaza border fence, is seen on his table as his classmates react at a school, in Khan Younis in the southern Gaza Strip September 30, 2018. REUTERS

Young as they were, both were victims of that reality. Mohammed died while crouching by the side of his father, Jamal, as he beseeched the Israelis to stop shooting. 18 years later, Nassir walked with thousands of his peers to the fence separating besieged Gaza from Israel, stared at the face of the snipers and chanted for a free Palestine.

Between the two boys, the entire history of Palestine can be written; not only that of victimization and violence, but also of steadfastness and honor, passed from one generation to the next.

“Who will carry on with the dream?” were the words Nassir’s mother repeated, as she held a photograph of her son and wept. In the photo, Nassir is seen carrying his school bag and a small bottle of rubbing alcohol near the fence separating Gaza and Israel.

“The dream” is a reference to the fact that Nassir wanted to be a doctor, thus his enthusiasm to help his two sisters, Dua’a and Islam, two medical volunteers at the fence.

His job was to carry the alcohol bottle and, sometimes, oxygen masks, as his sisters would rush to help the wounded, many of them Nassir’s age or even younger.

In a recent video message, the young boy — who had just celebrated the achievement of memorizing the entire Holy Quran — demonstrated in impeccable classical Arabic why a smile can be considered an act of charity.

Protesting the Israeli siege and the injustice of life in Gaza was a family affair and Nassir played his role. His innovation of taping raw onions to his own face to counter the tears induced by the Israeli army tear gas garnered him much recognition among the protesters, who have been rallying against the siege since March 30.

So far, nearly 200 unarmed protesters have been killed while demanding an end to the 11-year long blockade and also to call for the “Right of Return” for Palestinian refugees.

Nassir was the 34th child to be killed in cold blood since the protests commenced, and will unlikely be the last to die.

When Mohammed al-Durrah was killed 18 years ago, the images of his father trying to shield his son’s body from Israeli bullets with his bare hands, left millions around the world speechless. The video, which was aired by France 2, left many with a sense of helplessness but, perhaps, the hope that the publicity that Mohammed’s televised murder had received could possibly shame Israel into ending its policy of targeting children.

Alas, that was never the case. After initially taking responsibility for killing Mohammed, a bogus Israeli army investigation concluded that the killing of Mohammed was a hoax, that Palestinians were to blame, that the France 2 journalist who shot the video was part of a conspiracy to “delegitimize Israel.”

Many were shocked by the degree of Israeli hubris and the brazenness of their mouthpieces around the Western world who repeated such falsehoods without any regard for morality or, even, common sense. But the Israeli discourse itself has been part of an ongoing war on Palestinian children.

Israeli and Zionist propagandists have long claimed that Palestinians teach their children to hate Jews.

The likes of Elliott Abrahms raged against Palestinian textbooks for “teaching children to value terrorism.”

“That is not the way to prepare children for peace,” he wrote last year.

The U.S.-Israeli propaganda has not just targeted Palestinian fighters or factions, but has done its utmost to dehumanize, thus justify, the murder of Palestinian children as well.

“Children as young as 8 turned into bombers, shooters, stabbers,” reported one Adam Kredo in the Washington Free Beacon, citing a “new report on child terrorists and their enablers.”

This is not simply bad journalism, but part of a calculated Israeli campaign aimed at preemptively justifying the killing of children such as Nassir and Mohammed, and thousands like them.

It is that same ominous discourse that resulted in the call for genocide made by none other than Israel’s justice minister, Ayelet Shaked, where she also called on the slaughter of Palestinian mothers who give birth to “little snakes.”

The killing of Nassir and Mohammed should not then be viewed in the context of military operations gone awry, but in the inhuman official and media discourses that do not differentiate between a resistance fighter carrying a gun or a child carrying an onion and an oxygen mask.

Nor should we forget that Nassir al-Mosabeh and Mohammed al-Durrah are chapters in the same book, with an overlapping narrative that makes their story, although 18 years apart, one and the same.