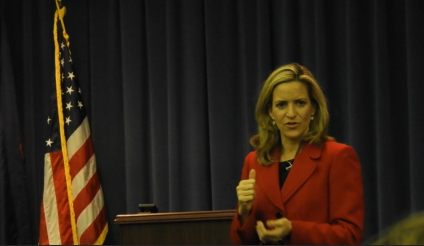 Hammoud and Dingell both made opening remarks. Benson said she believes the people in Michigan deserve a secretary of state who works as hard as they do.

As former dean of Wayne State University Law School, she froze tuition and expanded access to scholarship funds for all students. If elected, Benson said she’ll fight to ban any new vehicle fee increases and will plan to have no one spend hours in line at a branch office.

During the meeting, community members and politicians stressed the importance of election security and discussed gerrymandering and transparency. Gerrymandering is known as a practice to manipulate the boundaries of an electoral constituency.

“I’m running to make sure Michigan is a leader again,” Benson said.

Benson will work to establish an expectation that no one will wait more than 30 minutes at a secretary of state branch office. She also said one of her priorities is to spend a full day each month in a different branch office.

The secretary of state oversees elections. Benson said she’ll lead an effort to protect elections from threats or manipulation.

Just as voters do in other states, Benson said voters in Michigan should be able to vote early or by absentee ballot.

Her vision is to make Michigan a national model in election security and voting rights. She emphasized Michigan is one of a handful of states that don’t allow people to vote early; they can only vote on Election Day or not at all. They also can’t currently register online.

She said it’s a priority to protect everyone’s right to vote.

“Our ability to see change on any general issue all comes down to whether we have access to democracy,” Benson said. “And when our vote is cast, it is counted. If our democracy is not accepted and secure, everything we fight for is in jeopardy and our ability to elect strong representatives is challenged.”

Rep. Dingell added that democracy thrives when everybody participates.

Among all 50 states, Michigan is dead last in government transparency and accountability. Benson elaborated on wanting to champion reforms that will make Michigan one of the best in the nation by requiring instant disclosure of all political and lobbying money.