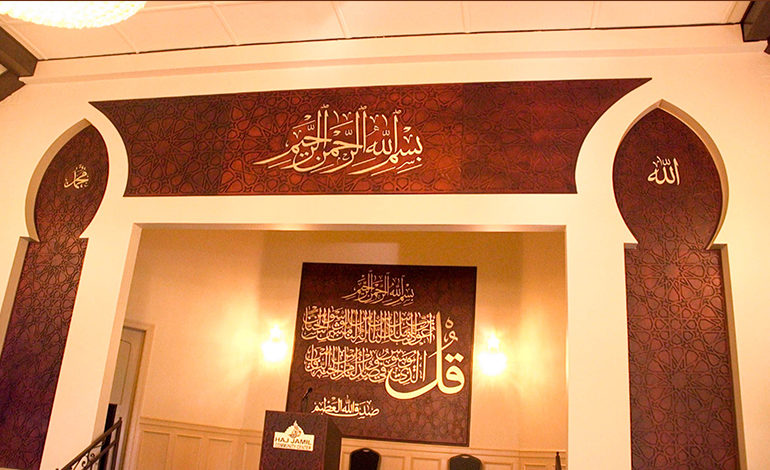 The House of Condolences, which is dedicated to the memory of the late Haj Jamil Bazzi. Phots by The AANews

DEARBORN – Local businessmen and brothers turned an abandoned church on Chase Road in Dearborn into a House of Condolences that’s open to both Muslims and Christian of all denominations.

The five Bazzi brothers, Kayed, Charlie, Joe, Moussa and Ibrahim, wanted to honor the memory of their late father, Haj Jamil Bazzi, who passed away in May 2014 by dedicating this unique charitable project in his name the “Haj Jamil Community Center.”

“It’s a form of charity service for the community,” said Joe Bazzi, the manager and co-owner with his brothers of Byblos Banquet Center. “And in memory of my parents, this is the best way to remember our loved ones who have passed away.”

The main goal of the House of Condolences is to provide a free and beautiful place for the community to host its funeral memorials without “worrying about the cost.”

The two-story building is located at 7350 Chase Road, next to Byblos Banquet Center, and can seat up to 400 chairs, 200 on each floor.

Bazzi appointed a Wisconsin native designer to apply Arabic décor and calligraphy, leaving Christian symbols and icons from the previous church untouched, to give it a, “mixture of Muslim and Christian vibes.”

“This is a house for God, our shared faith and belief in God brings us together,” Bazzi said.

When asked how this project could motivate other entrepreneurs to initiate similar charitable projects, like libraries or otherwise, Bazzi said the Arab community has several “well-off” businessmen who are capable of financing and implementing projects that benefit the community at large in Dearborn.

He said he hopes this project would influence more charitable projects for the community.

The House of Condolences accepts people of all faiths and has ample parking space for its visitors. There’s a place designated for prayer and refreshments, as well as accommodations for handicapped individuals who cannot climb the stairs.