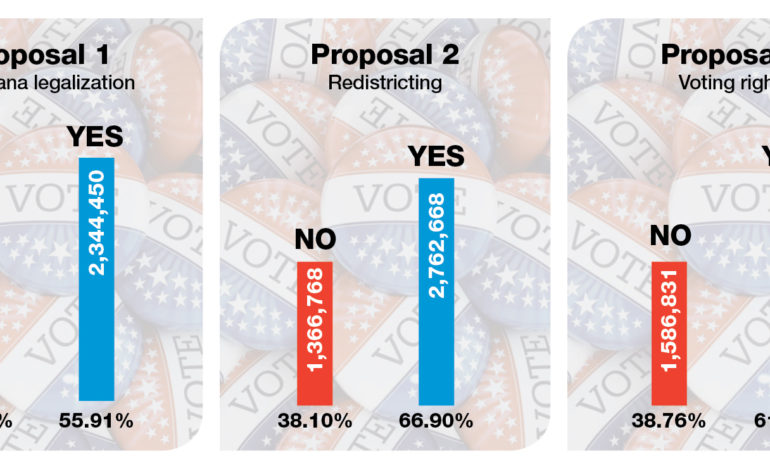 LANSING — All three of the statewide proposals in Michigan passed on Tuesday, November 6.

Proposal One, which legalized recreational marijuana for adults, passed overwhelmingly, 55 to 44 percent, with 2,344,450 voters approving it and 1,849,005 voting no.

Proposal Two’s passage means an independent redistricting commission consisting of 13 citizens will draw new districts for the state house, state senate and U.S. Congress after each census every 10 years. The proposal passed with overwhelming support, 61 percent to 38 percent. 2,507,294 voters approved the measure, while 1,586,831 didn’t.

Proposal Three’s passage should make it easier for residents to register to vote and to cast their votes on Election Day. It will allow automatic registration when renewing a driver’s license, same day registration to vote and straight ticket voting. The proposal passed with overwhelming support 1,586,831, or 66 percent, of voters approved the proposal, while 1,366,768, or 33 percent, rejected it.

“Yesterday, Michiganders cast their votes to approve proposals 1, 2, and 3 that will impact numerous people, communities and industries throughout our state,” Gov. Snyder said in a statement on Wednesday. “Now that the decisions have been made, it’s time to move forward. State officials should begin their work in earnest to implement the new state laws and ensure the proper regulatory frameworks are in place.”