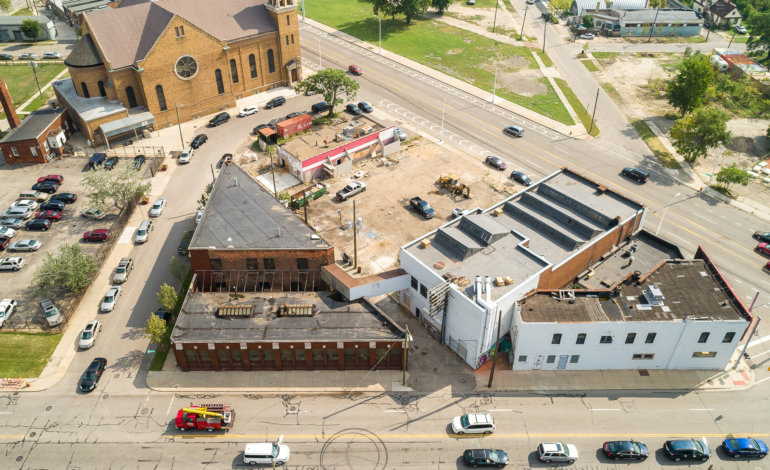 DEARBORN— A partnership of business owners are set to begin designing a new Detroit city park on the corner of Warren and Grand River Avenues.

Prince Concepts, a real estate development company and sponsor of the project, has selected Julie Bargmann, the founder of D.I.R.T. Studio, a landscape design practice, to design the quarter acre public park.

“What makes Detroit interesting is the amount of space that exists in an urban area,” said Philip Kafka, founder of Prince Concepts. “If we get rid of the space, we get rid of Detroit’s intrigue, mystery and magic. Instead of just developing architecture, it is very important to us that we leave the majority of the real estate we own as just that — space.”

“Julie Bargmann and D.I.R.T. Studio are internationally renowned for designing regenerative landscapes,” Kafka said. “And their unique perspective on landscape has enhanced our vision of the role this important space plays within our broader Core City redevelopment plan. Our projects are not just about creating density, they are about activating people’s imaginations and enhancing their well-being through the celebration of landscape.”

Abe Saad, owner of Dearborn Meat Market, and a close friend of Kafka’s, said he hopes the park, close to Dearborn, will interconnect the cities.

“I hope it will bring Arab Americans into that area,” he said. “It’s just something different and sometimes downtown Detroit is too far and this is just seven to ten minutes down Warren Avenue.”

Saad said he met Kafka through being in the restaurant industry.

“Being customers at each other’s businesses we just both connected,” he said. “I loved his personality, he has super positive energy.”

Saad said he’d like to see Arab Americans “step out of the bubble” of Dearborn to meet new people.

“They feel in their comfort zone and once they see people stepping out of that bubble they feel more comfortable,” he said. “You can expand your mindset, your thoughts on Detroit.”

He said people of the Dearborn community in the past associated Detroit with fear.

“But I feel like with the development going on in the last few years, people should take that mindset and put it to the side and give Detroit a shot because it’s not what it used to be,” he said.

As stated in a recent press release, Prince Concepts and D.I.R.T. Studio share a vision for the park as reminiscent of Detroit’s wildflower fields and a densely-wooded portion of 60 Locust and Dogwood trees. The park will also feature spaces for lounging, socializing and special events.

“They are very clever with their ideas,” Saad said, “so I’m looking forward to seeing it all happen.”

Prince Concepts has acquired approximately 1 million square feet of space in the Core City neighborhood of Detroit and plans to transform most of it into unique public spaces and community parks.

It also plans to offer the opportunity to individuals, companies and institutions to sponsor and name trees, benches and terraces in the Warren and Grand River Avenue park.

“The power of landscape, especially its potential in Detroit, is that it offers a critical density for urbanity and the soul to flourish,” Bargmann said. “I am super excited to imagine an industrial strength landscape that honors the neighborhood’s working past and that pushes forward to make places welcome to longtime residents as well as new Detroiters.”