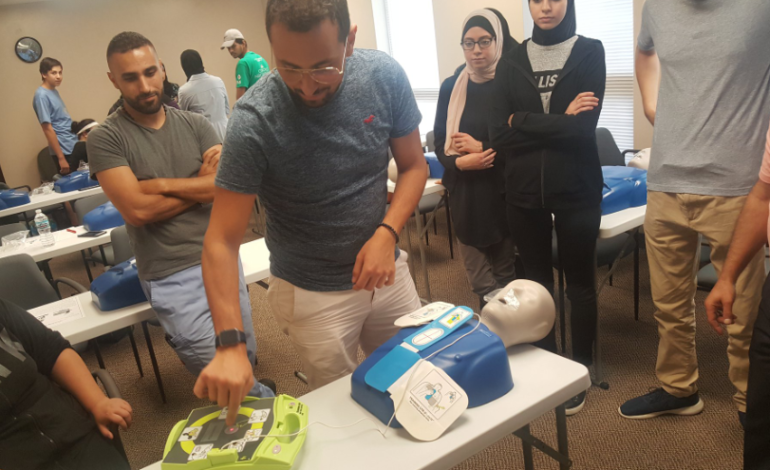 The Ayyash sisters are medical students at the University of Michigan Medical School and both are interested in obstetrics and gynecology. They are very passionate about women’s health and mentorship and both seek to one day aid in humanitarian relief in underrepresented and neglected communities in the Middle East.

“We (as an organization) aim to empower the younger generation to take leadership on healthcare for Arab Americans,” Mariam Ayyash, CEO of AAHI, told The AANews. “It’s about leadership and teamwork; an excellent member would eventually make an excellent leader.”

Moreover, she also said it’s important for rising healthcare providers to feel supported and have the community behind them to better improve overall community health. She shared her experience of being the first member of the family who wanted to pursue medicine; it was a totally new journey for her.

Ayyash described the launch of the AAHI as an inspiration that came from a prior experience of research and collaboration. By the end of her first year of medical school, she grew interested in how diseases and conditions would impact the Arab American community.

She emphasized her experience in doing research with the Breast and Cervical Cancer Control Program at ACCESS. The project on breast cancer further required undergraduate students to reach out to the community and analyze data on Arab American women’s knowledge and awareness of screening for the disease. She told The AANews she recruited many of the undergraduate students from U of M-Dearborn.

“The impact of it made us want a larger scale, a bigger initiative,”Ayyash said, expressing her pride at the project’s outreach and impact.

The project specifically wanted to raise awareness about breast cancer.

“It is important to hear other’s stories and educate,” she added.

The Arab American Health Initiative has a mission to reduce health disparities, highlight healthcare needs and fight stigma within the Arab American community with the long-term goal of improving health outcomes for Arab Americans.

It is a youth-led organization focused on improving the health quality of life for Arab Americans and motivating the youth to chase their dreams through dedication and community outreach.

A key goal of the AAHI is to build a larger network of support communities. End of life seminar hosted by AAHI at ACCESS on Oct. 20, with Dr. Abdulla Hafeez and Najah Bazzy, RN -Photo from AAHI

A heavy aspect the organization deals with is to focus on stigmatized topics within the community. On October 20, the AAHI presented a seminar on the end of life, which included an open discussion to share stories and learn more about caring for a terminally ill loved one. Guest speakers included Abdulla Hafeez, M.D. from Beaumont Hospice and Najah Bazzy, R.N.

Upcoming seminars will focus on domestic violence, vaccine debates, nutrition and health, among other topics.

In addition to seminars and research, AAHI works to educate the community through various methods like blog posts, including “mythbuster” health tidbits, and workshops.

Ayyash described this experience as a fun, educational and inspiring journey. She added that the work the organization does is important because the community would benefit from it.

“It is not one voice,” she said. “It is a group working together.”

She told The AANews the organization’s various committees are passionate about the work they’re doing and about figuring out the best ways to serve the community.

The AAHI also overcomes the language barrier by having posts in English and Arabic on its website and social media platforms.