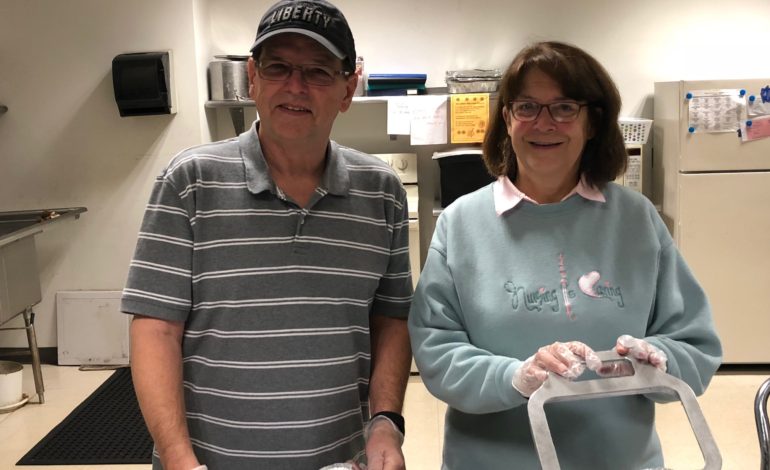 DEARBORN – Barbara and Bob Hayes have volunteered four days a week for the past four years delivering and packaging meals for Wayne County’s Meals on Wheels program.

Barbara Hayes was a nursing school student when she got her first close-up look at the Meals on Wheels program and the positive impact it has on homebound seniors.

From that time on, she knew she wanted to be a part of it one day.

The Dearborn native did just that after she retired in 2014 from a more than four-decade career as a delivery nurse at Oakwood Hospital. For the past four years, Hayes and her husband, Bob, have volunteered for the Dearborn Meals on Meals program four days a week, almost every week.

For their consistent and dedicated efforts, they were named Dearborn’s 2018 volunteers of the year by the Senior Services Division of the Recreation and Parks Department.

They were honored at the  annual volunteer lunch on Oct. 17. Dozens of others were also thanked for their volunteer work with the city’s senior community.

The couple are two of 65 full-time drivers, 15 substitute drivers and numerous college and high school students who volunteer in some capacity with Dearborn’s Meals on Wheels program.

The program is always looking for more volunteers to help its cause. Currently, it urgently seeks full-time and substitute volunteer drivers.

The couple said volunteering for Meals on Wheels has become their “second career.”

They spend two days a week delivering meals to senior residents. They serve about 16 to 18 residents every delivery day. The other two days are spent packaging the meals at the city’s west-side distribution center at Sisson Manor.

Volunteers are allowed to work as their schedules permit. But Barbara and Bob Hayes follow a committed routine, as do other volunteers.

“I really appreciate them because they are always there to help out,” said CeCe Pilon, Dearborn Meals on Wheels volunteer coordinator. “If I need an extra driver, they step up. They are truly deserving of the award.”

Barbara Hayes said they do it because there’s more to Meals on Wheels than just delivering food.

“I truly believe Meals on Wheels isn’t just about food,” she said. “Bob and I have met so many special seniors doing this.”

The service also has a higher meaning to homebound seniors. It gives them someone to talk to and watch out for them.

The couple have provided coffee, salted porches to melt ice, shoveled snow and called 911 for their seniors. They’ve even been invited to a 100th birthday party.

As a team, they have conversations with seniors that range from the weather, to health, to fond memories of families and spouses.

“Many of the seniors we serve are single,” Hayes said. “Some of their families are no longer around or are capable of supporting them. It’s the conversations we have that are so meaningful. We know all about their families are they kind of part of our family. I just really enjoy being able to talk to seniors.”

She grew up on Dearborn’s southwest end, while her husband grew up in nearby southern Dearborn Heights. Both earned associate’s degrees from Henry Ford Community College. They worked long careers; she worked 42 years at Oakwood Main, while he put in 38 years at Great Lakes Steel.

The couple has a history of volunteering. Bob was a frequent helper while their son was in grade school. He was a computer parent and a member of the Dearborn Public Schools Computer Curriculum Committee and was honored with the Parent of Year Award in 2000.

Barbara is a member of the Wayne County Meals on Wheels Advisory Council and Healthy Dearborn. She is an active participant in the annual PANCAN Walk, which helps raise money for the Pancreatic Cancer Action Network.

As for advice to people interested in volunteering with Meals on Wheels, she has a simple message – do it.

“It not only enriches the lives of these seniors we serve, but it has truly enriched our lives as well,” she said.

If you or someone you know is in need of assistance through the Meals on Wheels program, call 734-326-5202. Participants must be over the age of 60, living alone and home-bound.