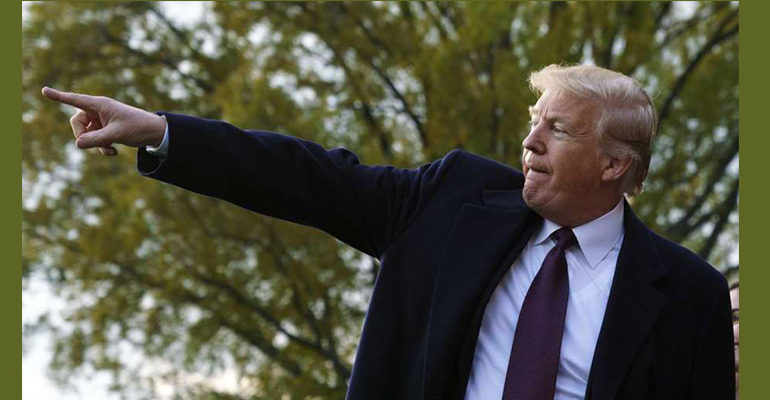 President Trump speaks to the news media while walking to board Marine One to depart for travel to Mar-a-Lago from the White House in Washington, U.S., November 20, 2018. - Reuters

In a tweet, Trump thanked Riyadh for the recent drop in oil prices and called for prices to go even lower to boost the U.S. and global economies.

Oil prices rose on Wednesday but have been trending lower for weeks. Oil prices tumbled more than 6 percent on Tuesday, with U.S. crude diving to its lowest in more than a year, caught up in a Wall Street selloff fed by mounting concerns about slowing global growth.

“Oil prices getting lower,” Trump wrote. “Great! Like a big tax cut for America and the world. Enjoy! $54, was just $82. Thank you to Saudi Arabia, but let’s go lower!”

The Organization of the Petroleum Exporting Countries and its allies are due to meet in two weeks and are expected to curb production to stem rising supplies.

OPEC and its allies, led by Russia, are discussing a proposal to cut output by 1.4 million barrels per day (bpd), sources told Reuters last week.

On Tuesday, Trump pledged to stand by Saudi Arabia even as he said that Saudi Crown Prince Mohammed bin Salman may have known about the plan to murder Khashoggi last month.

Trump said Tuesday that the “United States intends to remain a steadfast partner of Saudi Arabia to ensure the interests of our country, Israel and all other partners in the region.”

“We may never know all of the facts surrounding the murder of Mr. Jamal Khashoggi. In any case, our relationship is with the Kingdom of Saudi Arabia. They have been a great ally in our very important fight against Iran,” Trump said in a statement.

“After my heavily negotiated trip to Saudi Arabia last year, the Kingdom agreed to spend and invest $450 billion in the United States. This is a record amount of money,” Trump said.

Defense Secretary Jim Mattis  said on Wednesday that the United States had a twin principle of accountability and the pursuit of human rights while also continuing to work with Saudi Arabia to end the war in Yemen.

“On the Khashoggi affair, presidents don’t often get the freedom to work with unblemished partners in all things,” Mattis told reporters.

Mattis said he did not think the CIA or the Saudi government had fully established who was responsible for the killing.

With U.S. lawmakers calling for tougher sanctions, Trump said he would not cancel military deals with the kingdom. He said it would be a “foolish” move that would only benefit Russia and China, competitors of the United States in the arms market.

A number of U.S. lawmakers, including some of Trump’s fellow Republicans, pushed back sharply on his assessment and urged further Congressional action.

Secretary of State Mike Pompeo again defended Trump’s stance on Wednesday, saying the United States had already sanctioned 17 Saudis and that Riyadh was critical to the administration’s Iran strategy.

“Not every country shares our value set,” he told local radio station KQAM. “Our mission statement is to make sure that the American people are safe and secure.”