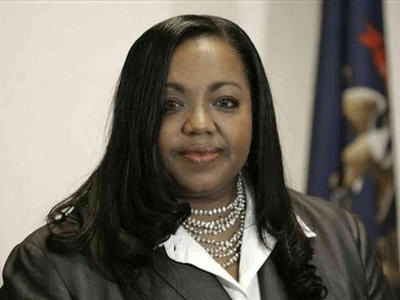 DETROIT — Wayne County Prosecutor Kym Worthy, the first African American woman in Michigan to serve as a county prosecutor, internationally recognized for her work and a contributor to the award-winning HBO documentary “I Am Evidence”, was inducted into the Michigan Women’s Hall of Fame on Oct. 18.

Worthy told The AANews that out of all of the awards she’s received, “this has been one of the most impactful.”

Worthy said she was excited to meet Dr. Mona Hanna-Attisha, the pediatrician who raised awareness about the Flint water crisis, who was also inducted into the Michigan Women’s Hall of Fame last month.

She said that when her legal idol and mentor, Geraldine Bledsoe Ford, the first Black woman in the United States to be elected to a judgeship, was inducted into the Michigan Women’s Hall of Fame in 1993, she felt a part of that.

“I felt like it was me continuing the legacy and knowledge she gave me,” Worthy said of her own recent induction.

“When I first came here she was one of the first people I looked up to,” she said. “I would go to her for guidance when I first started. We didn’t talk strategy, but she mainly talked about how a woman in the courtroom at that time should comport herself and how we should treat someone when we are dealing with a criminal trial.”

Worthy said the most prevalent piece of advice Ford ever gave her— advice she gives to young assistants today— was to treat every case with the same gravity.

The HBO movie “I am Evidence”, a documentary that investigates the way sexual assault cases have been handled by police departments in the U.S., focuses partially on the more than 11,000 untested rape kits found in a Detroit police storage facility in 2009.

Worthy said she was asked to be an integral part of the film when she went to New York for actor Mariska Hargitay’s Joyful Heart Foundation annual fundraiser.

“I think it’s been really impactful,” she said of the film.

The last batch of untested rape kits from the original 11,000 were tested in March, but Worthy said the results are still coming in.

Over the course of eight years of testing, more than 800 serial rapists were identified.

Worthy said rape culture and the attitudes of law enforcement are what ultimately lead to the situation, but that an overwhelming number of untested rape kits belonged to women of color.

“Any major urban area,” she said, “whether it’s Memphis or Cleveland or any of these large city areas with this issue, and there are many of them, you’ll find that a majority of [cases] are women of color. Women of color are just treated differently than other women when it comes to crime, period, but especially when it comes to sexual assault. They tend to be believed less; their investigation is taken less seriously.

“It didn’t surprise me at all,” she added. “When a blonde haired White woman is sexually assaulted they pull out all the stops to make sure it’s assault and they certainly don’t leave her rape kit on the shelf. That’s just a fact.”

Worthy said that because of the treatment women expect to face when reporting a sexual assault, many don’t come forward at all, or wait until many years later.

“Can anyone blame them after what we saw happen in Washington?” she said. “People do blame them, though.”

She said when Christine Blasey Ford came forward and publicly alleged that then-U.S. Supreme Court nominee Brett Kavanaugh sexually assaulted her during the summer of 1982, “was a national spectacle of how not to handle someone who’s been a victim of sexual assault.”

“Sadly, it seems like every few years we’ll hear about a scandal with the Catholic Church, for example, and all the altar boys who had been assaulted by priests decades ago,” she said. “They would come forward and, thankfully, they are believed. I want people to be believed.”

She added that these former altar boys are believed, no questions asked.

“You don’t see anyone across this country demonizing and dragging these adult men, once boys, through the mud because they didn’t report,” she said. “We believe them. A priest is a person of honor, a person of authority. But when a woman comes forward and says they were sexually assaulted 30 years ago, especially if it is someone by who is either coming into prominence or is a person of prominence, they are vilified, demonized and demoralized. That is exactly what happened to Christine Blasey Ford.”

“In the same breath, they ask ‘Why didn’t you come forward sooner?’” she added. “And believe her or not, I believe her; she at least deserved the dignity and and respect that she didn’t get from anyone.”

Worthy said all she can do is have her office be an example of how to treat a sexual assault victim.

“That’s why I wanted all the rape kits tested,” she said. “That’s why we knocked on doors to raise money and get grant funding to get this done. That’s why we didn’t ignore it or sweep it under the rug.”

Worthy said as long as she’s Wayne County’s prosecutor, sexual assault victims in the county will be treated with respect.

“I wanted women to know that if you were sexually assaulted in Wayne County we’re going to give you the respect you deserve,” she said. “We’re going to investigate your case properly and make sure your rape kit is processed timely and then do everything we can. We won’t always be successful; there won’t always be a guilty verdict or there won’t be enough DNA material to get a profile put into CODIS. Maybe we won’t be able to proceed or if your case has been impacted by the statute of limitations, where we legally can’t proceed. But we’re still going to give you, first and foremost, the dignity and respect you deserve.”

Worthy said she hopes the effort will at least give women the confidence to know they will be treated with dignity and maybe more will come forward with reports.

“At least in this office, we will try to give them the justice they deserve,” she said.