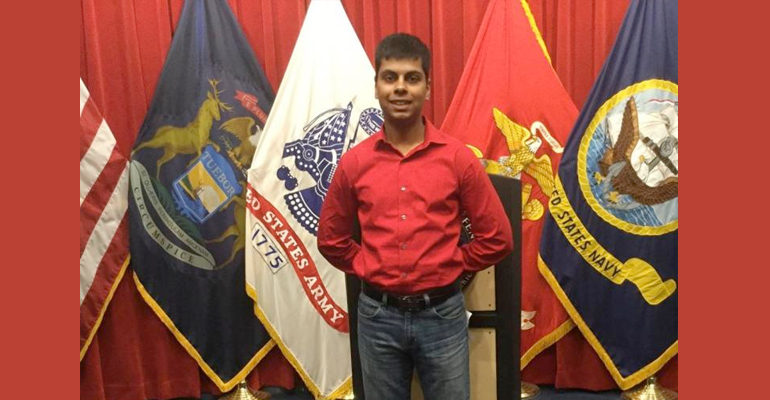 TAYLOR, MI — A federal judge dismissed a lawsuit by the family of Raheel Siddiqui, a 20-year old Marine who died two years ago in boot camp at Parris island, S.C.

“Despite the serious questions that remain regarding the circumstances of Pvt. Siddiqui’s death, the court will dismiss this case,” Tarnow wrote. “Despite strong reservations, the court remains bound by Feres and its progeny.”

Siddiqui’s parents, Ghazala and Masood Siddiqui, sued the Marine Corps in 2017 claiming he was assaulted, hazed and discriminated against because of his Muslim faith.

The lawsuit argued officials failed to protect Siddiqui, who died in March 2016 after he fell from a third-story building.

The Siddiquis argued the government was negligent when it almost immediately declared their son’s March 2016 death a suicide without a full investigation. The death of Raheel Siddiqui (pictured with his family) on March 18, 2016 focused a spotlight on alleged hazing in the U.S. Marine Corps.

Shiraz K. Khan, attorney for the Siddiqui family, urged the court to deny the government’s motion to dismiss.

Khan said the Feres Doctrine did not apply to the case because Siddiqui had not yet started his active military service.

But Tarnow concluded that Siddiqui’s injuries arose from or were sustained in the course of activity incident to his military service, “even though Pvt. Siddiqui was not yet a Marine.”

“Although the Siddiqui family is disappointed with today’s decision, we will proceed with our options under the law,” Khan said in a statement. “After a meticulous review of this Court’s decision, our fight for justice is far from over and there is much to be examined.

“Factually, Feres is not an impenetrable shield,” Khan added, “and this case is not only about the systemic hazing and tragic death of a young American on American soil, it’s also about the fundamental issues related to the military recruitment process.”

A Marine investigation into Siddiqui’s death did recommend discipline against several Marines, including Gunnery Sgt. Joseph A. Felix Jr.

Felix was sentenced to 10 years in military prison for abusing three Muslim recruits, including Siddiqui, among other charges.

Felix’s former supervisor, Lt. Col. Joshua Kissoon, pleaded guilty to charges that included returning Felix to work while he was under investigation for hazing another Muslim recruit earlier this year.

Tarnow noted the Siddiqui family’s suit intended to “persuade the Marine Corps to deter the harassment of Muslim recruits that played a part in their son’s death.”

“It is clear from the actions the Marine Corps took against Sgt. Felix and Lt. Col. Kissoon that they recognize the severity of the problem and are acting to combat religious discrimination at Parris Island,” Tarnow wrote.

“We have a moral responsibility to hold those responsible accountable for Private Siddiqui’s death and continue to pursue justice for the Siddiqui family,” Dingell said. “No family should have to endure this kind of tragedy. I continue to believe that the coroner should revisit the suicide declaration as even the Marine’s investigation shows not all the facts were present at the time of the ruling. My office remains committed to serving the Siddiqui family through their loss and help them find any peace of mind possible.”