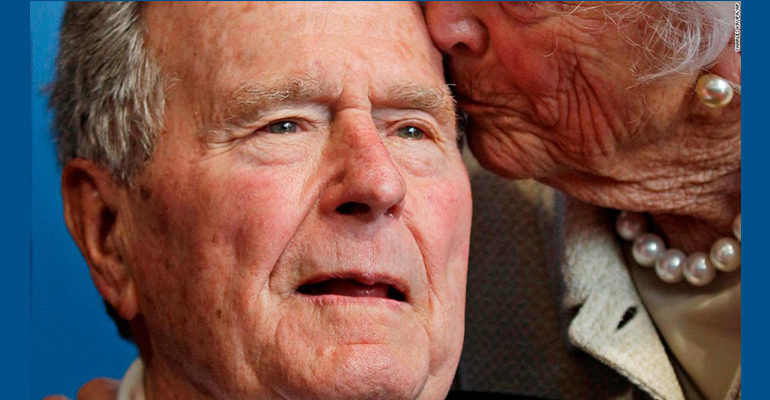 Former First Lady Barbra Bush kisses her husband, former President George H.W. Bush. Both passed away this year, she in April; he in December

Bush, 94, the nation’s 41st president, had been battling several diseases in recent years, including vascular Parkinson’s Disease, bronchitis and a blood infection. He died on Saturday, Dec. 1.

The former president had been suffering since the death of his wife, Barbara, in April. A funeral service took place Thursday in Houston. Bush was buried alongside the former first lady and his late daughter Robin, who died of leukemia as a child, at his presidential library in College Station, Texas.

“So through our tears, let us know the blessings of knowing and loving you, a great and noble man, the best father a son or daughter could ask,” said George W. Bush in a eulogy on Wednesday. “And in our grief, let us smile, knowing that Dad is hugging Robin and holding Mom’s hand again.”

Thousands had previously paid respect to Bush on Monday and Tuesday as he lay in state in the U.S. Capitol Rotunda.

Bush won the presidency in 1988, defeating Democratic opponent Michael Dukakis and becoming the first sitting vice president to be elected president since Martin Van Buren in 1836. His single four-year term as president was an eventful one. In 1990, he vowed to oust Iraqi forces from Kuwait and launched the first Persian Gulf War, building an international coalition including more than 400,000 American troops.

Aside from his focus on expanding military operations and the U.S. presence internationally, Bush was well known domestically for his famous 1988 pledge at the Republican convention: “Read my lips: No new taxes.”

Two significant legislative achievements included the Clean Air Act amendments signed into law in 1990 and the Americans with Disabilities Act that same year.

“America has lost a patriot and humble servant in George Herbert Walker Bush,” former President Obama and his wife, Michelle, said in a statement. “While our hearts are heavy today, they are also filled with gratitude. Not merely for the years he spent as our 41st president, but for the more than 70 years he spent in devoted service to the country he loved – from a decorated naval aviator who nearly gave his life in World War II, to commander-in-chief of our armed forces, with plenty of posts along the way.”