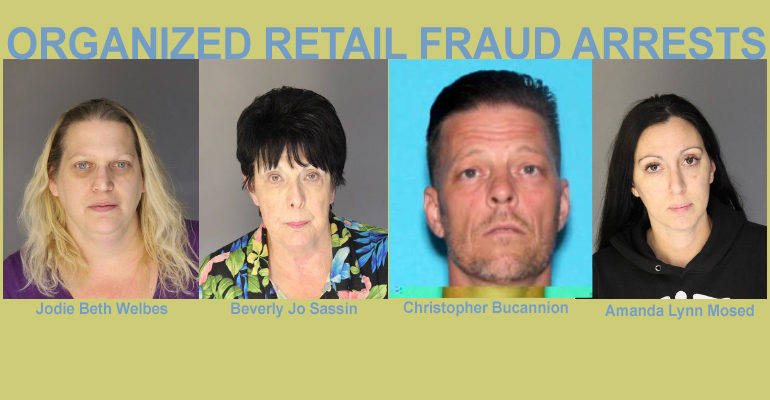 DEARBORN — On Monday, December 3, the Dearborn Police Department and Mayor Jack O’Reilly held a press conference to address crime updates and issues in the city.

In regards to the alleged organized retail frauds, the Dearborn Police Department coordinated with federal, state and local partners to execute warrants against a retail fraud enterprise that had been plaguing the Metro Detroit area for many years. They had multiple search warrants on November 26. Items recovered included a large amount of merchandise and money allegedly used to fund the criminal enterprise.

Beverly Jo Sassin, a 70-year-old New Boston resident, Amanda Lynn Mosed, a 38-year-old New Boston resident, and Jodie Beth Welbes, a 49-year-old Lincoln Park resident, were arrested and charged by the Wayne County Prosecutor’s Office with eight felony counts each. All three were arraigned on November 29 before Judge Mark Somers of the 19th District Court. Bonds were set at $100,000 cash (no 10 percent). A probable cause conference was scheduled for December 7 and a preliminary exam for December 14.

On November 30, another retail fraud arrest involved Christopher Bucannion, a 45-year old man from New Boston, who was also arraigned on the same eight felony charges as the other three suspects.

Bucannion had two additional firearm charges, bringing the total to 10 felonies. Judge Somers levied a $250,000 cash bond with a GPS tether if released. A probable cause conference is scheduled for December 7.

On November 26, Dearborn Police officers responded to a residence in the 2600 block of Bennett Street on a report from the homeowner that her boyfriend, Blair Alen Langston, was suspected of abusing her autistic son. However, she then set up a “nanny cam”, utilized online access and watched how Langston physically abused and injured her pet cat. Langton resides at the home and was arrested for animal cruelty after police watched the footage. The Wayne County Prosecutor’s Office charged Langston with felony torturing of an animal. He appeared before Judge Somers and a $100,000 bond was set. His probable cause conference date subsequently took place on December 3.

On October 25, multiple homes on the city’s west end were broken into during the morning hours. Alert citizens noticed a suspicious vehicle and the occupants fled a traffic stop attempt by police officers.

During the investigation, it was found that the same vehicle and occupants had broken into homes throughout Metro Detroit and Oakland County and had fled from officers from the involved cities as well as the Michigan State Police. The investigation continued and three suspects were identified.

One of the suspects was arrested on November 27 by another area department. Warrants were executed at the suspect’s home in Detroit shortly after and arrests were made on one of the remaining two suspects the following day. The suspect vehicle was also recovered.

Three suspects from the Detroit area were identified. The two who were arrested have charges of multiple counts of home invasion pending. One suspect is Marcus Hobson, 19. The second is a 23-year-old man. Police are still searching for the third suspect, a 25-year-old man.

Hobson was arraigned by video over the weekend. He was issued a $35,000 bond (10 percent) and a probable cause conference date of December 14.

On November 14, a Dearborn police officer stopped a vehicle for a traffic violation. The driver was found to be wanted for a kidnapping warrant out of the Third Circuit Court in Detroit. Jamar Scott, 29, of Detroit was arrested without incident and turned over to the Detroit Police Department.

A Dearborn officer stopped a vehicle near Michigan and Telegraph for a traffic violation on November 28. The driver was found to have a felony warrant out of Ottawa County for violating the Sex Offender Registry Act. Ricky Holloway, 41, of Detroit was arrested and brought to the station to await pick up by Ottawa County.

Weekly crime reduction statistics show crime activity in Dearborn has gone down by 9.1 percent. It was also made clear to residents that they keep valuables out of sight or in the trunk, as well as never to leave valuables in unattended vehicles.