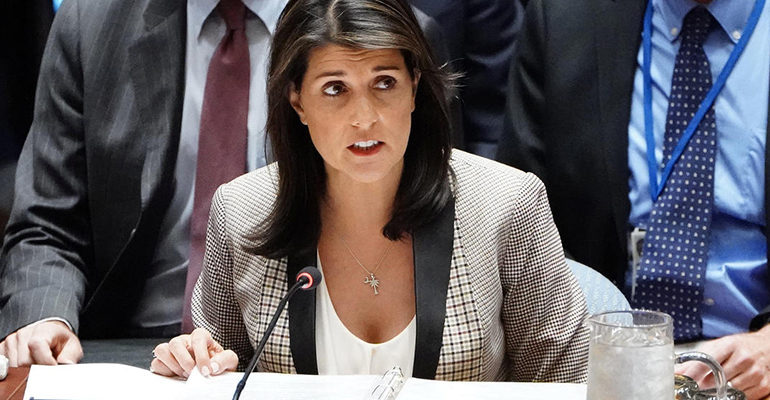 Nikki Haley fails to get enough votes at the U.N. to condemn Hamas

UNITED NATIONS — A U.S. attempt to get the United Nations to condemn the Palestinian militant group Hamas for the first time failed on Thursday because the draft resolution fell short of votes needed in the General Assembly.

The resolution required two-thirds support and while Assembly resolutions are non-binding, they can carry political weight. The U.S. text received 87 votes in favor, 58 against, 32 abstentions and 16 countries did not vote.

In an earlier procedural move requested by Kuwait, the 193-member body narrowly voted to require two-thirds support and not a simple majority for adoption of the draft resolution.

Outgoing U.S. Ambassador to the United Nations Nikki Haley had written to member states on Monday to urge them to vote for the U.S.-drafted text.

“The United States takes the outcome of this vote very seriously,” she said.

Haley, who will step down at the end of the year, has been a staunch defender of Israel.

“Before the General Assembly can credibly advocate compromise and reconciliation between the Palestinians and Israel, it must on record, unambiguously and unconditionally, condemn Hamas terrorism,” Haley told the body before the vote.

The United States is working on a long-awaited plan to broker peace between Israel and the Palestinians, but the Palestinians are skeptical and have accused the Trump administration of siding with Israel on core issues.

Iranian Deputy U.N. Ambassador Eshagh Al Habib accused the United States of trying to deflect the attention of the world from the root causes of the conflict.

“We recognize Hamas as a legitimate resistance movement fighting for the liberation of Palestinian territory from foreign occupation,” he said.