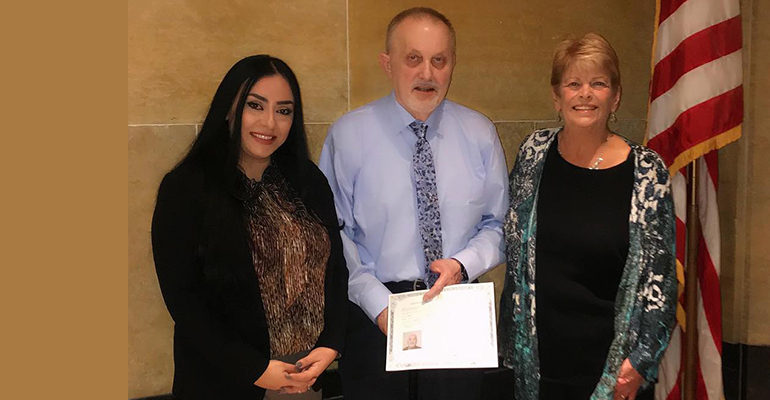 Jim Pawlukiewicz, 72, holds his naturalized citizenship form while standing between his wife, Donna Pawlukiewicz (L), and his immigration attorney, Farah Hobballah, after the naturalization ceremony in Detroit, Nov. 21. Photo courtesy of Farah Hobballah

DEARBORN HEIGHTS — For Jim Pawlukiewicz, a Vietnam veteran who has lived in the U.S. since childhood, the immigration and citizenship process was a 50-year nightmare of never-ending bureaucracy, red tape and roadblocks.

However, Pawlukiewicz, 72, finally had his breakthrough this May thanks in large part to his simple refusal to give up and his decision to seek professional help in the field of immigration.

Considered the man with no country, it’s been a long journey for Pawlukiewicz, but one that finally culminated in success when he received his long-awaited citizenship in November.

“He is elated, he is still excited,” his sister Christine Wojcinski said. “I can’t even tell you; that day was so special for the entire family. They were just riding a high the whole time and just enjoying the moment.”

She added that her brother is now excited to vote and join various clubs using his citizenship.

“He’s always been a (patriot) and always supported the United States,” she said. “But now it’s official. I can’t think of a better word; he’s elated, he really truly is. And so is the whole family.”

Pawlukiewicz, who suffers from severe health problems due to his exposure to the jungle defoliant Agent Orange during his tour of duty, dealt with similar citizenship-related issues in Europe prior to coming to the States. His struggles in finding citizenship continued in the U.S. He was rejected countless times because of misunderstandings and minor errors.

Frustrated after countless years of trying but refusing to give up, the family reached out to U.S. Rep. Debbie Dingell (D-Dearborn) for assistance.

Eventually, Pawlukiewicz’s story made its way to local media. Hobballah then stepped up to the plate to give him the legal help he desperately needed.

While there were many reasons for the denials over the years, Hobballah managed to restore peace of mind by reassuring the family that by following the proper steps and staying on task, with the help of her legal expertise in immigration, victory would come.

“A lot of our attempts (at citizenship) were unsuccessful just because of, you know, errors,” Wojcinski said. “The forms were outdated, deadlines were missed (by the slightest of margins such as submitting a form on the day it was due instead of ahead of time), reasons like that.”

Pawlukiewicz’s European style of filling out forms also led to confusion among officials.

Hobballah’s help quickly put an end to the difficulties, however.

“Farah picked up on it and graciously came on board to represent him,” Wojcinski said. “She was so thorough that I can’t even begin to tell you how much we appreciate everything she did. She took over and made sure every little thing on the form was correct; we didn’t have to worry about technicalities with someone as passionate as Farah. It’s well worth it to have legal representation to make sure things are properly done.”

Hobballah had seen Pawlukiewicz’s story on Facebook and offered to help pro bono.

She began putting together the pieces of one of the biggest local immigration case mysteries in recent memory, carefully studying Pawlukiewicz’s case before coming up with a personal strategy to help undo years of miscommunication, ticky-tack mistakes and misunderstandings. With Hobballah, Dingell and the media in his corner, Pawlukiewicz finally began to make progress; and what had been a 50-year nightmare for him and his family was reversed nearly overnight.

“At the interview he actually received a sort of an apology from the officer for having taken so long to recognize him and to make things difficult for him for the last 50 years of his attempts,” Hobballah said.

“He cried and his wife was like, ‘That’s the first time I’ve ever seen him crying,’” she added. “I called him into my office and this literally went off without a hitch.”

Both Wojcinski and Hobballah had similar recommendations for anyone pursuing citizenship, whether those in seemingly dire situations like Pawlukiewicz or those getting started: Invest in someone who specializes in immigration law, in order to save headaches later.

“The immigration process is more difficult now than it has ever been, for Arabs and non-Arabs alike,” Hobballah said. “That’s the truth. My advice to anyone who’s going through a difficult— any kind of immigration issue, whether difficult or universally seen as simple, they should always go to an immigration attorney. They need someone who can protect their rights and interests.”