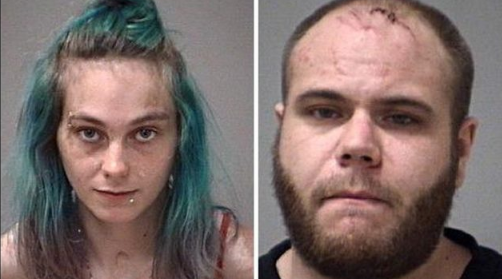 Candice Diaz, 25, and Brad Fields, 29 were convicted and sentenced to prison

SUMPTER TOWNSHIP — A mother was sentenced to 30-60 years in prison for the abuse, torture and murder of her 4-year-old daughter.

Candice Diaz, 25, was sentenced  for the murder of Gabby Barrett. Diaz’s boyfriend, Brad Fields, 29, was sentenced to life in prison for murder and torture in connection with the girl’s death.

“You are a female breeder who neglected your child for the love of a bum named Brad,” Judge Vonda Evans said in Wayne County Circuit Court as she sentenced Diaz.”You assisted this monster in the drowning of your beautiful, precious gift.” Gabby Barrett, 4, was tortured and abused to death

A township investigator testified during the preliminary examination for Fields, the father of Gabby’s younger sister, Zoey, that Gabby spent her final months of life starved, beaten and forced to sleep on a plastic garbage bag in a freezing mobile home.

Evans said Zoey was never at risk of harm because they wanted to “get rid of the problem, and that was Gabby.” She said on New Year’s Eve, Diaz and Fields sent out cards of themselves and Zoey, but didn’t include Gabby.

The medical examiner called the case one of the worst child death cases in 27 years.

Gabby died on New Year’s Day. Police were called to the girl’s home in the Rawsonville Woods mobile home park and found her unresponsive on the bathroom floor.

Police said Diaz told them Gabby was running her own bath and made it too hot, causing her to burn her skin on December 31. They did not seek medical attention and said she wanted to take a bath again the next day. This time, Diaz told police, she found her daughter submerged up to her nose in the water. She said she pulled her from the bath and she vomited, while they attempted to provide CPR.

Officials said the girl’s death was the worst case of child abuse they had ever seen. Investigators said Gabby was given cold baths, hit in the mouth and forced to sleep on the cold floor of the family’s mobile home on a Hefty bag wearing nothing but underwear.

Gabby was tortured and placed in scalded water and her hair was pulled out of her scalp while she was still alive. When she was discovered in the Sumpter Township mobile home, her flesh was hanging from her feet.

A police officer testified that he didn’t find much water in the tub, but did find body tissue in the drain.

“Gabby was supposed to be taken care of by her mother and instead she was scalded by her, treated like a dog,” Assistant Wayne County Prosecutor Bruce Elsey told Evans. “Her skin was peeled off her and left in the sink/tub. Her mother suffocated her to death.”

Elsey said Diaz had no care for her child and only cared for herself.

Diaz and Fields fled from Michigan and were extradited back to Metro Detroit from Georgia to face charges.

The prosecutor said Gabby got justice as a result of the charges and convictions against Diaz and Fields. He also thanked Sumpter Township Sergeants John Toth and Beth Egerer for their work on the case.

An 11-page paper was read in regards to causes of death; messages between Diaz and Fields through Facebook were also brought up in court.

“She called herself a mom,” the aunt wrote. “She’s no mom. I have so much anger for (Diaz). They deserve to be locked away forever.”

Prior to learning Diaz’s sentence, her lawyer, David Cripps, said his client herself underwent extensive psychological evaluations and that Diaz had been left with physical and emotional scars from a house fire when she was a child.

Evans said while that is damaging, it’s no excuse for becoming a “predator.” She said that never in her 21 years on the bench had she seen a child sustain the injuries inflicted upon Gabby Barrett.