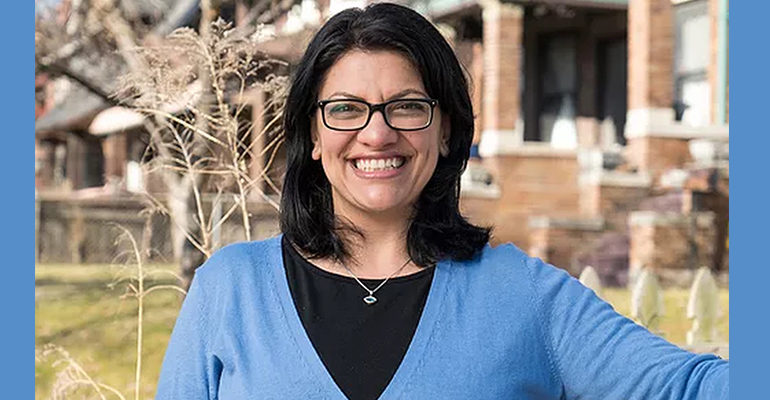 WASHINGTON, D.C. — Due in large part to the abundance of pro-Israel lobbying from organizations like AIPAC, Congressmen and Congresswomen in the United States have largely avoided pledging any support for Palestinians, vocal or otherwise.

But newly-elected Michigan Congresswoman Rashida Tlaib, a Democrat from the 13th District, plans to challenge the status quo by taking a page from the pro-Israel lobbying group’s book and announcing her intentions to lead a Congressional delegation to the Middle East.

In this case, Tlaib’s trip will be to the Israeli-occupied West Bank, according to a report from “The Intercept.”

Tlaib, who became the first-ever Palestinian American elected to Congress after her victory last month, said that she will skip AIPAC’s trip to Israel offered to all newly elected members of Congress and will instead plan her own to the West Bank in order to educate her fellow lawmakers on the plight of Palestinians.

“I want us to see that segregation and how that has really harmed us being able to achieve real peace in that region,” Tlaib told the Intercept. “I don’t think AIPAC provides a real, fair lens into this issue.”

For Tlaib, it’s personal: Her grandmother lives in the village of Beit Ur al-Foqa, about 14 kilometers west of Ramallah, which she plans to visit on the trip. But despite the ongoing occupation, illegal settlements, oppressive system of military checkpoints and other problems in Palestine, newly-elected U.S. representatives are only given the Israeli side of the story on AIPAC-sponsored trips. The wall in Bethlehem that segregates and subjugates Palestinians

According to “The Intercept”, AIPAC has spent $12.9 million on trips to Israel for 363 lawmakers and 657 Congressional staff members over the past decade.

Tlaib, who supports the boycott, divestment and sanctions (BDS) movement against Israel, is the second member of Congress to pledge support for the movement, along with fellow Democrat Ilhan Omar, a Minnesota state representative and fellow Muslim American. She hopes to shed light on Israel’s military occupation of Palestinian territory, which she compared to what African Americans in the U.S. suffered during the Jim Crow era.

The story has been picked up by multiple major online news networks, giving much-needed attention to an issue that has been marginalized in recent years. An Israeli highway and barbed wire fence runs through the city of Beit al Foqa, home of Rashida Tlaib’s grandmother

Despite the complete lack of focus on the Palestinian side of the equation, Rep. Steny Hoyer, a Democrat from Maryland, told “The Intercept” that the upcoming AIPAC trip to Israel is “being done in part to showcase the ‘complexities’ of the conflict.”

“The delegation trip to Israel is an opportunity for freshmen members of Congress to learn more about regional threats and dynamics in the Middle East and the complexities of the Israeli-Palestinian conflict,” said Annaliese Davis, a spokesperson for Hoyer.

Hoyer’s viewpoint and others like it completely disregard the clearly biased and often one-sided views espoused on the tour, however, critics say.

Tlaib’s proposed trip comes at a crucial time for the BDS movement, as lawmakers in both Israel and the U.S. have sought to discourage people from participating. One pending bill moving through Congress currently seeks to criminalize anyone who participates in the BDS movement, according to a report from “The Hill.”