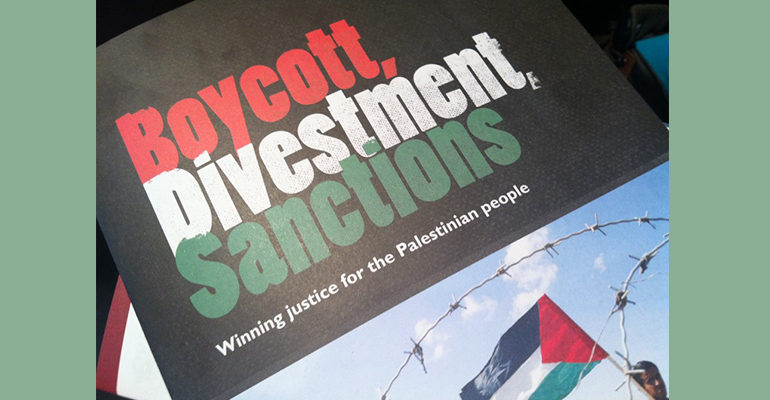 The Boycott, Divestment and Sanctions (BDS) movement against Israel is one of the most popular worldwide boycott movements today.

WASHINGTON — Boycott movements have long been an effective tool for protesters, but a new bill being pushed through Congress aims to penalize people speaking in favor of one of the most popular worldwide boycott movements today: The Boycott, Divestment and Sanctions (BDS) movement against Israel.

Senator Ben Cardin (D-MD) is among those making a last-minute push to slip the “Israel Anti-Boycott Act” through during a lame duck congressional session, the website “The Intercept” stated recently.

In a letter to Congress, the American Civil Liberties Union (ACLU) warned that the amended version of the bill creates unconstitutional restrictions on free speech, even though some of the more aggressive penalties in the original version have been stripped.

“We understand the Senate is considering attaching a revised version of S. 720 to the end-of-the-year omnibus spending bill, and we urge you to oppose its inclusion,” the ACLU said in a  letter  to Congress dated December 3. The bill comes at a time when only 37 percent of people in the U.S. now view Israel as an “ally” according to an October 2018 YouGov-Economist poll and the Boycott, Divestment and Sanctions (BDS) movement against Israeli companies has made headway across the world. Israel has been widely criticized by activists worldwide over the continued siege of Gaza, annexation of Palestinian land through illegal settlements and system of military checkpoints, which critics, activists and peace advocates decry as barbaric and inhumane.

The bill is being seen as part of a push to undermine support for BDS in both the U.S. and Europe, often conflating the movement with anti-Semitism. The new anti-boycott act was introduced last year by Cardin and Republican Senator Rob Portman of Ohio; and would amend the 1979 Export Administration Act to allow penalties for companies who join boycotts of Israel. Offenders would not face jail time, but would instead be hit with criminal financial penalties.

Already, 25 states have enacted laws punishing businesses that choose to boycott Israel according to the activist group Palestine Legal, but this bill could extend them in a sweeping new way. To contact your senator in order to oppose the bill, call 1-202-224-3121 or visit www.senate.gov/senators/contact.