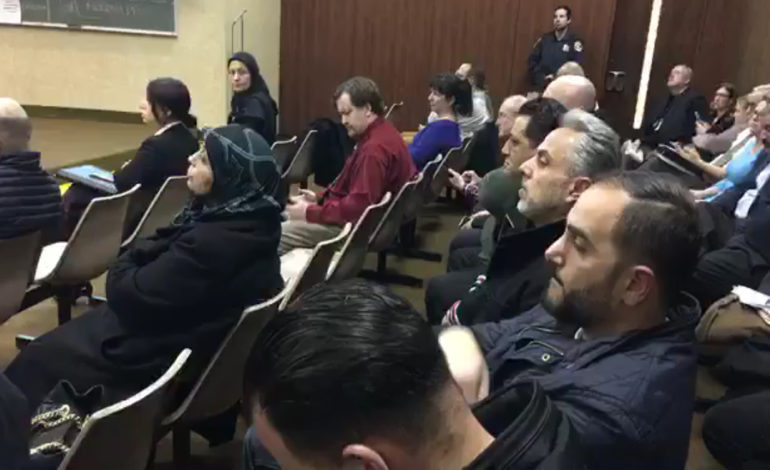 DEARBORN – Dearborn and Dearborn Heights both hosted landmark town hall events on Tuesday as City Council members and residents in both cities gathered to discuss whether or not to allow marijuana-focused businesses within their borders.

With Michigan’s Proposal One going into effect on Dec. 11, allowing adults 21 and older to possess up to 2.5 ounces (71 grams) of marijuana and to grow up to 12 plants at home, the question of  how the cities will look in the coming years has been at the forefront.

Many people have recently expressed their opinions either in favor or against marijuana business bans via phone calls and email, including in Dearborn Heights, whose City Council unanimously voted to opt out of allowing the businesses.

“I just want to say I’ve put in a lot of hours in this, talked to a lot of people, looked up stuff online, newspapers, went to multiple seminars,” said Councilman Dave Abdallah, who added that he was “100 million percent against any marijuana” at first. “I became more open-minded about this as I and I’m sure other Council members read more and more and more,” he said. “But it’s consistent. I have a lot of residents that have contacted or emailed, where a lot of (them), at least at this particular point, do not want it in our community.”

City Councilman Ray Muscat, for his part, said the decision was difficult.

“I just want everyone to know this was a very difficult decision for me,” he said. “I got a lot of phone calls and emails; it was pretty well divided down the middle of the city.”

Abdallah said that allowing such businesses could be a benefit for the city in terms of tax revenue in the future, but it’s an issue that goes far deeper than that.

“I’m sorry, for me personally as a Councilman, I’m not going to make a decision based on just the money coming in,” he said. “Those factors are a lot bigger than just the tax base that will come into our city.”

There are still many questions as to whether or not the facilities could lead to problems, said Councilman Bob Constan. “The impact that this type of business would have on our city remains to be seen.”

He cited an example on Warren Avenue in Detroit where problems have cropped up in the vicinity of a medical marijuana dispensary.

Council members saw the decision to wait as more prudent because “opting out” now will give the city more time to see how things play out in other communities.

Police Chief Dan Voltattorni agreed with the council, stating that he was not sure if his department is prepared to deal with the complexities presented.

“Let’s take our time and make a clear decision,” he said.

The ban will take place immediately and there is no timetable for when it may be revisited.

In Dearborn, a large crowd packed the city’s Administrative Center for a town hall meeting aimed at gaining a better understanding of public sentiment.

“The purpose of this town hall was to have all stakeholders involved speak their peace,” said Council President Susan A. Dabaja. “Non-profits and other organizations in the city have chosen not to take a stance.”

She added that they feel it’s premature to make a statement. Dearborn residents participate in the town hall meeting on Tuesday, December 11 to discuss whether the city should allow or ban marijuana businesses in Dearborn.

She also said residents have been passionate about the issue.

According to Police Chief Ron Haddad, other residents are concerned about the smell and the traffic that growing marijuana in homes would bring.

The Council has been leaning toward a ban. Councilwoman Leslie Herrick said a potential opt-out is attractive for the city because it would allow time to analyze state regulations.

“We’re looking at a sunset clause that goes beyond a year,” she said. “We don’t know what state regulations will be for a year.

“We may or may not opt out,” she added. “…It would also give us the time to study other cities across the state.” Council President Pro Tem Mike Sareini said that feedback he received from the community was split down the middle.

“A lot of people were for it, the economic aspect of it, the tax revenue,” he said, adding that the other side was mostly against it because of moral issues with marijuana.

With the state still deciding on the final guidelines, Sareini and his fellow Council members are working to come up with the best solution.

“For me I think there are a lot of unanswered questions right now,” he said. “The state has a year to come up with rules and regulations. Because of that, there’s a lot that has to be worked out. For us to make sure we make good decisions, we need to know what the rules are and what those entail.”

“We don’t want that drug in our city,” he said.