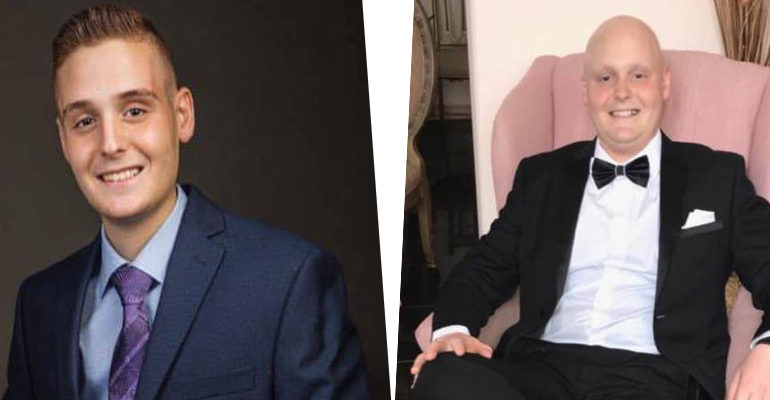 DEARBORN — A high achiever with a passion for dentistry, 18-year-old Mohamad Osman refused to let his battle with Non-Hodgkin’s Lymphoma stand in the way of living his life.

Despite his illness and having to undergo chemotherapy treatments as often as every three weeks, Osman remained an avid runner, biker and swimmer, as well as a high academic achiever with grades regularly in the 4.0 range.

Osman, who received a dental scholarship from the University of Detroit Mercy, passed away on Tuesday, December 11, leaving behind his beloved family and friends, who packed the Islamic Center of America for funeral services that same evening.

His cancer had been in remission since his second round of chemo, according to his father, Hassan Osman, but despite the initial success of the treatments, the cancer returned in an “aggressive” form afterward. With time and options running out, Osman underwent a new type of FDA-approved treatment called CAR T therapy, which engineers patients’ immune cells to treat their cancer.

But the cancer persisted; and Osman’s organs, including his liver, spleen and kidney, continued to give out on him, echoing results of a blood test at Henry Ford Hospital in 2017 that found his organs were receiving little to no oxygen (despite the fact that his heart was beating just fine). Even as his body was failing him, Osman’s heart remained strong, according to his closest friends.

“He was just a really good-hearted person,” Osman’s friend Hassan Hamade said. “When we were in the hospital, all his organs starting failing, but his heart was still beating; God, he had a great heart.”

Osman’s family and friends continued to visit him in his last days, during which he told them he loved them every day.

“He was the kindest person ever and his smile could change your day completely… he loved literally everybody.”

Hospital life is far from easy, but Hamade and Osman bonded over their love for food and family in Osman’s final weeks. Hamade made his way to the hospital at 6:30 each morning to bring Osman his favorite breakfast, a man’oushe, even though he wasn’t always able to eat it due to his medical condition. Mourners paying respect for Mohamad Osman at the Islamic Center of America on Tuesday, Dec. 11

The two friends had always bonded over food, including in the days where Osman “had the ice cream man on speed dial”, and long summer afternoons spent playing basketball and enjoying cookouts with the family.

In remembrance of their shared love for dentistry, Hamade has plans to honor Osman.

“We were both supposed to become dentists,” Hamade said. “I promised him in the hospital that, ‘One day I’m going to open up a clinic and I’m going to put your picture in the waiting room.’

“He was my best friend; he’s who inspires me to become a dentist every day.”

Osman was also an inspiration to his twin brother, Ali, who admired him for the way he continued to live his life to its fullest despite his disease, calling his diagnosis a “wake up call” for himself. Mourners paying respect for Mohamad Osman at the Islamic Center of America on Tuesday, Dec. 11

“The moment he was diagnosed was hard on him, but he accepted it right away and said, ‘I’m still going to live my life,’” Ali Osman told The Arab American News in August. “He keeps me motivated. He’s the reason why I stay positive all the time.”

“He was the most patient, caring and loving friend I ever had,” said Osman’s friend Ali Haidous, 18. “It comforts me to know he’s at rest with God and his Prophet.”

Osman leaves behind his parents, Hassan and Nabilah, his brothers Ali and Adam and his sisters Rayan and Malak.

He was buried at Memorial Gardens Cemetery in Westland according to his father and commemoration services are expected to be held at the Islamic Center of America at 5 p.m. Saturday.