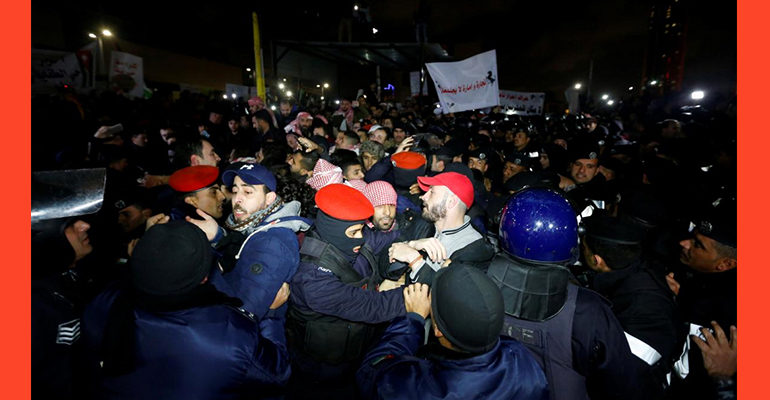 AMMAN — Jordanian authorities deployed hundreds of riot police in the capital and warned activists to stay within the law on Thursday as hundreds of demonstrators staged more protests against tough austerity measures backed by the International Monetary Fund.

Large demonstrations in the summer over an unpopular IMF-backed tax bill brought down the previous government.

Protesters have been holding sporadic demonstrations for the past two weeks and a judicial source said authorities had detained several people for chanting slogans critical of King Abdullah as well as the government.

“(For) anyone who breaches the law there will be punishment,” government spokeswoman Jumana Ghunaimat told reporters on Thursday.

“There are those who want to sow destruction … We must safeguard Jordan’s stability and security,” she said, adding that the government wanted dialogue.

The latest protests erupted after a largely pliant parliament approved a tax bill last month widely seen as making few changes to the unpopular law scrapped after the summer demonstrations.

Many Jordanians say the government, which faces a record public debt of around $40 billion and desperately needs to raise revenue, is eroding the disposable incomes of poorer and middle class Jordanians while letting the wealthy off the hook.

On Thursday, in a move to defuse tensions, King Abdullah ordered the government to draft a general amnesty law that pardons several thousand people jailed for convictions ranging from petty crime to embezzlement.

“This will contribute to easing pressures facing citizens,” the monarch was quoted as saying in a royal palace statement.

The protesters complain that Prime Minister Omar Razzaz, appointed by King Abdullah after the summer protests, has not delivered on promises to jail corrupt officials and businessmen.

“Our demands are bread, dignity and freedom,” chanted demonstrators as scuffles briefly broke out when some protesters sought to break a police cordon to march closer to the prime minister’s office.

Unlike the summer protests in which the country’s unions played a major role, the renewed demonstrations have no clear leadership and many of those participating come from provincial towns hard hit by the economic downturn.

Demonstrators say Razzaz has sought public support for tough economic measures while failing to curb lavish public expenditure and improve public services and that he should resign.

They also called on the monarch to embark on democratic reforms.