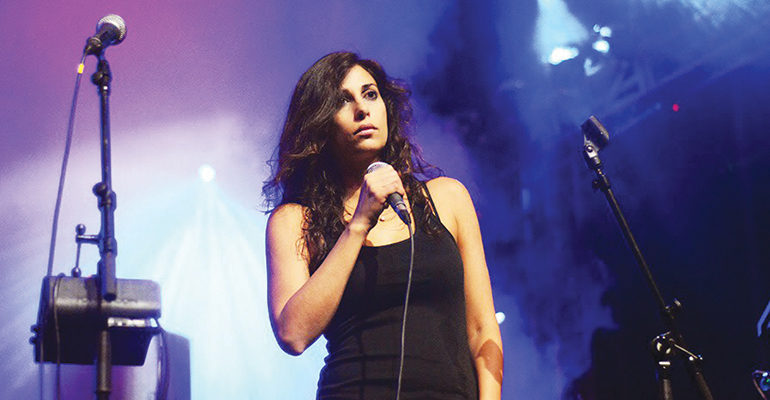 DETROIT — On Friday, Dec. 7, Lebanese singer Yasmine Hamdan performed a concert at the Detroit Institute of Arts’ Rivera Court, during her first visit to the city.

On the previous day, she visited the Arab American National Museum in Dearborn for a viewing of Jim Jarmusch’s film, “Only Lovers Left Alive”, in which she appeared, and engaged in a talk with the audience.

Hamdan discussed her musical beginnings, as well as the effect that growing up in Lebanon has had on it.

“It was a very particular period, because after the civil war, after 15 years (of it), people were starting finally to awaken, to get organized, to live,” she said. “And so it was at that moment I started doing music. It was very exciting because it felt like everything could be possible. There was big hope for change.”

She added that it was right before social media.

“Things were still more local, more secretive maybe, more confidential,” she said. “We started touring in the Arab world and everywhere we went, we had the audience waiting for us; so we realized our music was smuggled in and diffused in a very underground way. It was a great adventure.”

Hamdan said her music is mostly shaped by the Lebanese Civil War.

“The first civil war was a 15-year civil war, chaotic between so many factions and for so many different reasons,” she said. “I mean, now we know. I know at least that people who did the civil war — who, by the way, are still in power — they created this chaos; they created this destruction because they wanted to take over the country and to rule and to become richer and to govern in a fascistic way. They’re still creating the same tensions. Maybe we’re not in war, but the components have not been dealt with.

It’s legal mafia,” she added. “It’s nothing else. You know, it’s mafia taking over, willing over the country… So, it’s more complex than that.”

She also said she thinks the Lebanese are amazing. “They have this amazing joy of life, but I think they’re missing the point of questioning abuse and questioning wars,” she said. “And it’s important to do it because if you don’t do it after the civil war, then you don’t do it 10 years later, then you find yourself with the same problems. And so maybe people don’t want to change.

“I don’t know,” she added. “I’m just… it’s very difficult to have a clear idea of why things were not dealt with in a more intelligent way. But there are so many great initiatives and so many interesting people on the ground trying things. But it’s always, you know, different energies fighting.”

She also spoke about her musical influences.

“I’m influenced by rock, by pop, by old Arabic music, even by Indian music, any music that I like, really,” she said. “I just try ideas when I compose and I meet musicians and the result is sometimes an album or a live performance.”

She added that it’s difficult for her to pick the name of her genre or put herself in a box.

“The main narrative is I sing in Arabic and I explore and experiment with it,” she said. “I formed a band [at] the end of the ’90s and it was after the civil war. It was a little bit before social media, you know what I mean?

“We stopped Soapkills in 2005,” she added, referring to a duet she co-founded in 1997. “And then I had an album with Mirwais [Ahmadzaï, the producer who produced Madonna’s Music, American Life, and Confessions on a Dance Floor], but we only released it in Europe.”

Hamdan said she’s been fighting against “boxes” in the music business.

“When you’re Arab and you sing in Arabic, even though your music is not traditional or whatever, they put you in the box of ‘world music,’” she said. “So, with the Jim Jarmusch movie it was amazing because artists, we don’t care about boxes and don’t care about those borders that are imposed on us somehow. Maybe it’s the way people are used to consuming, I don’t know. But when I appeared in his film, it put me in front of the right public because the audience that watches a Jim Jarmusch movie is kind of an adventurous audience. It was a gift.”

She also said she was hopeful for the future of women.

“I believe it’s challenging to be a woman, no matter where you come from or what you do,” she said. “We live in a very patriarchal society, so it’s been challenging throughout the years. I believe it’s getting better. Myself, at least, I’ve always aimed and worked at being free as an artist and a woman. It’s been a very strong drive and an important one for me.”

According to Hamdan, the situation for women in the Middle East is too complex to sum up with a single answer, but change is happening.

“It depends on which country you want to look at, what social class, etc.,” she said. “There are many organizations working on gender issues, on women’s rights. The new generation is very much aware of those questions and those discussions and are very active.

“Hopefully this positive energy and positive dialogue and awareness and initiatives will become more concrete on the ground,” she added. “It’s an ongoing battle and it’s happening everywhere, even in the States.”