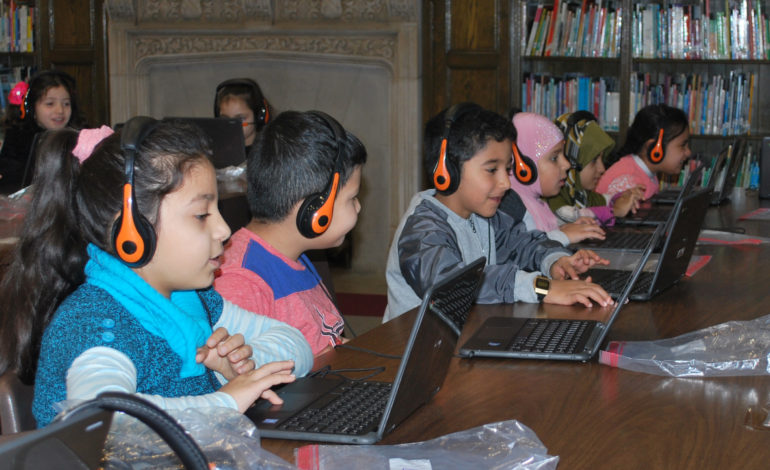 Maples Elementary School in Dearborn was recently recognized as a National Distinguished School for its success in helping at-risk students succeed. Here students use computers in the media center. -Photo from city of Dearborn

DEARBORN – Maples Elementary Schools has received a national award recognizing the success of its students despite difficult circumstances.

The National Association of ESEA State Program Administrators named Maples a 2018 Distinguished School.  Only 100 schools, two from each state, receive the award each year for exceptional student achievement. All the schools recognized qualify for funding under the federal Title 1 program, which supports low-income and other at-risk students.  ESEA, the Elementary and Secondary Education Act, created Title 1.

Principal Donna Jakubik said the school’s mission is to provide an exceptional learning environment that empowers every student to succeed in life, today and in the future. The staff at Maples always emphasize that the family is supported in any way needed; they build a partnership with the family so they can then academically support their children’s learning.

She furthered explained that the support for families includes such things as finding community resources for new immigrants to recently assisting after a family suffered a fire in their home.

Maples qualified in two of three categories eligible for the award.  The school ranked the best in Michigan for closing the achievement gap between the lowest and highest performing students and it showed excellence in serving special student populations. The other category is exceptional performance for two consecutive years.

The Distinguished School award is based on the last two years of data.  About 79 percent of Maples students are still learning English and 98 percent are from low-income families.  Even with those demographics, the number of Maples students scoring proficient on Michigan standardized tests was above the state passing rate and far above — more than double — the average of schools with similar demographics for the last three years, according to the state’s MISchoolData.org.

The Distinguished School award will be presented at the 2019 National ESEA Conference from January 30 to February 2 in Kansas City, MO.  Four of the eight Michigan finalists for the 2018 award were from Dearborn Schools. The other nominees included McDonald, Stout and Salina Intermediate.

Maples has also received other recognition over the years for its students’ success.  Last year, Bridge Magazine honored the school for outstanding achievement based on growth and its success with at-risk students.