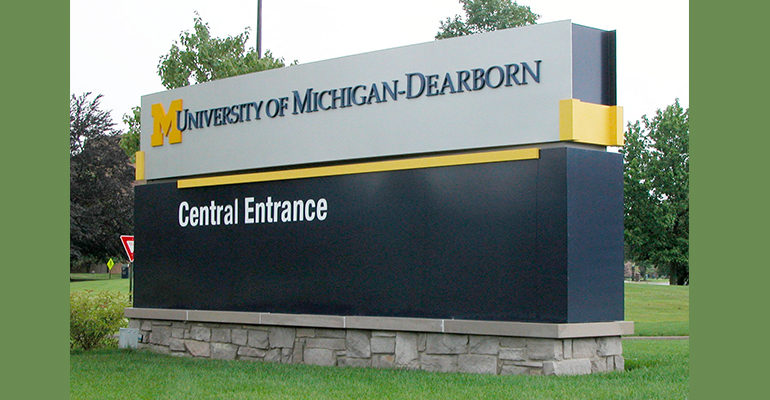 DEARBORN— A group of University of Michigan-Dearborn students are accusing administrators of trying to silence their voices.

Jenin Yaseen, vice president of U of M-Dearborn’s Students for Justice in Palestine, the only Palestinian student organization on the campus, said she started seeing push-back from university leadership when the student senate passed a divestment resolution she authored in early 2017.

At the March 2017 regent’s meeting, U of M Board of Regents member Mark Bernstien called the resolution Yaseen authored an “intellectually bankrupt and morally repugnant expression of anti-Semitism.” “[Bernstien] was very hostile toward the resolution, so I spoke out and talked about Palestinian inclusion,” she said. “He said very volatile, disrespectful things to me, something a regent should never say to a student.”

Bernstein did not respond to The AANews’ requests for a comment by press time.

Yaseen also said she was harassed by fake Facebook accounts following the resolution.

After Yaseen demanded a public apology from Bernstein, she said Dr. Sally Howell, the head of the Center for Arab American Studies at U of M-Dearborn, pressured her and the rest of the SJP to attend a “closed-doors, no journalists” meeting with him.

“I felt so uncomfortable meeting with someone so willing to be hostile to me in a public room where there are journalists,” Yaseen said. “I can’t imagine what he would say to us behind closed doors.”

She initially refused and said Howell arranged “a third party” to attempt to convince her to go.

The members of the SJP officially declined to attend that meeting on Oct. 3 2017, three days before it was to be held.

Yaseen said Howell subsequently organized a public panel on Boycott, Divestment and Sanctions, a Palestinian-led movement against Israel, “behind [SJP’s] backs” this past October, but Howell said the BDS event came together “very last-minute” and that she contacted and arranged with speakers who were already in town for an Ann Arbor event.

“I was heavily involved in BDS when my resolution passed,” Yaseen said. “It’s what we’ve been doing for years. For her to arrange this BDS panel completely without our knowledge was very offensive. We have always been on the front lines, but we were just made to be subjects at the event. We felt completely frustrated with it.” The speakers decided to drop out of the event based on the SJP members’ concerns, which resulted in the event being canceled.

“As soon as I confirmed with [the speakers] I wrote to our student groups and faculty and invited them to participate,” Howell said about the event. “I did not hear back from students until I received emails from students about how they were frustrated.”

She said she’d never previously been contacted about student activism organizations feeling concerned about their voices.

Yaseen said that instead of responding to the student organization’s concerns, Martin Hershock, the dean of the College of Arts, Sciences and Letters, implied during a meeting in October that a faculty member may have manipulated SJP into intervening with the BDS panel event.

“We felt like our voices were belittled,” she said. “We felt like they thought we didn’t have the capacity to speak for ourselves.”

Yaseen also said SJP members were told by their advisor, Ronald Stockton, a longtime political science professor at U of M-Dearborn, that he believed the student organization had no right to voice its concerns to the intended speakers.

“It seems like Arab folks have become a matter of study for non-Arabs in the Center for Arab American Studies and not a central voice that drives projects and discussion,” said Jordan Yunker, a non-Arab and research chair of the SJP. “In the situation with the dean, it was an attempt to reframe student activism, to make student power seem less potent than it really is.”

According to Yaseen, SJP members discovered on Nov. 27 that a map of the Middle East at an exhibit by the Center for Arab American Studies called “Unsettled Lives, Iraqi Refugees in Metro Detroit” neglected to include any mention of Palestine.

“There was Israel on it with no West Bank; there was no Gaza Strip,” she said. “We felt like we’re not there, that we don’t exist to the director of Arab American Studies.

“Instead of really being sorry about it, they seemed to just say that we were taking value away from Iraqi work,” she added. “We never did that. Our concern was that we weren’t included and that there weren’t enough Arab people advising and overseeing the project as well.”

Yunker said she thought the administration tried to reframe SJP’s intentions in publicly pointing out the incorrect map.

“To suggest that an observation about a map somehow devalues the work was not at all the goal,” Yunker said. “Palestine is important not only to Palestinians.”

Yaseen said SJP members received email communications from those working on the project only when they prompted them about how and when the map would be changed. Howell said she didn’t “have a timeline” of how long it took to fix the map.

“As soon as the mistake was called to our attention we fixed it,” she said. “What more can you ask of people?”

“They tried to delay until next semester, when the map would be moved,” said SJP President Jasmine Rabie. “They weren’t going to change it where it stood.”

“We were working on a deadline, as people often are when they’re doing public exhibitions,” Howell said. “We proofed and checked a lot of things, but somehow the map got past us.

“There were other errors in the exhibit which we’re also fixing,” she added. “We misspelled the word ‘refugee’ in one place; there were other things like that that we’re correcting. It was a student-lead project and you know things just, there were a lot of moving parts. It’s actually a large and complex exhibition.

“As far as I’m concerned there’s not really a story here,” she told The AANews. “We made a mistake. We printed the map without proofreading it carefully enough; so as soon as it was brought to our attention we fixed it right away. So, to me it’s not a story when a person makes an error and fixes it and acknowledges it.”

Map without Palestine included,(Left) Map with edits made to include Palestine (Right)

Yaseen, a first-generation Palestinian American, said the lack of Palestinian representation on the map reminded her and other Palestinian students at U of M-Dearborn of oppression she said she personally faces daily.

“It reminds me of the amount of villages that were demolished and of my family, who are currently under an apartheid system,” she said. “It’s not fair for me on my own campus to see my people not even on the map. It feels like an attempt to erase my identity.

“It’s very jarring to see that at the Center for Arab American Studies,” Yunker said.

Howell said she still encourages the public to go see the exhibit, which documents a history of Iraqi migration to Detroit and Dearborn, including photography and quotations from oral histories.

Howell received her Ph.D. from the American Culture Program at the University of Michigan and has co-authored and edited many books, including “Citizenship and Crisis”, “Arab Detroit 9/11: Life in the Terror Decade” and “Old Islam in Detroit: Rediscovering the Muslim American Past.” She is currently working on finishing a book entitled “Halal Metropolis: Mosques, Markets and Neighborhood Development.” She’s worked with the Arab American community for several years.

“We teach amazing classes,” Howell  said. “We offer opportunities for students to pursue their own research and we are working very hard to help the Arab American community represent itself to the public in a variety of ways that will counter the Islamophobic and anti-Arab narrative that’s out there in the world. And we’re doing a very good job of that despite this one mistake we made.

“I’m aware that there is one student organization on this campus that has issues with me right now,” she added. “In this semester it has come to my attention. I have written that student group and asked for them to meet with me and that is the only thing in my power that I can do.”

Howell said the issue needs to be resolved between herself and the students.

“One student organization, you know, sometimes they have personality conflicts or political conflicts with faculty, that’s completely normal,” she said. “But we work with a lot of different groups and our job is not to privilege the voice of one group over another, but to try our best to work with all the groups.”

Yaseen said at least two other student organizations share the SJP’s concerns of silenced student voices, but aren’t ready to speak out publicly.

“She has a responsibility as the director of the center to be accountable to the Arab campus community and we feel she has failed at that,” Yunker said of Howell. “We collectively want people to know that students are capable and driven to speak in our own voices and we will resist our narratives being misrepresented by people that have no stake other than personal gain.”

Not every U of M-Dearborn student feels that way about Howell. Before the release of this article, Batoull Haidar, a former student of Howell’s and a Lebanese Dearborn native, called the AANews to say that Howell’s “biggest thing was to ensure promoting diversity” in her studies.