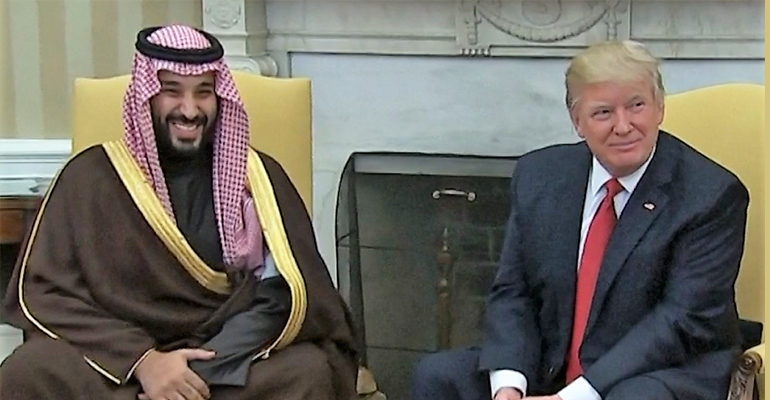 The U.S. Senate voted to end U.S. military support for the war in Yemen.

WASHINGTON — The U.S. Senate delivered a rare double rebuke to President Trump on Saudi Arabia on Thursday, voting to end U.S. military support for the war in Yemen and blaming the Saudi crown prince for the murder of journalist Jamal Khashoggi.

The votes were largely symbolic because to become law the resolutions would have to pass the House of Representatives, whose Republican leaders have blocked any legislation intended to rebuke the Saudis.

In a historic move, Senators voted 56-41 to end U.S. military support for the Saudi Arabian-led campaign in Yemen.

It was the first time either chamber of Congress had backed a move to withdraw U.S. forces from a foreign military engagement under the War Powers Act.

That law, passed in 1973 during the Vietnam War, limits the president’s ability to commit U.S. forces to potential hostilities without Congressional approval.

Seven of Trump’s fellow Republicans joined Senate Democrats to back the measure.

Immediately after the Yemen vote, the Senate unanimously passed a resolution blaming Saudi Crown Prince Mohammed bin Salman for Khashoggi’s murder and insisting that Saudi Arabia hold accountable anyone responsible for his death. The Senate votes to end U.S. involvement in the war of Yemen.

“Unanimously, the U.S. Senate has said that Crown Prince Mohammed bin Salman is responsible for the murder of Jamal Khashoggi,” Republican Senator Bob Corker, chairman of the Foreign Relations Committee, said. That is a strong statement. I think it speaks to the values that we hold dear.”

Trump has said he wants Washington to stand by the Saudi government and the prince. He promised to veto the war powers resolution. The White House declined comment on the joint resolution beyond pointing to his previous veto threat.

But backers of the resolution and of action against the Saudis, including some of Trump’s fellow Republicans, promised to press ahead.

“What’s next is to do everything possible to demand that the House of Representatives do what the members of the House want done, an opportunity to vote on this,” Senator Bernie Sanders (I-VT.) told Reuters.

Sanders, an independent who caucuses with Democrats, said he would bring the resolution up again in the new Congress, when Democrats will control the House of Representatives. The measure could pass the Senate again, given the bipartisan support it received on Thursday, even though Trump’s Republicans will have a larger majority next year.

“I think we’re going to win in the Senate,” Sanders said, “and I think we are going to do what the American people want, that is to end our participation in this horrific and destructive war.”

Senator Gary Peters (D- MI) spoke on the Senate floor in support of the bipartisan legislation.

“Yemen is experiencing the worst cholera outbreak in history with over 1 million cases,” Peters said. “In recent months the crisis has accelerated, growing at a rate of 10 thousand cases each and every week.

“The air campaign in Yemen, led by Saudi Arabia, is now in its third year,” he added. “And every day, every day, it makes the humanitarian crisis in Yemen worse. Bombs dropped by Saudi Arabia are killing women and children, destroying roads and bridges, disabling electricity and water services and leveling schools, hospitals and mosques.

“Meanwhile, the government of the Kingdom of Saudi Arabia, and Crown Prince Mohammed bin Salman, stand credibly accused of ordering the murder of a United States resident and journalist known for his criticism of the regime.”

There was no immediate word from House leadership on whether they would allow a vote on either of the resolutions.

Earlier on Thursday, Representative Steve Scalise (R-LA), the number three House Republican, declined to respond when asked whether he would support a House vote on legislation seeking action against Saudi Arabia.

“There certainly is an appetite in our caucus for that,” Pelosi, who is expected to be the next House Speaker, told reporters.

Israel draws condemnation for forced removal of Palestinian family, demolition of their home