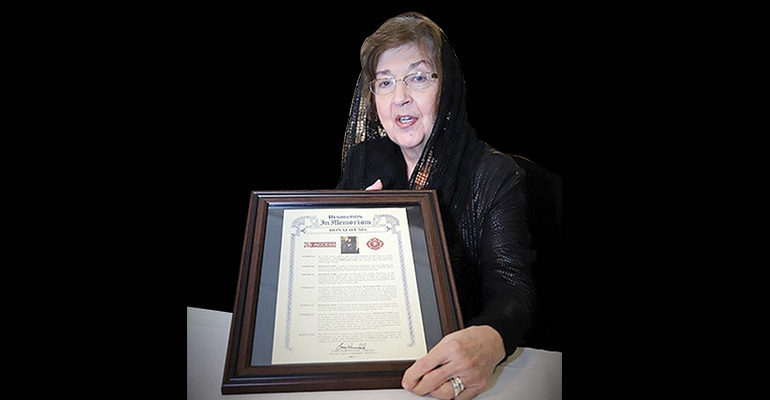 Nancy Unis, widow of the late Don Unis holds a special tribute for her husband presented to her by Wayne County Commission Chairman Gary Woronchak.

DEARBORN — Friends and family of pioneering Arab American leader Don Unis gathered at the House of Condolences on Dec. 5 for a memorial service arranged by AAPAC.

The center was originally created by a coalition of five Lebanese American businessmen and brothers to honor their late father, Hajj Jamil Bazzi, as a place where Muslims, Christians and others alike could go in remembrance of their loved ones.

It was a fitting location for services for Unis, a tireless worker for disenfranchised Arab Americans from the Southend of Dearborn to the west side of the city and beyond.

“We have truly lost one of our own,” said recently elected Wayne County Commissioner Sam Baydoun. “To me Don Unis was a trail blazer; Don Unis [blazed] the trail for many of us, including myself and all the people who ran for public office.”

But it wasn’t just people with aspirations of becoming political leaders whom Unis helped. His influence stretched throughout the Arab American community in ways that could only be seen by walking a day in his shoes.

“I sat in a coffee shop with him on the Southend during Ramadan and people gave him envelopes of money, people would give it to him (rather than even imams and other community leaders) because that’s how much they trusted him,” said Sally Howell, director of the Center for Arab American Studies at the University of Michigan-Dearborn, about her days spent in the marginalized Southend area of Dearborn where Unis performed grassroots service work in the working class industrialized community.

Howell said she became a historian because of Unis— “The stories he told me and the way he made me care about this place” — and because of his enthusiasm and energy for the many causes on which he worked. Unis was a co-founder of both AAPAC and ACCESS, but mostly he was a fighter for the underprivileged people he met on a day-to-day basis.

“He made it seem like every day that happened in this community was an important day,” Howell said. “Not just for Dearborn, but for the history of the country.”

As much as he was a caring servant, Unis was also a protector in even the most controversial of times, including when he stood up to former U.S. Secretary of Defense Chuck Hagel at Byblos Banquet Hall in Dearborn.

“When Chuck Hagel called the resistance in Lebanon terrorists, it was Donny who stood up and shouted at him and told him, ‘You are not allowed to say this in this hall; this is an insult to all of us and you have to apologize,'” said The AANews Publisher Osama Siblani, who added that Hagel started walking back his statement.

Other speakers included Yemeni American Benevolent Association co-founder Ali Baleed Almaklani, who recited a poem for Unis in Arabic and English; Assistant U.S. Attorney Abed Hammoud; former Dearborn School Board member Aimee Schoelles and former Wayne County Commissioner Gary Woronchak, who issued a proclamation of condolences to Unis’ family that will be made a part of the public record.

Schoelles became emotional as she recalled the difficult times, including the fight to build much-needed schools on the east end for the growing Arab American community.

“I know every generation says this, but you don’t know how bad it used to be,” Schoelles said.  “…At that time they had about 2,400 students in trailers and the board did not want to build additional schools.”

However, Unis joined with AAPAC and others, including herself, in getting involved politically.

“The board didn’t want buildings in the east end being built, but Don was there, inspiring us when we needed it the most,” she said. “Through it all he was an optimist; he was never a complainer.”

“There’s so much about Don, but the word that keeps coming to my mind is unsung hero,” Hammoud said.

Siblani said Unis gave him a “shot of confidence and hope” whenever he entered the room and added that he hopes future generations will remember and continue his legacy in the years to come.